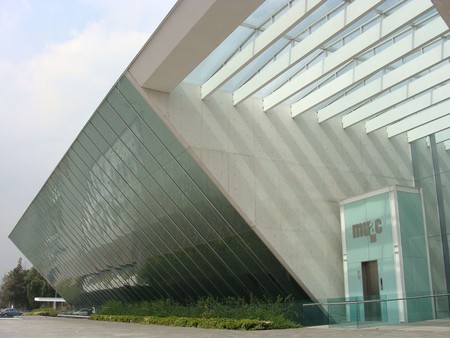 Mexico City’s Ciudad Universitaria (CU) is a massive complex of buildings and outdoor spaces that make up the campus of Mexico’s Universidad Nacional Autónoma de México or UNAM, as it’s colloquially called. CU could be thought of as a series of circles, with the inner-most circle the oldest part of the University. Here is our guide to Ciudad Universitaria, Mexico City. 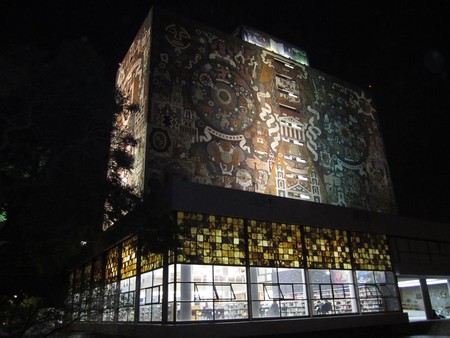 Before it was built in the 1940s and 50s all of Mexico City’s major universities were in the city’s historic downtown.

CU lies just south of the well-known Mexico City colonia San Angel. The campus is massive and sprawling, hosting thousands of students on its avenues and in its buildings every day. The oldest, most central part of the campus is home to the Departments of Philosophy and Literature, Law, Economics, Medicine, Chemical Engineering and Architecture, as well as the school’s administrative offices. Each department has its own areas to eat, as well as a hoard of bicycle deliverymen who show up around lunchtime selling everything from tacos to sushi to slices of cake. The Department of Architecture has a great cafeteria which is considerably more expensive than the others around and the Engineering department has a cafeteria called “Cibarium” with real waiters! In front of the Philosophy and Literature department there are lots of street food stands hawking hotdogs, chilaquiles, vegan food, fritangas and hamburgers – just about anything you fancy. 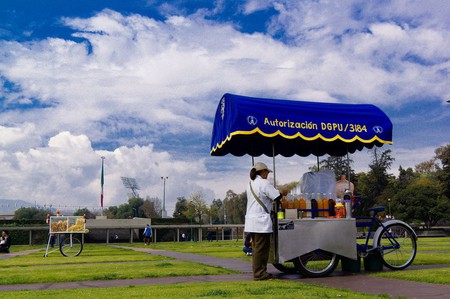 To one side of the administrative buildings is the Estadio Olímpico, home of the 1968 Mexico Olympic. Now the stomping grounds of the UNAM soccer team and the second largest stadium in Mexico (the first is Estadio Azteca), the stadium was designed to look like a volcanic crater and was built with volcanic rock. Its architects may have been inspired by the fact that the area where CU is located was created by a lava flow from the nearby volcano – the construction of the campus was a Leviathan feat in removing much of that ancient lava. 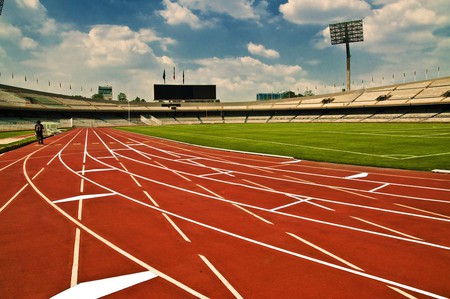 Olympic stadium on the UNAM campus

North of the CU’s historic center is Metro Copilco, surrounding it are a surprising number of restaurants, cafes, shops and bookstores that cater to UNAM’s student population. Between the border of CU and these buildings there was once a never-ending row of street food stands offering cheap eats. Recently the police removed most of the vendors, but if history is to be our guide, they’ll be back soon enough. Walking around this area is interesting, especially seeing the office and bookstore of Editorial Siglo XXI, one of Latin America’s biggest book publishers. This is also the location of the Centro Universitario Cultural (CUC), a non-profit organization that offer language classes and other cultural programs.

To the south of CU’s central ring you will find the Department of Sciences, the Engineering Annex, and the Political Science Department. There is a great taco spot here called “Watsi” and a student cafeteria where everyone has to wash their own plates. There are also, of course, lots of street food stands and roving vendors.

Even further south is the Centro Cultural Universitario with various concert halls and theaters. Once upon a time this center’s Nezahualcóyotl Hall was one of the best places in Latin America to see a concert. Appreciate art at the Museo Universitario Arte Contemporáneo (MUAC), one of the city’s most emblematic contemporary art museums, a modern, geometrical building that sticks out in the aging architecture and volcanic rock of its surroundings. Visit Mexico’s National Library and newspaper archives as well as the famous Espacio Escultórico, where you can climb all over Federico Silva’s circular crater sculpture to get a better view of the Reserva del Pedregal de San Ángel (REPSA), the nature reserve that butts up against this part of the campus. The lauded Azul y Oro restaurant is tucked among the libraries and movie theaters of this part of CU. What seems like an ordinary university cafe is actually home to chef Richardo Muñoz’s incredible ode to pre-Hispanic and modern Mexican cuisine. 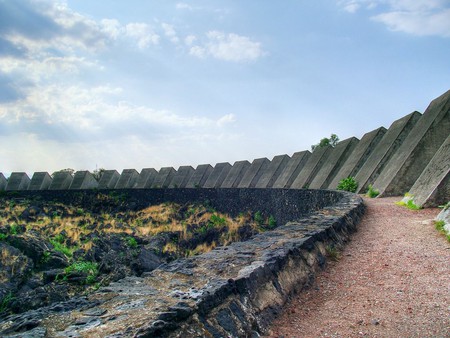 To the west of the Centro Cultural is an area of CU known as the “back of the stadium” where visitors can see another section of the Reserva del Pedregal de San Ángel (REPSA) and the botanical gardens of UNAM’s biology department. This beautiful natural gem, hidden in the middle of the city is a must-see and on weekends there are often open-air concerts held. There are trails for running and hiking but opening hours are limited. This area of CU is also where you will find the newest university buildings and various scientific collections on display.

Whether you are making a Saturday trip of touring or thinking about starting a masters program at UNAM, Ciudad Universitaria provides endless things to do, see, eat and drink for all ages. Underrepresented in Mexico City guidebooks, CU is a unique part of the city’s history and in important facet of its present.