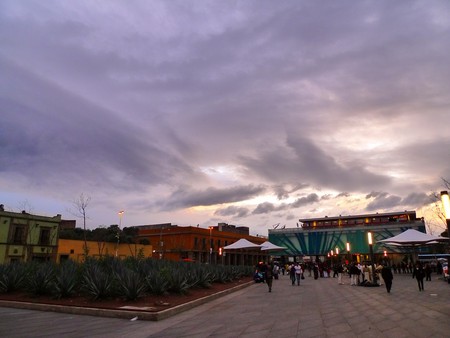 There’s no shortage of sights, sounds and activities for the Mexico City-based music fan. Whether you like leafing through racks of vinyl records or listening to some good old mariachi in the open air, we’ve got you covered in this music lover’s guide to Mexico City.

Where to listen to music in Mexico City

Aside from these fantastic concert venues, where you’re likely to see a ton of big-name international artists and groups playing regularly, there are plenty of spots to listen to more specific genres in Mexico City. Here are just three.

There’s no better club than Mama Rumba for commercial salsa music and dancing ‘til the break of dawn in Mexico City. Having been based in the Roma neighbourhood for over 25 years, Mama Rumba is an icon of the city and overwhelmingly popular with locals and passing visitors alike. Unsurprisingly, Cuban salsa and spirits reign supreme at this salsa hot spot, alongside the Cuban beer favourite, Bucanero.

You can’t visit Mexico City and not stop by Plaza Garibaldi if you’re a music fan, given that it has a country-wide reputation for being the site of many a roaming mariachi band. Sure, the best place to hear mariachi is undeniably in its birthplace of Jalisco, but if you’ve only got time to stop in the capital city, this is the place to be.

Reggae fans unite at Cultural Roots, which charges a small cover fee for entry and plays some of the best live reggae DJ sets and laid-back tracks that will set the scene for a great night out in Mexico City’s historic centre. Here they serve beer by the caguama (1.2-litre bottle, usually) for a respectably low price considering the central location, and the airy terrace and colourful artworks decorating the walls of this creaky old house are nothing to be sniffed at.

Where to shop for music in Mexico City

There are tons of vinyl stores in Mexico City, especially in the hipster zones of Roma Norte and Sur, and you can even pick up records in La Lagunilla market. Below we’ve listed a select pick of stores, but you can click here for a more extensive rundown.

Latest releases abound at La Roma Records, a relatively recent addition to the Mexico City music store scene. They stock everything from T-shirts and collectables to books and magazines, and even turntables that will delight the music-maker DJs amongst you. If you’re looking to sell some of your old vinyl, this is not a bad place to check out either, as the owner is supposedly open to buying.

If you prefer independent music to slightly more commercial new releases, then Discos Mono in Roma Norte is ideal, as they’re known for having some of the weirdest and wonderful vinyl options in the Mexican capital. If you think that translates to a random selection of obscure records, though, you’d be wrong – rather, every disc is carefully picked, and the store’s stock is always well curated.

Revancha has a well-deserved reputation for selling everything soulful in Mexico City, making this the place to be for R&B, soul and even Afrobeat fans. You can also find plenty of hip-hop, dub and cumbia, if that’s what floats your boat. Either way, it makes for a great spot to browse and potentially stumble upon your next favourite record, whether you’re a super fan of soul or not.

Of the many, many songs inspired by the capital, we’ve selected just two that are total must-listens by two of the country’s biggest bands.

Maldita Vecindad, the granddaddies of the famed Mexican ska scene and Mexico City natives themselves, have produced some of Mexico’s iconic songs, including ‘Kumbala’ and ‘Pachuco’. However, one of their most impressive tracks that’s clearly influenced by the capital city is ‘Un Gran Circo’, which takes on the tricky topic of urban poverty, classism and economic disparity.

Excluding the excellent Maldita Vecindad and Café Tacuba, as they’re the two aforementioned Mexico City bands behind songs about the capital, these are the other two groups that you need to listen to before coming to Mexico City.

Provocative Mexican rock band Molotov, with their US-born drummer Randy Ebright, brings together bilingual lyrics that are both sung and rapped and often touch upon genuine social issues in a comically clever, albeit sometimes controversial, way. Take, for example, their classic ‘Puto’ or ‘Frijolero’, the latter of which talks of US-Mexico tension and racism; it is still relevant 14 years after it was released. That’s without touching upon the incendiary ‘Gimme The Power’, which talks about the need to overhaul the Mexican government.

It’s impossible to visit Mexico City, or Mexico in general, without stumbling across a Los Ángeles Azules song or 20. Hailing from the southern delegación of Iztapalapa, this cumbia-big band-tropical group is a staple of the Mexico City music scene, with songs such as ‘El listón de tu pelo’ and the unmistakable, catchy ‘Cómo te voy a olvidar’. We dare you not to dance after hearing one of them.