A Guide to Visiting the Orozco Murals in Guadalajara 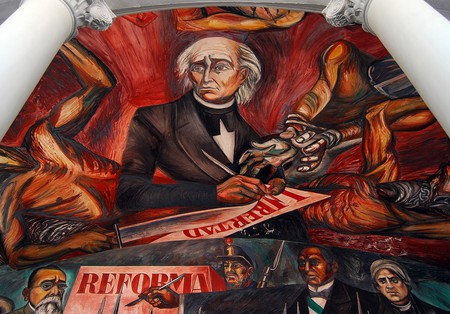 Little known outside of Mexico, the muralist José Clemente Orozco was one of the “Big Three” painters, along with Diego Rivera and David Alfaro Siqueiros. His striking, often macabre artwork was characterized by his extensive use of black and deep reds, portraying an anger at social injustice in Mexico and beyond. But Orozco also had a subtle eye for detail that is only really revealed when you take a closer look at his paintings. Although there are examples of his art in New York and California, his true masterworks are found in the public buildings of Guadalajara.

Where better to start an Orozco tour of Guadalajara than in the artist’s former workshop and home? Opened by Orozco’s widow Margarita Valladares in 1951, El Museo Taller José Clemente Orozco contains a number of his paintings and the panels on the walls provide additional information on his life. Inspired by the great satirical illustrator José Guadalupe Posada, Orozco learned at a young age that art could be a tool to challenge the powerful. Yet his life and career were derailed at the age of 21, when he injured his left hand while working with gunpowder to make fireworks. Gangrene set in and his hand and wrist were amputated to save his life.

As he healed from the injury and loss, Mexico was also experiencing a period of great upheaval. A revolution was brewing that would mark Orozo’s worldview forever.

Unlike Diego Rivera, who viewed the Revolution as an entirely positive development, Orozco took a darker view. His artwork reflects his worries about the massive death toll of the conflict that lasted from 1910 until 1920.

The frescoes in the Instituto Cultural Cabañas

This concern with violence is powerfully reflected in Orozco’s masterpiece in Guadalajara’s Instituto Cultural Cabañas. Now a UNESCO World Heritage Site, this elegant Guadalajara building was once used as an orphanage and hospital. The walls and ceilings of the building are lined with 57 frescoes that take aim at authority figures and depict history as a brutal, bloody struggle. 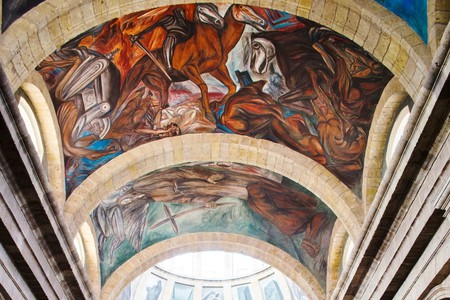 A Spanish conquistador is depicted astride a two-headed horse, the blood-stained bodies of indigenous Mexicans laying at his feet. The shadowy figure of Philip II, the King of Spain, stares out at the bloodshed from behind an imposing wooden cross. 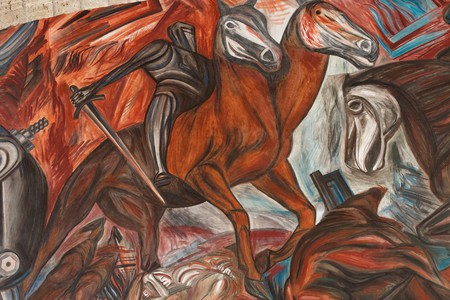 It is clear these struggles were not simply historical for Orozco. A terrifying robot horse gallops through the painting, awakening a terrifying sense that industry and technology have the power to enslave us all.

The most famous fresco in the collection is known as “Man of Fire,” and depicts a man being consumed by flames – destroyed but invigorated by this final blaze of glory. 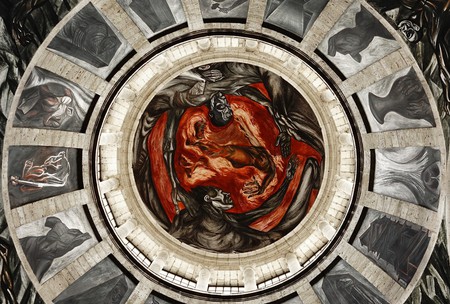 As visitors pass through the building, there are clever visual illusions: heads appear to turn and mechanisms seem to move.

A smaller dose of Orozco murals can be found in the Palacio de Gobierno, or Government Palace, near the cathedral. “The People and Its Leaders” mural is found above the main staircase and depicts the revolutionary leader wielding a flaming torch to ignite the independence movement.

Hidalgo is celebrated in a second mural in the building’s Chamber of Deputies, where he frees Mexico’s slaves by signing the word “freedom” – albeit with a deep, blood red that suggests the human cost of this breakthrough. 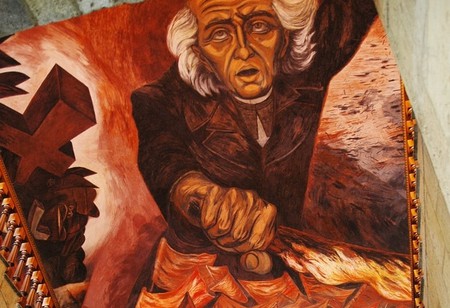 “The People and Its Leaders” | © Wonderlane / Flickr
Give us feedback