A Guide To The Palacio De Bellas Artes 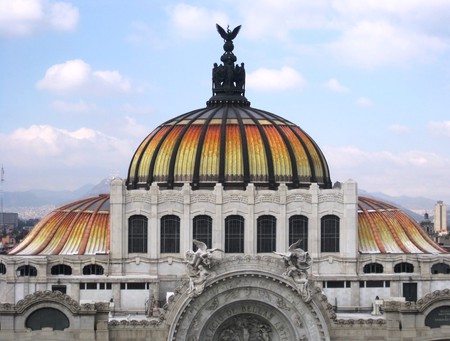 The Palacio de Bellas Artes is one of Mexico City’s most popular and frequented destinations, visited by around 10,000 people weekly and loved as much by tourists as it is by the locals. This building is instantly recognizable due to its elegant, ornate, white Carrara marble façade and shimmering, dragon scale roof tiles. Here’s our guide to the breathtaking Palacio de Bellas Artes.

Italian Adamo Boari began construction on the Palacio de Bellas Artes in 1904, but it was halted both before and during the period of the Mexican Revolution. Originally due to take four years to complete, it actually took 30! However, Porfirio Diaz managed to lay the inaugural stone before construction was interrupted. The project was restarted again under the watchful eye of Mexican architect Federico Mariscal in 1932, and the Palacio as we know and love today was completed by 1934. Sinking continued to be an issue (as with most of Mexico City) and reports suggest that the theatre has sunk around four meters since 1904. 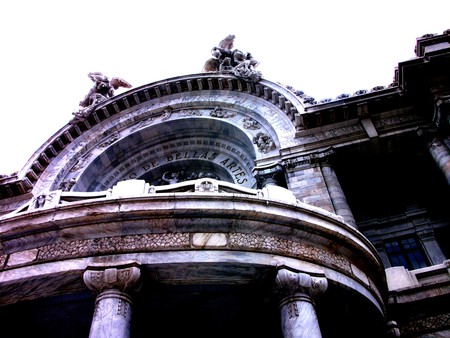 The striking architecture is, as previously mentioned, one of the most impressive and awe-inspiring elements of the Palacio de Bellas Artes, however, it is not just one single style; it is an amalgamation of several turn-of-the-century architectural movements, such as art deco, neoclassical and art nouveau. The reason for these many different styles is the change of architect mid-project; Mariscal designed the art deco interior, whereas Boari designed the external neoclassical/art nouveau façade. The façade and interior are decorated with various sculptures designed by Leonardo Bistolfi and Agustí Querol Subirats amongst others. The Palacio itself can be divided into three sections: the offices of the Instituto Nacional de Bellas Artes, the main hall and adjoining rooms which spread across three levels and the theatre which has a stunning stained glass ‘curtain’ made of almost a million pieces of Tiffany New York glass. The top floor of the main hall is the Museo de Arquitecture, and the Museo de Bellas Artes. 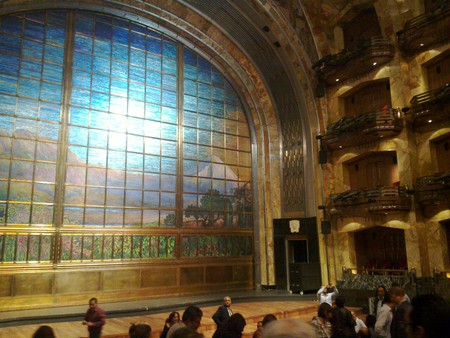 Aside from the Museo de Bellas Artes and the Museo de Arquitectura, the Palacio De Bellas Artes is also particularly well known for its murals by artists such as Diego Rivera, David Siqueiros, Rufino Tamayo and José Clemente Orozco. These artworks can be found predominantly on the first floor of the main hall, although there are some Tamayo pieces on the ground floor. Examples include the Tamayo pieces ‘México de Hoy’ and ‘Nacimiento de la Nacionalidad’, Rivera’s four-part ‘Carnaval de la Vida Mexicana’ and Siqueiros’ three-part ‘La Nueva Democracia’. 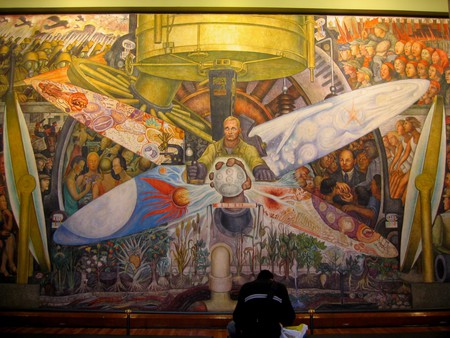 The Palacio de Bellas Artes is best known for playing host to the twice-weekly Ballet Folklórico de México, as well as the Compañía Nacional de Ópera de Bellas Artes and the Orquesta Sinfónica Nacional. It is also the site of almost constant exhibitions about poetry, painting, sculpture, literature, music and photography. Annually, the Premios Ariel are held there, as well as the Premio Quorum. As a result, it is the most important cultural centre in Mexico and was recognized by UNESCO as an artistic monument in 1987.

Bellas Artes | © impermeableazul/Flickr
Give us feedback