A Guide to the Mayan Underworld in Playa Del Carmen 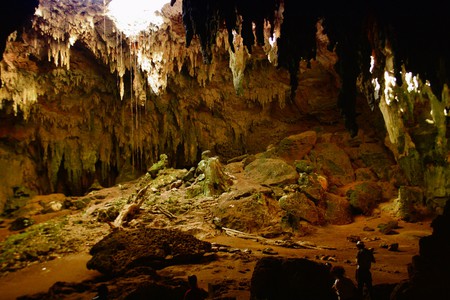 Few people know the mysteries and folklore around the stunning sinkholes, and the amazing caves and rivers beneath the Riviera Maya. Of mystical nature and great scientific interest, the pristine waters under Quintana Roo are bringing explanations of great wealth for the region. Read the following story and learn about the mysterious Mayan underworld in Playa del Carmen.

Deep under Yucatán and Quintana Roo there’s a system of waters made up of thousands of sinkholes and underground rivers. In recent years information has been gathered suggesting that three of the longest underground rivers in the world are located in this region of the Mexican Caribbean: Ox Bel Há (90 miles/146km long), Dos Ojos (36 miles/58km long), and the main river, Sac Actun (96 miles/155km long). Important discoveries in the caves and waters include the fossilized remains of the oldest human body ever found in America. Just a few years ago, the Mexican archaeologist Guillermo de Anda discovered temples of worship, ritual ways and spaces built to perform ceremonies. And findings keep coming: in 2015, through three-dimensional Electrical Resistivity Tomography methods, a sinkhole under the pyramid Kukulcan, in Chichén Itzá was discovered. These amazing underground wonders had a great spiritual importance for Mayans, who used to call it Xibalbá, what we today know as the Mayan underworld. 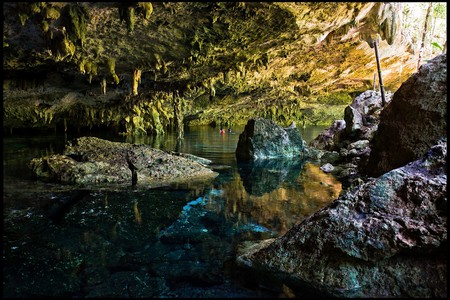 What is the underworld?

There are two theories about what the Mayan underworld was: they called it Xibalbá, which roughly translates as “place of fear.” One theory comes from the Popol Vuh, a Mayan book of great historic and spiritual value, written by an Indian in 1550 to explain the origin of the universe and other phenomena. According to this sacred book, the Xibalbá has a negative connotation: it’s a place of darkness inhabited by devils.

The route to the underworld was described in the Popol Vuh as similar to the caves that channel the underground rivers. First, there’s a steep slope that ends at the edge of a river, which crosses prickly ravines. Next, there are more rivers, including one of blood, which open up to a four-way crossing: one red, one white, one yellow, and one black. The black route leads to the room of the council of the Lords of Xibalbá – cave divers haven’t gotten to this point yet, but it is nonetheless known that underground rivers are connected. There are stormy passageways that the lords ask you to navigate through: six rooms containing in turn darkness, cold, jaguars, flying bats, sharp razor blades, and flames. The underworld was assumed to be some sort of Catholic hell, governed by evil lords of sickness and death: Hun-Camé and Vucub-Camé. 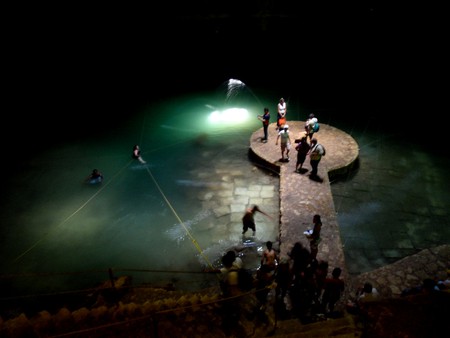 Xibalbá: an underworld of light or darkness?

There are some factors to consider about the interpretation of the Popol Vuh: The first translation of this book was made by Francisco Ximénez, a Spanish priest who gave an explanation from a Catholic perspective in a time when the Catholic church was trying to impose its religion onto the Mayans, so everything from the old belief had to be discarded. Indians were even tortured to confess locations of cenotes that held spiritual significance. Later on, investigations demonstrated that Ximénez modified the translations of the book in order to introduce the Christian doctrine.

The other theory about Xibalbá has a positive connotation. Unlike Christian belief, Mayans believed that life arises in the interior of the Earth (not in heaven), so they considered that caves were places full of light and life. They thought that spirits of the dead descend to the underworld to be cleansed of all transgression and personal history, and reinserted into a different element or human being for the beginning of a new life. Descending into the underworld meant to acquire knowledge in a fertile place. Caves were, then, powerful spaces of important energy and supernatural forces. This description seems to be more aligned with what we feel when descending into these peaceful places. 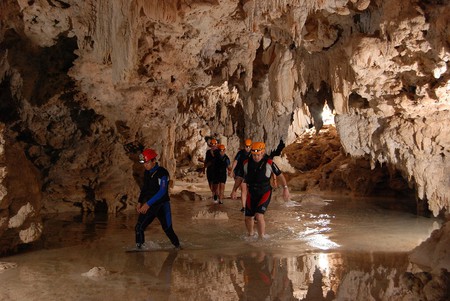 The solved mysteries of the Xibalbá

The Mayan underworld has also made it possible to discover important facts that explain the past. So far, the stalactites in the caves have revealed the weather’s evolution, which are of great contribution to analyzing strong storms and droughts of today, and also to reveal the possible cause of the Mayan collapse. Nowadays you can experience for yourself the entrance of Mayan underworld, by snorkeling in a sinkhole, descending an 82-foot (25m) drop to swim in the Secret River, walking in Aktun Chen caves or, if you are adventurous, diving into the Sac Actun. 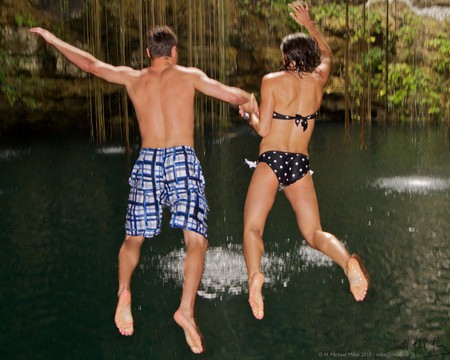 Jumping in a sinkhole | © H. Michael Miley / Flickr
Give us feedback