A Brief History of the Mayan Ball Game 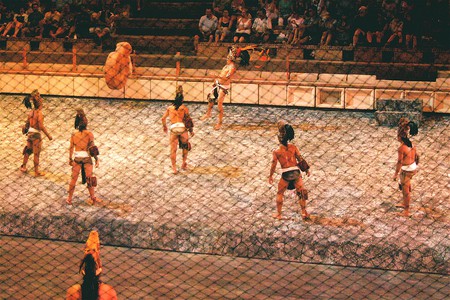 Like every civilization, the Mayans had their own belief about the origin of the universe. Although Spanish colonization tried to delete every trace of their culture, the Popol Vuh – “Maya Bible” – and recent discoveries help us understand more about their theories to explain such an enigma, all in just one sacred ritual: the Mayan ball game.

The legend of the battle in the underworld

The Mayans were excellent scientists, architects, artists, mathematicians, and astronomers who could predict phenomena such as eclipses. The walls of its constructions reveals the story of the Mayan ball game, which they called Pok-ta-pok, due to the noise produced by the ball when it was hit by the players or hit the floor. They believed in the existence of a place of darkness called Xibalba (translated as “place of fear”), an underworld located deep below the ground and sea, in caves and cenotes, where the spirits go in the afterlife. The legend recounts that the brothers Hunahpú and Ixbalanqué, who represented the luminous side of the cosmos, went to the underworld to fight against the beings of death and darkness. They were sacrificed and transformed into the sun and the moon. During the rise of the Mayan civilization, the game became an ancestral tradition, in which the rite represented the entrance to the underworld in order to have a fight between light and darkness. 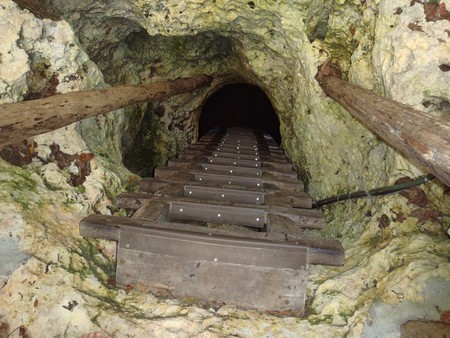 The elements of the game

The ball court, at the base of the temple, represented the underworld, constructed with a sunken shape that eluded the Xibalba. Its walls, engraved with figures of Mayan gods and demons, had a ring that the ball had to pass through. The platforms around it were for the governors and priest to watch the game. The ball represented the paths of the sacred stars (sun, moon and Venus); it was made of rubber, measured 35 cm, and weighed around three kilograms, without air inside.

Only the best warriors of the community could participate in one of the two teams. In the game, they wore headdresses and paint, leather skirts (of some sacred animals) or loincloths, and protectors on the hips to cushion the impact of the ball and to increase the speed of the rebound.

Before the game, they prayed to Hunahpú, a Mayan god who was sacrificed after losing a game. The players had to kick the ball with their hips, elbows, knees, and forearms and not let it drop – as that indicated a ‘bad sign’ – and once the ball passed through the rings on the walls, the game was over. Everything was under the supervision of a central referee. 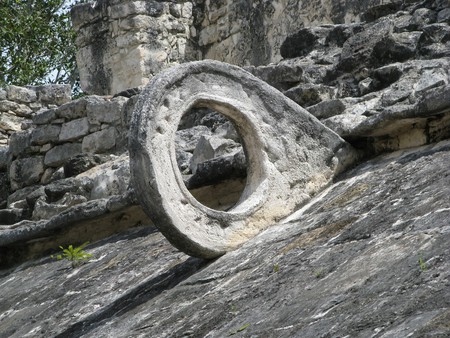 The reasons for the ritual vary. On one hand, they used to do it to maintain the order of the cosmos and the fertility of the lands (triumph of life) in times of shortage (evils of man). On the other hand, it was considered a substitute for war. It also served to get a response from the gods: one team represented a “yes” and the other a “no” – the answer depended on who won the game. When the Spanish colonized Mexico, the game was still going on, but without a religious meaning: instead of human sacrifice, the winner got slaves along with gold and jade.

The ball game of the 21st century

There’s a probability that the ball game wasn’t distinctive of a particular group – just recently, a court was found in Mexico City, in an Aztec temple, underneath a 1950s-era hotel. The game is still practiced in Central and North America, but just as a cultural activity, and it is exhibited in Europe, in meetings of traditional sports. In the preview of the 2006 FIFA World Cup in Germany, the ball game was part of the official cultural program, since “pok-ta-pok is what football is today.” Nowadays, there’s a modern version called Ulama, practiced in Sinaloa.