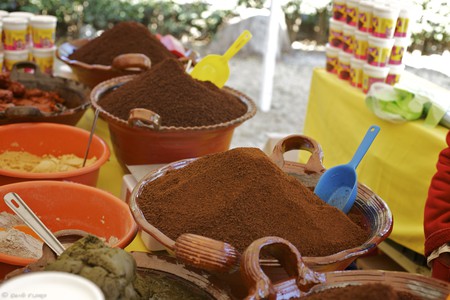 While chiles en nogada may be the dish most visually representative of Mexico, with its tricolor trifecta of ingredients, mole (pronounced mo-LAY) is the undisputed national dish of the country. However, this thick, rich sauce, often served with meats and rice, comes in far more forms and varieties than many people realise. Here’s your brief history of the dish that’s loved up and down Mexico.

The name mole comes from the Nahuatl word for sauce – mōlli – and is the generic name for several variations of rich sauces that come in colors like yellow, red, black and even green. Other moles are named for their ingredients and flavors, such as pipián, huaxmole and almendrado. However, as a rule of thumb, all moles contain some combination of nut, fruit, and chili. Over the years, mole recipes have gradually become more elaborate. As well as being served with meat, alongside rice, leftover mole is often used to make the filling for tamales or as an alternative topping for enchiladas; in fact, enchiladas topped with mole are called enmoladas. Variations on the most common moles include Taxco’s mole rosa, a mild pink colored sauce, as well as Tlaxcala’s mole prieto. 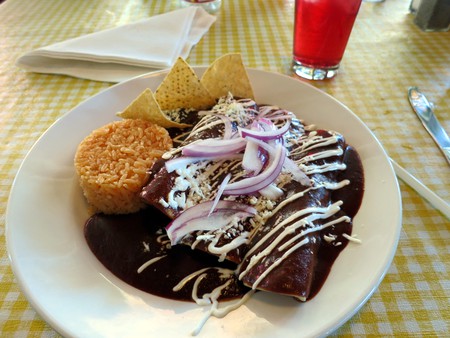 Making mole is a time-consuming labor of love, usually reserved for special occasions. To make mole from scratch, individual ingredients must be roasted and ground before being combined with stock to form the paste. This is cooked over a low heat, and stock is continuously added (alongside additional ingredients), until it reaches the desired consistency. Several different chilies can be used either alone or in partnership to form the base of the mole, including ancho, pasillo, chipotle and mulato. The preparation of mole is not easy, as many moles (particularly those originating in Oaxaca) are known to have 30+ ingredients. However, nowadays, mole can be bought in powder form or in a pre-made paste, which speeds the preparation process along somewhat. 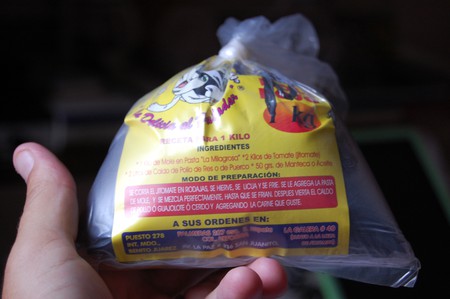 There are many legends surrounding the invention of mole. One alleges that a convent in Puebla created the dish in a panic from what few ingredients they had, due to the impending visit of an archbishop. It went down a treat served up with roasted turkey. Other tales suggest that several spices accidentally got mixed up, and thus mole was born. A further story dates back to Mesoamerica, when Moctezuma served it to Cortés when he arrived to Mexico, mistakenly thinking he was a god. Either way, the origins will likely remain a mystery, given that the first written recipes for mole only came into existence after the War of Independence in 1810. 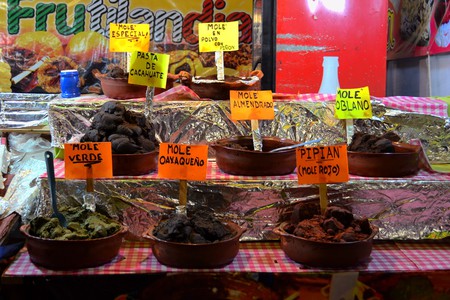 The two regions best known for their respective moles are Oaxaca and Puebla, although Tlaxcala also claims to be its place of origin. Puebla’s most famous mole is without a doubt its namesake mole poblano, the most internationally recognized mole and the variation that if classed as the official national dish. This dark-brown colored dish uses chocolate and chilies. Oaxaca, on the other hand, is often nicknamed the land of the seven moles; colorado, mole negro, mancha manteles, verde, amarillo, chichilo and coloradito. The most famed of Oaxaca’s moles is mole negro, a mole poblano-esque dish that also uses chocolate but throws in hoja santa too. Another key mole producing region is the Mexico City town of San Pedro Atocpan, Milpa Alta. It’s said that this region produces almost 90% of the mole consumed in Mexico City and that over 90% of the population there make their living from mole production. While this town hosts one of the country’s many annual mole fairs each October, the largest pot of mole ever made was actually at Puebla’s mole festival – it served over 11,000 people.