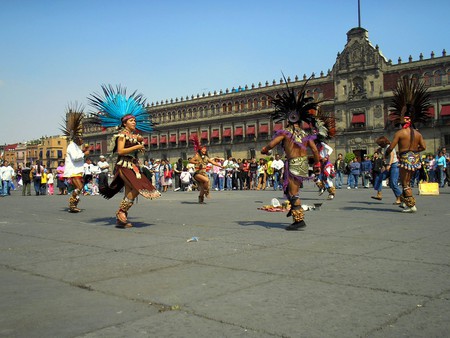 Dancing at the zócalo | © Gustavo M/Flickr

The Mexico City zócalo – or to give it its full title, Plaza de la Constitución – is one of the Mexican capital’s most well-known landmarks and plazas. This historic spot dates way back to the time of the Aztecs, and is surely one of the city’s most historically and culturally intriguing destinations. With that in mind, here’s our brief history of this fascinating plaza – the Mexico City zócalo.

Formally known as Plaza de la Constitución, this grand square once constituted the ceremonial hub of the Aztec city, Tenochtitlan, and was previously called Plaza de Armas or Plaza Principal. In fact, the term zócalo (meaning ‘base’ or ‘plinth’) as a description for a central plaza was only adopted into the common Mexican lexicon in the 19th century. Supposedly, plans had been made to construct a large monument in the centre of the plaza, but nothing apart from the plinth was ever constructed, hence the term zócalo. While the plinth disappeared, the name stuck and even spread to other large cities across Mexico, which begun to use the term zócalo to refer to their principal squares.

Zócalo with a view of the cathedral | © LWYang/Flickr

However, even though the zócalo existed during the Aztec period, it was only post-colonialization that it began to take the form we see today, due to the architectural decisions of Alonso García Bravo. Previously dominated by looming silhouettes of Tenochtitlan’s temples and pyramids, such as the Templo Mayor, the zócalo nowadays finds itself ringed by similarly significant and emblematic buildings such as the Metropolitan Cathedral, the Palacio Nacional (built over the ruins of the last Aztec emperor’s former palace), the Old Portal de Mercaderes and Federal District buildings. 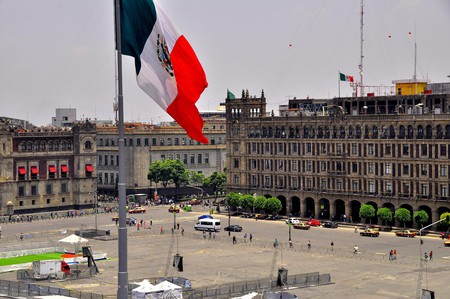 Flag of the zócalo | © pegatina1/Flickr

In Aztec times, the zócalo was a gathering place, as well as the site of rituals, ceremonies and parades. This is a legacy which continues to this day, as the zócalo regularly finds itself the centre of national events, concerts and festivals, such as the annual Independence Day celebrations and Alebrije Parade. Mexican super-group Café Tacuba played here to a crowd of almost 100,000 people, whereas Shakira allegedly attracted more than 200,000 people to her concert. In 2007, an artificial ice rink was even constructed over the zócalo. It was also the site which bore witness to the discovery of the famed Aztec Calendar stone, which can now be seen at the Museo Nacional de Antropología, as well as being the location of daily Aztec dances. However, not all social functions on the zócalo are so positive. Due to its potential for large capacities of people, it has typically been the location of protests against the government. Well-known examples of this include the 1968 protests against then-President Gustavo Díaz Ordaz, as well as the more recent 2008 protests against crime and 2014 protests against the Ayotzinapa student kidnappings.

Dancing at the zócalo | © Gustavo M/Flickr 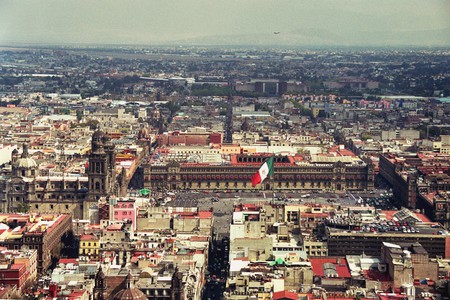 Zócalo from above | © Andre Deak/Flickr

In contrast to many city plazas (of which it is incidentally one of the world’s largest examples, measuring in at 57,600 square meters), the zócalo does not currently feature monuments or statues; it instead displays a single, but enormous, Mexican flag in its centre. This was not always the case though; in the 17th century, the plaza was teeming with street vendors and market stalls, despite the construction of a Parian. Furthermore, fountains were previously located at each of the plaza’s four corners, the Estatua Ecuestre de Carlos IV by Manuel Tolsá called the zócalo its home for a period, and in the 19th century there was even a streetcar station constructed there. However, by the late 20th century, the zócalo was in a major state of disrepair, which prompted a successful $300,000,000 renovation project, which returned it to its former glory.