Lovingly called El Ángel, the independence monument on Reforma Avenue in Mexico City is an unmistakeable symbol of Mexico’s capital. Golden and glorious, the winged statue of victory hovers above the traffic, chaos, protests, and tourists that pass beneath her feet each day. Understanding the Angel is understanding the city, so here are some fascinating facts you should know. 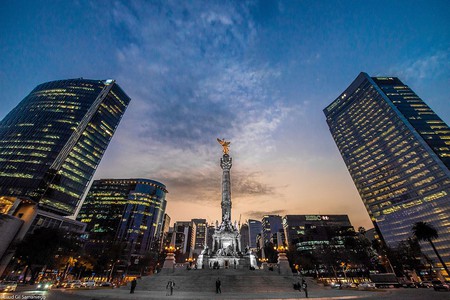 She Almost Didn’t Get Built

The history of this famous angel was rocky. Various public bids were held in the mid-1800s for designing a monument to commemorate Mexico’s independence from Spain, but the instability of the government during those years meant that no decision was ever made. In 1843 a version of the Angel started to be built in the city’s main plaza, but the project was abandoned midway because of lack of funds. When architects finally started building at the Angel’s current location in 1906, an entire side of the monument collapsed and they had to start over again from scratch. We’re lucky she made it to completion. 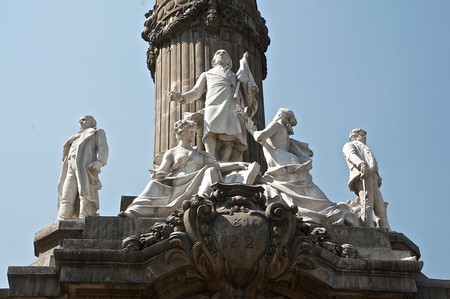 Base of the Angel of Independence, Mexico City

She’s More Than an Angel

The Angel as we know her was finally finished in 1910, in time to commemorate 100 years of independence from Spain, and in time to be present for the start of Mexico’s next revolution, which would rage from 1910 to around 1935. The Angel is actually a winged statue of Victoria, the ancient Roman goddess of victory. She holds a crown of laurel in one hand (to place on the heads of the triumphant independence insurgents) and a broken three-link chain in the other, to symbolize three centuries of Spanish rule in Mexico before Mexicans rose up and broke from Spain.

Today’s statue of the Ángel de la Independencia is actually a copy of the original, which fell from its pedestal and broke into several pieces during an earthquake in 1957. The column itself was reinforced, the interior stone staircase changed for metal, and the statue of Victoria completely replaced. During the 1985 earthquake, the Angel remained standing, but suffered much damage to her base and to the steps leading up to the monument. 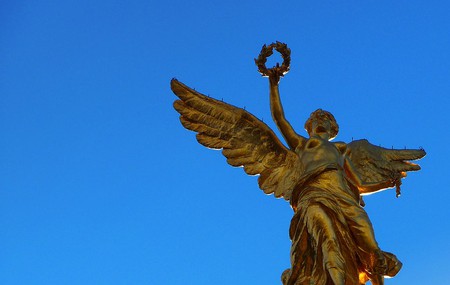 Ángel de la Independencia with her laurel and chain

She Hides a Morbid Treasure

Within the base of the Independence Angel is a tiny mausoleum with the remains of Mexico’s greatest generals and instigators who were active during the fight for independence. Ignacio Allende, Miguel Hidalgo, Juan Aldama, and Don Nicolas Bravo lie here, among others, along with the remains of one woman, Leona Vicario, one of Mexico’s first female journalists, and an activist and funder of the independence movement.

She’s All About Selfies

Anyone who lives in Mexico City will tell you that one of the most frequent sights at the Ángel de la Independencia is a group of teenagers dressed in their finest, posing to take photos for someone’s quinceañera celebration (a massive party hosted by a girl’s family when she turns 15). Parked around the edge of the traffic circle are often long SUV limousines and proud parents looking on. In addition to the taffeta and tuxes, hundreds of tourists camp out on the stairs surrounding the Angel every day, snapping selfies with the winged protector of Mexico City. 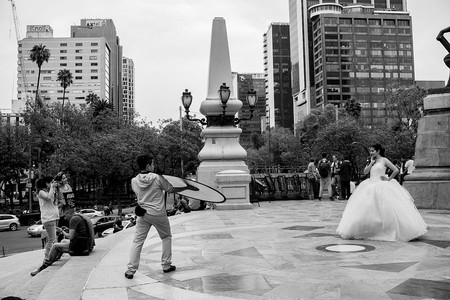 Quinceañera photoshoot at the Angel

Tours to the Angel on a normal day include only a walk around inside the statue’s base and its mini-museum in honor of the independence fighters, but with advance notice and a special permit, groups can ascend the statue’s winding inner staircase and go all the way to the top of the Angel for a glimpse at the city below – a breathtaking site.

She Won’t Be Silenced

The Ángel de la Independencia is the focal point for the frequent and massive parades and protests on Reforma Avenue. Each year she is overrun with locals trying to get a glimpse of the National Pride Parade (where you just might find an Ángel de la Independencia lookalike in the crowd) and her base is often draped with banners protesting everything from transgenic corn to NAFTA to the current president’s administration. As a symbol of Mexican freedom, this monument represents many movements. 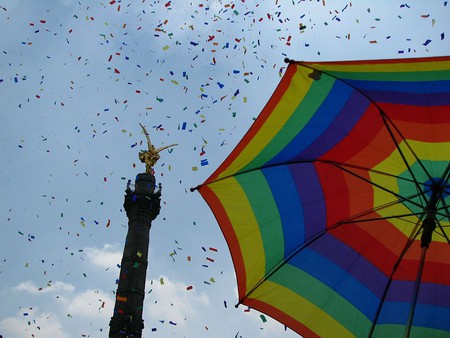 Her Bodyguard is an Irishman

William Lamport, or as he’s known in Mexico, Don Guillén de Lampart, stands guard at the entrance of the Angel’s inner sanctum holding his cloak, eyes lifted towards heaven. Lamport was executed in 1659 after a failed attempt to organize an uprising against the viceroyalty of Spain in the New World. He believed in equal rights for all, including indigenous peoples of Mexico and blacks slaves, and is thought to have written the first Declaration of Independence of the New World.

The Ángel de la Independencia is immediately recognizable across the world a symbol of Mexico City. Along with Reforma Avenue and the rest of its grand statues, the Angel was an attempt by President Porfirio Diaz to bring to Mexico City all the glory, class, and sophistication of the great European capitals. From the opening shots of the Netflix series Sense8 to to publicity videos, the Angel is unmistakable, breathtaking, and vital as a symbol of the city.