15 Songs That Will Make All Locals Proud to Be Mexican 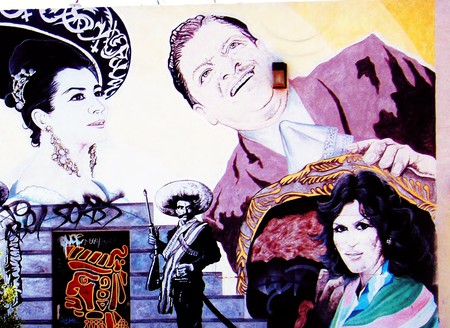 Music in Mexico is extremely diverse, with a wide range of genres and performance styles. But there are certain songs that all Mexicans will recognize and love. Whether it’s patriotic anthems or songs of broken-hearted love, here’s our playlist of the 15 songs that will have your Mexican friends singing.

Written by ranchera singer Pedro Galindo Galarza, there are countless versions of this dramatic favorite. With its rousing lyrics, the song rises to its dramatic chorus: “Viva México, Viva América.” One of the most popular versions of the song is performed by mariachi singer Aida Cuevas.

This traditional mariachi song was written by the composer Chucho Monge but is most closely associated with the iconic singer and film star Jorge Negrete. A powerful statement of loyalty for the land of Mexico, the song has been covered by almost every established mariachi singer. The most famous lines from the song state: “Lovely, beloved Mexico, If I die far from you, May they say that I’m asleep, And may they bring me back here.”

Many artists have performed this rousing song, but the most famous version is by Pedro Infante, a singer and actor who was an icon of Mexican cinema’s golden age. The song is still a favorite for Mexicans, and people broke into spontaneous outbreaks of the anthem after the most recent earthquakes struck the country in September 2017.

Another mariachi favorite, this patriotic anthem was originally written by Mexican composer Rubén Fuentes. The most famous version of the song is performed by Javier Solís, who was considered one of the “Three Mexican Roosters” of Mexican music and cinema, along with Jorge Negrete and Pedro Infante.

This ranchera classic was written by iconic singer José Alfredo Jiménez and has been performed by a wide roster of singers. The song was written during a period of depression when Jiménez was breaking up with the younger singer Alicia Juarez. A defiant and macho anthem in which the singer proclaims himself a king, the song strikes a similar tone to Frank Sinatra’s classic “My Way.”

The name of the original song’s author has been lost to history, but what is known for sure is that its lyrics refer to the famous Mexican story of “La Llorona.” The legend concerns the crying ghost of a woman who has lost her children and now searches for them endlessly in the river. There are countless versions of this Mexican classic, but the favorite is performed by Chavela Vargas, whose deep, dramatic voice brought the song to life in the 2002 film Frida, the story of the flamboyant Mexican artist Frida Kahlo.

The traditional Mexican waltz tells the story of a Zapotec woman mourning the death of her mother. The song has become the unofficial anthem of the Tehuantepec region, an area that has fascinated anthropologists for decades because of its matriarchal culture and colorful traditional dress.

In Mexico, the late superstar singer-songwriter Juan Gabriel is loved across the social spectrum. A unique talent and a gay icon in a macho, conservative society, Gabriel produced hit after hit until his death in 2016. His performances at Mexico City’s Palacio de Bellas Artes are the stuff of legend and his anthem of broken-hearted love “Por Qué Me Haces Llorar,” is an eternal favorite.

Composed by poet and musician Pepe Guízar in 1937, this iconic song is an emotive tribute to Mexico’s second-largest city. It has been performed by many singers, including non-Mexican artists such as Elvis Presley and Nat King Cole. One of the most famous renditions in Mexico is that of Guadalajara-born ranchera icon Vicente Fernández.

Alejandro Fernández, the son of Vicente, revitalized the ranchera genre with his rendition of “Como Quien Pierde Una Estrella.” The song appeared on the singer’s first album and instantly made him a star across Latin America.

This immigrant anthem by Los Tigres del Norte has taken on an added power with the rise to the US presidency of Donald Trump. A very catchy tune, the song reminds US citizens that Mexico once owned all of Texas, New Mexico, Arizona, Utah, California and Nevada as well as large parts of Colorado, Wyoming, Oklahoma and Kansas. “I’d like to remind the Gringo that I didn’t cross the border, the border crossed me,” is one memorable line.

Another catchy tune that addresses issues of racism and immigration, “Frijolero” by the rock group Molotov is a big favorite south of the border. An angry yet amusing song with lyrics in both English and Spanish, the song vilifies the 19th Century Mexican president Antonio López de Santa Anna. This bungling leader and general played a major role in Mexico losing more than half of its territory to the United States: “If not for Santa Anna just to let you know, that where your feet are planted would be Mexico!”

One of Mexico’s most original bands, Café Tacvba have been a major name in Mexican music for almost three decades. With influences ranging from punk to rap to electronica, the group has developed a unique and versatile sound. Their 2013 hit “Aprovéchate” is still one of the band’s coolest and most danceable numbers.

Banda music is popular throughout Mexico and Valentin Elizalde was a major star of the genre until he was murdered by a drug trafficking gang in 2006. Nicknamed “The Golden Rooster,” Elizalde performed some narcocorridos – songs that glorify violence and drug traffickers. Yet the star’s most famous hit, “Vete Ya,” was a much more innocent ballad about relationship drama.

Another banda singer who died an early death, Ariel Camacho was a talented performer whose songs maintained a slower, more melodic tempo than most regional Mexican music. The singer was killed in a car accident at the age of only 22, and his ballad “Hablemos,” became a posthumous hit.