10 Unique Dishes You Need to Try from Mexico 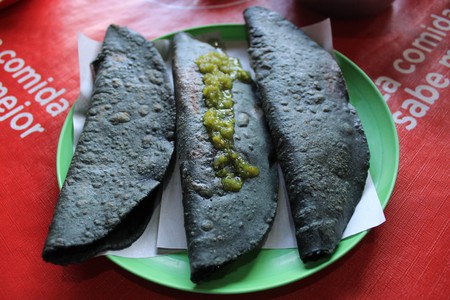 The culinary heritage of Mexico is breathtaking and each of the country’s regions specialises in its own dishes, drinks and flavours: head to Oaxaca for its moles, Mexico City for everything you’d ever want on a tortilla and Jalisco for the tequila (obviously). However, if you want to try something a little different on your trip to Mexico, these are 10 unique dishes to look out for.

Tlacoyos are most commonly found street-side in Mexico City, where they’re made right in front of you from fresh blue masa, vegetables and cheese. They are always vaguely ovular-shaped, look like a thicker version of a tortilla and are sometimes stuffed with soft cheese or chicharrones. The cooked tlacoyos are then topped with refried beans, sliced cactus and cheese. Easy to eat and usually under $15 pesos (less than $1 USD), tlacoyos are a CDMX must. 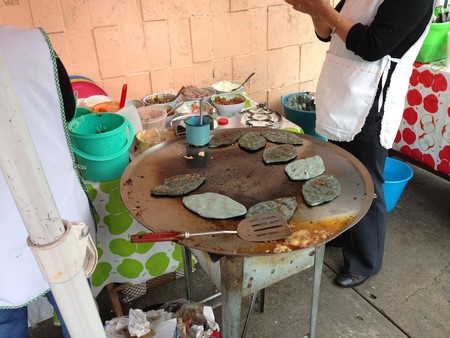 You’re most likely to stumble across chapulines (grasshoppers) in southern Mexico, especially in the states of Oaxaca and Chiapas where insects form a pretty staple part of much of the cuisine. While they can be added to quesadillas for some added protein and crunch, you should really enjoy them on their own as a kind of crunchy pre-Hispanic popcorn, sprinkled with salt and a squeeze of lime. 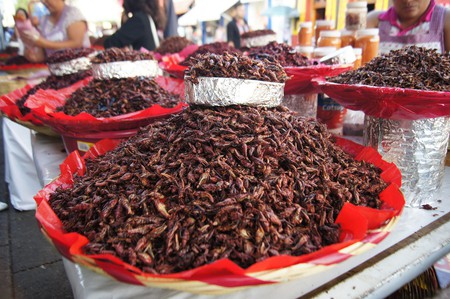 Sandwiches are, in general, a big deal throughout Mexico, but some get less time in the spotlight than others. Take the delicious guacamaya, for example. While it may share its name with the Mexican word for ‘parrot’, guacamayas are actually a street sandwich typical of the state of Guanajuato, and involve a healthy chunk of crispy chicharrón (fried pig skin) sandwiched in a bread roll and served with a tomato sauce that adds some much-needed moisture to the dish. 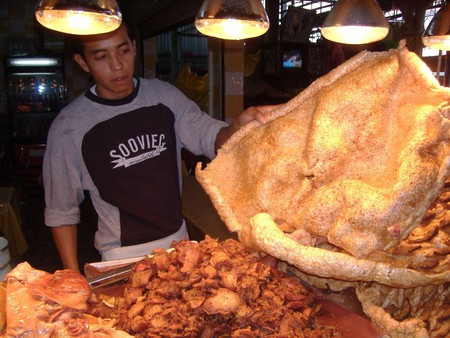 The chicharron filling that goes into a guacamaya | © Luigi Guarino / Flickr

Marquesitas are a traditional Yucatecan dessert, and combine one of the most surprising but delicious flavour combinations in the world—chocolate and cheese. Sure, you can order this rolled crispy crepe with anything from ham to dulce de leche, but the best versions bring together queso de bola (a cheese similar to Edam) and Nutella. 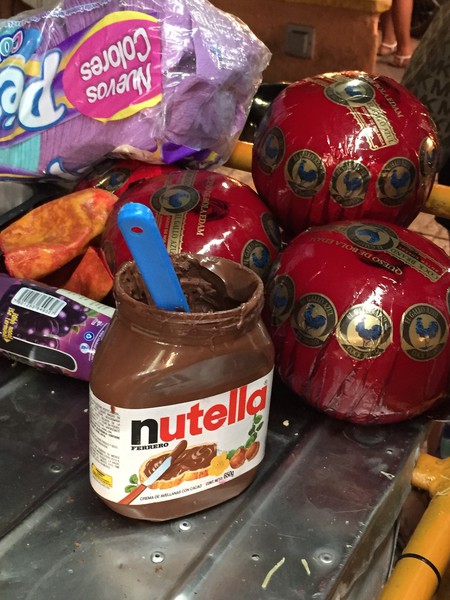 Hailing from the western state of Jalisco, tortas ahogadas are, quite literally, drowned sandwiches. Made from the typical birote bread (a lightly salted, baguette-style bread roll) of the region, tortas ahogadas are served with deep-fried pork carnitas plus fresh onion and radish before they’re doused in a spicy sauce that will leave you with swollen lips but a cured hangover. 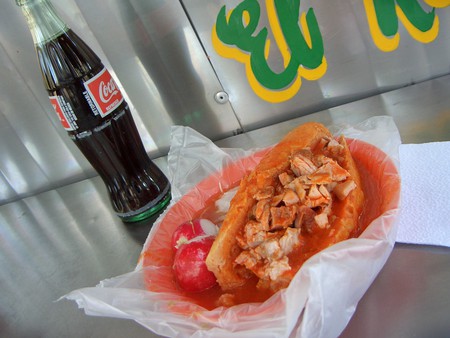 Sometimes written as ‘semitas’ rather than the more common ‘cemitas’, these well-filled sandwiches are a poblano classic generally served with a schnitzel-like piece of pork, onion, avocado, quesillo (a stringy, chewy, all-round delicious Mexican cheese), chipotle or rajas (poblano chili) and the all-important pápalo. Often described as similar in flavour to rocket (arugula), pápalo is an indigenous herb with a strong, peppery flavour and, as the poblanos say, if your cemita doesn’t have pápalo, it’s just a torta. 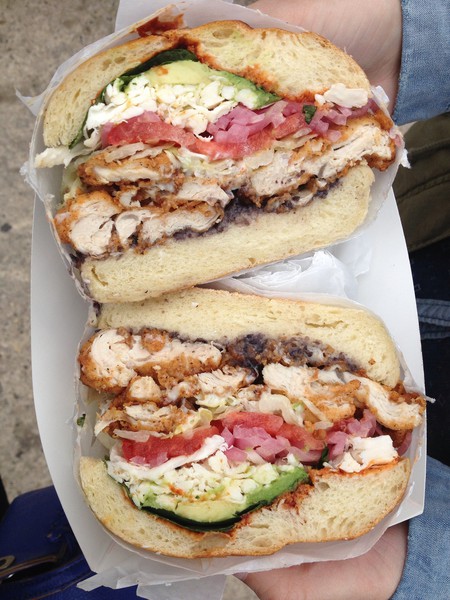 Quesadillas to the extreme, machetes are enormous, footlong cheese-filled tortillas (named as such because they resemble a machete) found in parts of Mexico City and the surrounding area. You might not be able to find them very easily on the street, but in markets and fondas (neighborhood restaurants) you’ll likely have better luck. Add whatever you want to the cheesy filling but perhaps bring a friend to help you finish it all.

If the aforementioned torta ahogada doesn’t cure your hangover, this tripe-filled broth should do the trick. Made from cow’s stomach that’s cooked until it’s super soft, plus a red chili base and hominy, menudo is sometimes referred to as pancita (little stomach). Most certainly an acquired taste, it’s served with onion, lime, cilantro, a spicy salsa, tortillas and a refreshing beverage. 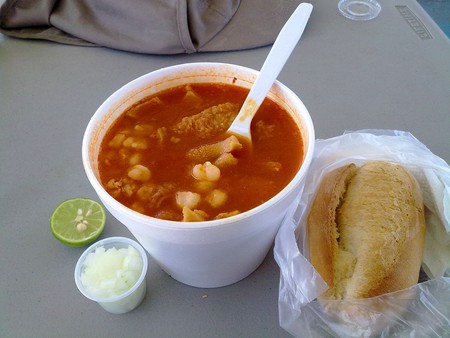 The only drink to make it onto this guide to unique Mexican foods is the fermented maize classic, tejuino. Traditionally found in the state of Jalisco, this orange-coloured drink is delightfully refreshing on hot days as it’s often served with lime-flavoured shaved ice bobbing on top. Though it’s certainly an acquired taste, it’s not as intense as other traditional Mexican drinks. 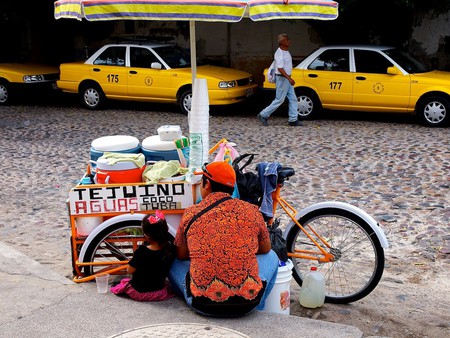 Finally, we return to Mexico City for our final entry, the pambazo. Notable for the bright red colour of the bread (which is actually acquired by soaking it in a guajillo chili sauce before frying), pambazos are a chilango staple and are usually filled with potato and chorizo, plus a healthy dose of crema, cheese, spicy sauce and lettuce. 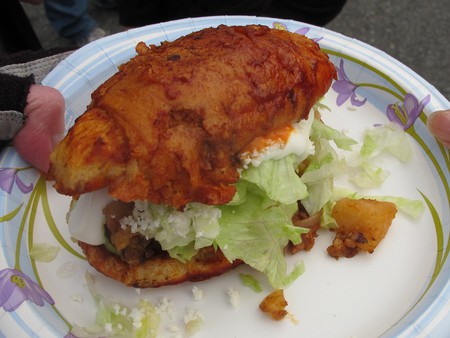 A delicious pambazo | © Gary Stevens / Flickr
Give us feedback