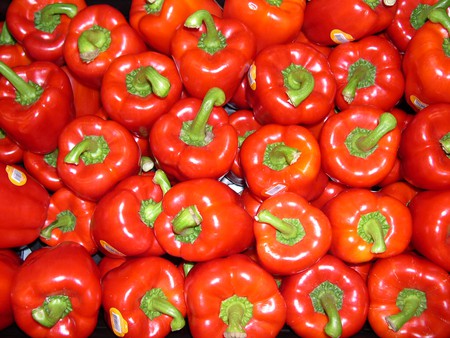 One of the most interesting (and enjoyable) things about traveling in Mexico is discovering its rich culinary tradition. Many of us believe we know Mexican food, and are sworn lovers of the cuisine. However, dishes that are integral to the country’s culinary culture are unknown to many outside of Mexico, and our ‘Mexican’ favorites are, in fact, ‘Tex-Mex.’ Originating from the southern states of the USA. Here, we take a look at 10 traditional Mexican dishes that you may not have heard of, and some that you may not even have guessed were Mexican. 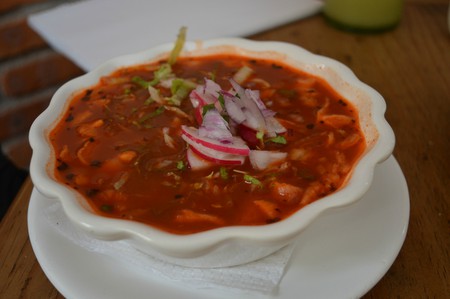 Pozole is a pre-hispanic dish consisting of a spicy broth usually containing pork or chicken and cacahuazintle corn. Maize was a sacred plant for the Aztecs and therefore pozole was consumed as a ritual or celebratory dish. Legend has it that the original meat used in pozole was human. Bodies of prisoners were allegedly added to the maize after their heads had been ripped off as a sacrifice. When Spanish conquistadors banned cannibalism, pork was apparently chosen because it tasted similar. There are three types of pozole, rojo (red), blanco (white), and verde (green). As with any national dish, regional and familial variations exist, but the pozole rojo is usually made with ancho and guajillo chilies and garnished with avocado, the verde is made using green tomatoes and serrano chilli, and the blanco made using de-seeded ancho chillies and often contains chicken instead of pork. The pozole is usually topped with shredded lettuce, cubes of raw onion, oregano, dried chilli, radishes and fresh lime juice, and served with a basket of tostadas. 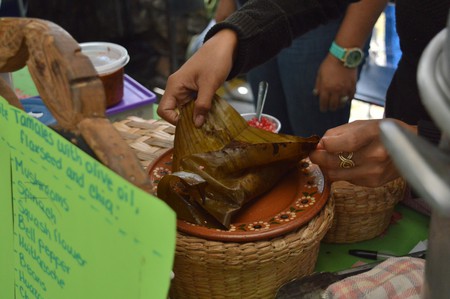 Tamales are made from masa, a dough made from maize and lard and steamed in either banana leaves or corn leaves, which are then discarded before eating. They can be filled with a variety of meats or vegetables. You can even get a tamal de dulce (sweet tamal), filled with fruit and often colored with pink food dye. Tamales without filling are called tamales sordos (deaf tamales). This dish dates back to the Aztec and Mayan cultures. Aztecs are known to have stuffed their tamales with turkey, rabbit and even flamingo, amongst other fillings. Traditional modern-day fillings are pork and chicken, but they can also be filled with beans or vegetables such as mushrooms, peppers or zucchini flowers. Tamales can be eaten by themselves, or are often served with guacamole, sour cream, salad or in a guisado (a tomato-based sauce). 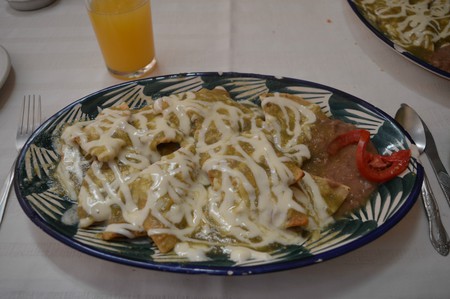 Chilaquiles are a popular breakfast and brunch dish in Mexico. Triangular tortilla chips, made from round corn tortillas, are cut into quarters and fried. The chips are then covered in salsa roja or verde (red or green salsa), sometimes they are lightly simmered in the salsa to soak up the flavors. Then, cheese and cream are sprinkled over the top. It is often served with frijoles (refried beans), huevos al gusto (eggs as you like them), and sometimes guacamole, shredded beef, chicken, or a combination of some of the above. In many households, it is served as a brunch dish to use up leftover tortillas or salsa from the meal from the night before. It is a staple dish on menus at breakfast spots and it is also a popular hangover cure. It’s normally a very large portion and Mexicans aren’t generally shy with the cheese and cream, so approach this dish hungrily. 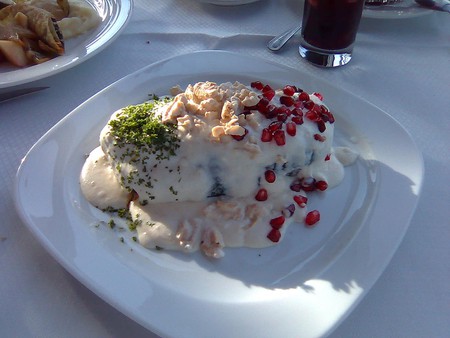 Chiles en nogada is a dish originating from the region of Puebla, in Central Mexico. The name comes from the word for walnut tree, ‘nogal.’ The dish consists of a poblano chili stuffed with picadillo, a mixture of shredded meat, fruits, spices and aromatics. The pepper is then covered with a creamy, walnut sauce called a ‘nogada.’ Finally, pomegranate seeds are sprinkled over the dish. The colors of this dish represent the Mexican flag, the red of the pomegranate seeds, the white of the nogada and the green of the poblano chili, meaning it is a source of both national and regional pride. This dish is traditionally eaten at the end of August and during the month of September (which is when pomegranates are in season in Mexico), and also around the date of Mexican Independence Day (September 16th). This dish is so far removed from what we think of as Mexican food. The usual three core ingredients, corn, beans and chili peppers, are nowhere to be found here, making it a very intriguing and special dish and a must-try for anyone visiting Mexico. 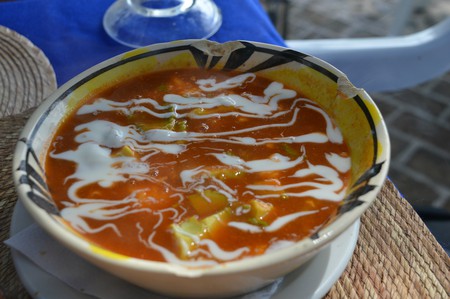 Sopa azteca (also known as sopa de tortilla) is another pre-hispanic dish whose exact origin is unknown, although it is thought to come from the Tlaxcala state. The simple tomato-based soup is topped with fried pieces of tortilla, slices of avocado, cheese, cream, and pieces of pasilla chili pepper, a medium-hot chili which is rich in flavor. In Mexican cooking, the chili peppers do not merely sit on a spectrum from mild to hot, they often bring other flavors to a dish such as sweetness or smokiness. Sopa azteca has simple flavors that contrast each other well. The crunchy pieces of tortilla, alongside fresh, clean avocado, with the tang of the cheese, slight heat of the pasilla and the cooling cream, all brought together by the tomato soup. 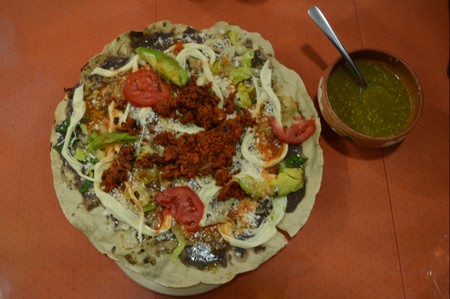 Tlayudas can be found in various cities around Mexico, however, they are generally considered to be the iconic dish of Oaxaca City. They consist of a large wheat tortilla which is normally topped or filled with refried beans, quesillo (stringy cheese from Oaxaca), avocado, tomato, asiento (unrefined pork lard), and a selection of meat, normally tasajo (skirt steak), cecina (pork coated in chili powder) or chorizo. These are either left open or folded and grilled on a barbecue or directly over hot coals. The open tlayudas can be slightly tricky to eat but a little fresher, while the folded tlayudas are more practical and the cheese, when grilled, melts, thereby holding the other ingredients with its stringy grasp. These are a popular fast-food item in Oaxaca, and while they can be found in restaurants, the best place to find them is at a market or on the street where they’ll be packed full and sold cheap. 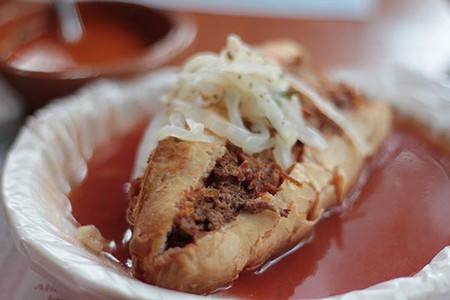 Literally meaning ‘drowned sandwich,’ this dish is a speciality of the state of Jalisco, and is especially popular in its capital, Guadalajara. It is made with a type of bread called birote. Birotes are small white bread rolls with pointed ends, a bit like a squashed baguette. They are crusty on the outside and soft and fluffy inside. To make a torta ahogada, the birote is stuffed with pork meat (although it can be other meats such as chicken or prawns) and the entire sandwich is then smothered in either a mild tomato salsa or a hot chili salsa made from árbol chili peppers (you can normally ask for a bit of both if you like). It comes with slices of fresh lime, often with slices of white onion, and sometimes with avocado. It’s not the most elegant thing to eat, but the partly crusty, partly soggy bread, and the rich flavored salsa surrounding delicious chunks of pork, are well worth covering your face in sauce for. 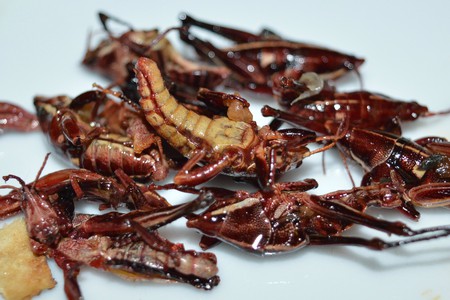 Although these critters might not be everyone’s cup of tea, chapulines (grasshoppers) are a popular snack in the state of Oaxaca. They are toasted and covered in lime and sal de gusano (salt mixed with chili powder and powdered maguey worms). In the central markets in Oaxaca City, vendors sit surrounded by piles of different-sized chapulines. Small ones are often sprinkled on top of guacamole or other dishes. They can be served as an appetizer, cooked a la mexicana, with onion, tomato, garlic and chili, and put in tacos, tlayudas or quesadillas. Chapulines are also eaten alongside mezcal with slices of orange, and they go perfectly with a beer, crunchy, salty, a little spicy, and sharp from the lime. If you can get over the fear of eating insects, these versatile creatures can add a different dimension to many dishes. And if you need more encouragement, they’re high in protein and low in fat, so they’re healthy too. 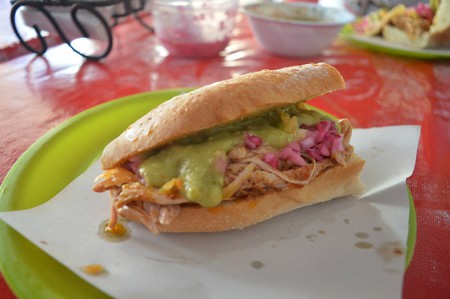 This dish of Mayan origin comes from the Yucatan peninsula to the far east of Mexico, which is made up of the states of the Yucatan, Campeche and Quintana Roo. This dish is a fusion of traditional Mayan cooking techniques and flavors with new ingredients brought over by the Spanish conquistadors, such as pork, citrus fruits and spices. ‘Cochinita’ means suckling pig, and the Mayan word ‘pibil’ means underground, referring to the traditional cooking method which consists of wrapping the pork in banana leaves, putting it in an underground oven, covering it with earth and slow roasting it overnight. The meat itself is marinated in bitter orange juice and seasoned with seeds of the achiote tree (which give it a dark orange color and add nutty and peppery flavors). The result is tender, juicy, flavorful pork. Cochinita pibil can be served in a number of different ways, in sandwiches, tacos, empanadas or enchiladas, to name a few, but it is arguably best served in a simple format, alongside corn tortillas, topped with pickled red onion and habanero chili peppers. 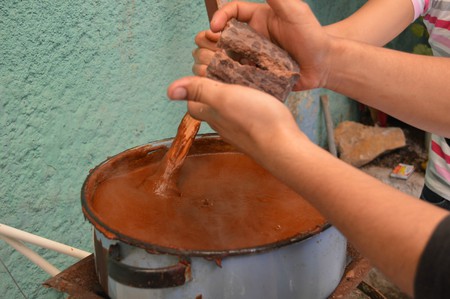 Last but not least is mole. Of all the dishes on this list, mole may be one of the better-known dishes; however, its complexity is hugely underestimated. Mole is, in fact, not one dish, but forms part of many dishes. The name comes from the word for sauce in Nahuatl, an indigenous language, and refers to a number of different sauces in Mexican cuisine. Three states claim to be the original home of mole, Oaxaca, Tlaxaca and Puebla. In Oaxaca alone, there are seven different varieties of mole. The most famous is the mole negro, often served with chicken, and made of an impressive list of ingredients, including various nuts, seeds, spices, chilies, a banana and chocolate. The sauce takes at least a day to prepare, and it is therefore eaten predominantly on special occasions. Mole poblano (also known as mole rojo) is similar to mole negro but uses less chocolate and more chili, making it more fiery. This is also the mole that is most often seen outside of Mexico. Another type, mole verde (green mole), however, is very different. It is much fresher, living up to its name, using fresh herbs and pumpkin seeds. Mole encompasses a wide range of different flavors and dishes, and cannot be understood simply by tasting one or two of its varieties.