10 Important Mexican Saints That You Should Know 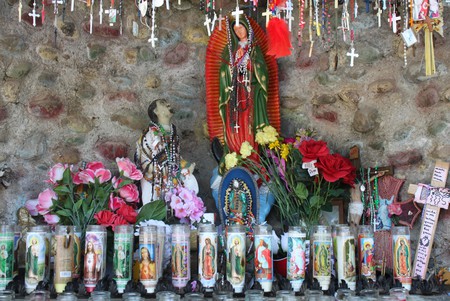 Misfits, miracle workers, and martyrs make up a pantheon of saints dear to the hearts of everyday Mexicans. Some saints are followed with the approval of the official Catholic Church, some ride a hazy line between folk hero and delinquent, and some simply represent the everday needs and dreams of a nation rich in religious syncretism.

By far Mexico’s most venerated saint, the Virgin of Guadalupe (the Virgin Mary) appeared to the peasant farmer Juan Diego and directed him to tell the archbishop to build her a temple in what is now the north of Mexico City. But this virgin was unusual, with dark skin and a crescent moon at her feet, an important symbol in the Aztec religion. She even spoke the native indigenous language. For centuries her appearance was not officially recognized by the Catholic Church but they eventually gave in under the pressure of her millions of devotees. On October 12, 1945, Pope Pius XII, decreed Our Lady of Guadalupe to be “Patroness of all the Americas.” 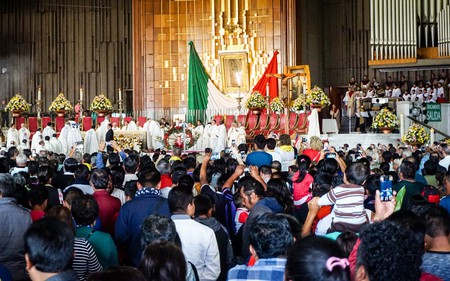 A simple peasant farmer, Juan Diego had to make several trips to the archbishop in order to finally prove he had recieved a divine message from the Virgin. In his final attempt to convince the local clergy, the virgin asked him to gather into his cloak the Castillian roses that were suddenly growing on the hill where she appeared to him. As the roses spilled from his cloak in front of the archbishop, an image of the Virgin appeared on the fabric. That cloak is still intact in the Basílica de Santa María de Guadalupe in Mexico City. Juan Diego was canoninized in 2002 and became the first Roman Catholic indigenous saint of the Americas.

St. James is the patron saint of Spain and his veneration in Mexico began with the Spanish colonizers. From that time forward his cult in Mexico has only grown stronger. Many towns and villages are named for him and his feast day, July 25th, is celebrated throughout the country with the Dance of the Tastoanes, a reenactment of native Mexicans fighting Spanish Conquistadors. He is typically considered to be the first apostle of Jesus martyered for his faith.

Each month at the Hipolito church in downtown Mexico, crowds gather for masses dedicated to St. Jude, who has been adopted as the patron saint of Mexico’s City’s underbelly and down-and-outs. St. Jude is said to help with money problems and therefore is especially venerated by the city’s poorest residents. He with his ever present staff, is considered to be a tough protector of even theives and hustlers. 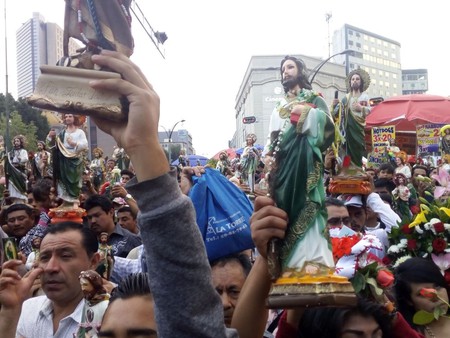 Members of Mexico’s large Lebanese community often venerate St. Charbel, a Lebanese monk and hermit who was canonized by the Catholic Church in 1965. He lived the majority of his life as a hermit and monk, and the miracle that brought him sainthood was that for several decades his corpse appeared not to decompose but to remain flexible as if his blood was still flowing in it. His devotees pray to him to intercede on the behalf of sick loved ones and a temple is dedicated to him in one of Mexico City’s Centro Historico.

The death cult is extremely strong in Mexico, and nowhere more than Mexico City. Santa Muerte isn’t the grim reaper, but a saint who can be prayed to for all manner of woes and worries. Santa Muerte may be portrayed as a man, but is most often a woman and statues of her generally hold an important place in a family’s home. While not officially recognized by the Catholic Church, the cult of Santa Muerte has not declined since the 1990s when her cult boomed in popularity. 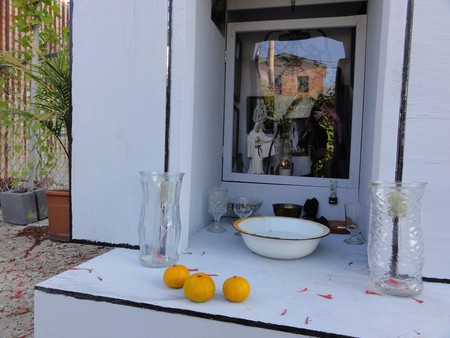 Romo was one of the martyrs of the Cristero War that the Mexican government under President Plutarco Elías Calles waged against the Catholic church. He is the patron saint of immigrants as he is said to have appeared to a man lost in the desert, trying to find his way across the border, and kept him from dying of hunger. He then told the man that when he had found work and was safe he should look for him in Santa Ana de Guadalupe, the saint’s hometown in the Jalisco, Mexico. When the lost man described the apparition, followers were convinced it was Romo.

Jesús Juárez Mazo, venerated as Jesús Malverde, is the patron saint of Mexico’s narcos (drug smugglers) even though his original story has nothing to do with drug trafficking. He was born in 1870 in Sinaloa and is said to have been a kind of Mexican Robin Hood, robbing the rich to give to the poor. He was said to have been executed in 1909 and the first altar dedicated to him was constructed in Culiacán in 1969. Since then he has become the saint of thieves and criminals, who pray to him to intercede on their behalf with the big guy. 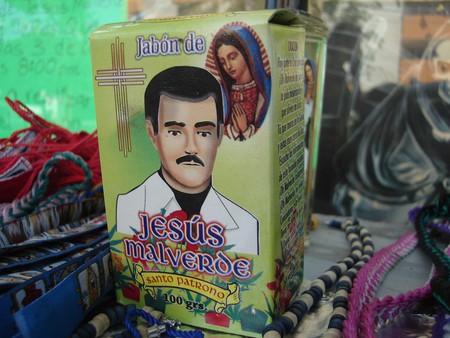 Juan Castillo Morales was a young soldier in Tijuana that was falsely accused of killing a small boy, the legend says. There are those who say miracles have occurred near his gravesite, but other followers simply adore him as an innocent man killed for a crime he didn’t commit. In Tijuana he’s known as the “el santo violador” and as with all of the saints on this list, tiny chapels and niches are dedicated to him throughout the country, especially along the U.S./Mexico border

The Fidencio boy, called as such because it’s said he never developed to maturity and had a soft, high voice his whole life, was a famous Mexican healer who also participated in the Mexican Revolution movement. While never officially recognized by the Catholic church, his followers, mostly in northern Mexico and Southwestern United States, pray to him for the healing of themselves and loved ones.