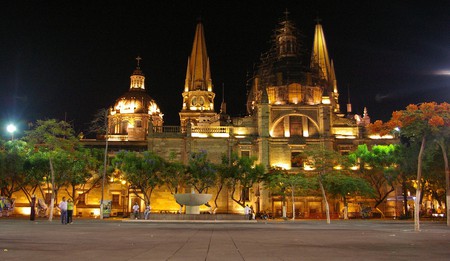 The first director, producer and distributor of Mexican cinema, Salvador Toscano Barragán, was born in Guadalajara on March 22, 1872, and the medium has had a strong relationship with the city ever since. Guadalajara has been the backdrop of many movies and telenovelas, Mexican soap operas, but here some of our top picks.

Many believe that the migration of Mexican workers to the U.S. is a recent phenomenon, but Guadalajara Pues proves otherwise. The film begins with an American couple who visits Guadalajara with their former employee and chronicles a group of men known as the braseros, who went to work in the U.S. after WWII. Of course, there are many rancheras, Mexican folk songs, and tequila canteens.

If you want to see the city in the ’60s, when the first skyscrapers were built and the population reached its first million, this is the film for you. Guadalajara en verano begins when a group of American tourists arrive in the city for vacation, and then the adventure begins. Of course, there is a lot of music and charros.

In the ’80s, Mexican cinema had its worst times. The movies were low budget, and the plots were mostly about drug dealing, brothels and guns. Still, there were some good plots that showed a specific time in Mexico’s history.

Based on a true story, Los insolitos peces gatos, which translates to The Amazing Catfish, is set in 2003 and tells the story of Claudia, who befriends a lady she meets in a hospital. Claudia eventually becomes an integral part of the woman’s family. The film scored a few awards for the acclaimed director, Claudia Sainte-Luce.

With the amazing acting of Damián Alcázar, this black comedy brings attention to the tragic reality of the thousands of missing people in Mexico with a story told through the eyes of the very strange protagonists as they travel around Guadalajara.

Recorded at the emblematic Teatro Degollado, the most important place for arts in Guadalajara, this Netflix Original is a one-hour stand up special with Sofia Niño de Rivera, one of the most well-known Mexican comedians.

This Mexican soap opera received funding from the state government in an effort to promote Guadalajara and Jalisco as tourist destinations. The show features Jacqueline Bracamontes, who was born in Guadalajara and is a well-known actress and model.

Directed by famed Mexican director Jaime Humberto Hermosillo, this film uses Guadalajara as the backdrop and tells the story of a doctor, Rodolfo, who has a love affair with a young music student, Ramón. Mexican folk singer Lucha Villa has a cameo performance.

In this film, Diego Luna, now one of the biggest Mexican actors, plays a teenager of 13 who lives in a fantasy world and plans to follow his dream girl to Guadalajara.

More similar to a musical video, this movie features the very well-known singer Cornelio Reyna and actress Verónica Castro. Originally made to promote the state of Jalisco, the story is about a man who became famous as a singer (Reyna) but never forgets his first love (Castro).