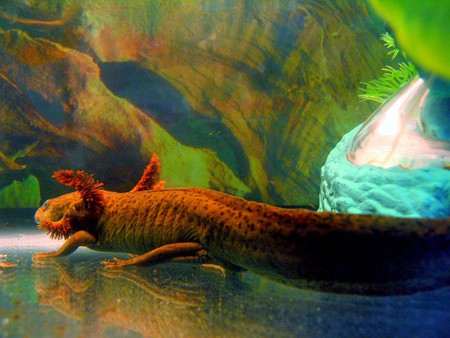 The iconic Mexican salamander, or axolotl, may look like a Pixar Studios creation, but it is actually one of the most scientifically studied amphibians in the world. Known colloquially as a “Mexican Walking Fish,” the axolotl (pronounced ACK-suh-LAH-tuhl) can reach up to a foot in length and survive up to 15 years in the wild. The species is now facing extinction and the preservation of wild axolotl has become a major concern for Mexican conservationists. Here are 10 surprising facts about these incredible creatures.

Axolotls are the oddballs of the amphibian world and become adults without undergoing metamorphosis. Instead of using their lungs and heading to dry land, axolotls spend their entire lives underwater. 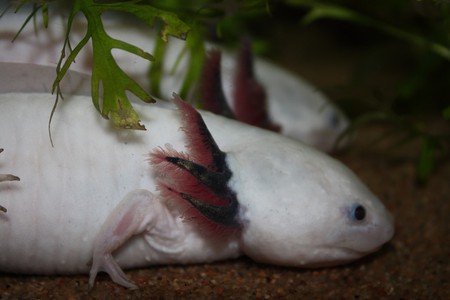 The strange-looking creatures have external gills—the brightly colored whiskers that poke out from their heads. These gills are used to absorb oxygen and often flare up when the axolotl feels threatened.

They also have lungs

As if undecided whether to live in the sea or on land, axolotls also have a pair of lungs, just in case. Although they usually remain undeveloped, these lungs grow if the axolotl is placed in shallow water. In extremely rare cases, such as when their habitat dries up, an axolotl will emerge from the water to become a fully-adult Mexican salamander. 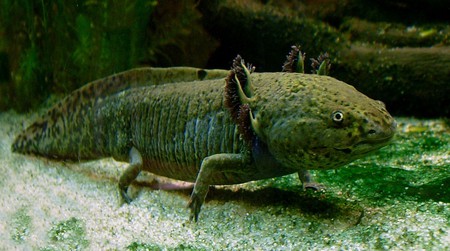 They have a bizarre mating ritual

True to eccentric form, axolotl have pretty freaky mating habits. Males deposit sperm mounts onto rocks and plants before repeatedly pushing the female in an effort to guide her onto the sperm. Definitely not the most romantic of sights.

Wild axolotl only live in one place

Captive axolotl have become popular exotic pets, but wild ones are found exclusively in the lake complex of Xochimilco, the network of rivers and small lakes that has become one of Mexico City’s most popular destinations. As the ancient neighborhood has expanded, the waters have grown contaminated and the axolotl is now considered a critically endangered species.

They have an amazing ability to regenerate

While many amphibians can regenerate body parts, axolotls have a unique ability to regrow limbs completely seamlessly. No matter how many times axolotls lose an arm or a leg, they can regenerate it without scarring. What’s more, the amphibians can also regrow their tail, spinal cord, or even parts of their brain.

They are ultra-resistant to cancer

If their regeneration powers weren’t enough, scientists have also discovered that the axolotl is more than 1,000 times more resistant to cancer than any other animal. The creature is being studied extensively in the hope that medical researchers can find a breakthrough in the fight against cancer in humans.

Incredibly, researchers have found that if they amputate one axolotl’s limb and place it on another axolotl it will easily attach and become a working part of their body. Even more surprising, when they transplanted damaged organs from another animal into a healthy axolotl, the organ healed and began to work properly.

In one ethically questionable study published in 1968, researchers transplanted axolotl heads onto the backs of other axolotl. The new heads reacted in a normal manner, behaving in a way that was independent of the host animals. One axolotl even lived for 65 weeks with a transplanted head on its back.

The Aztecs had great respect for the axolotl’s power

The Aztecs were fascinated by the amphibian’s regenerative powers and believed that the very first axolotl was a god who had changed form to avoid being sacrificed. Far from the image of the cute little creature that we have today, the Aztecs venerated the amphibian as a manifestation of Xólotl, a terrifyingly powerful dog deity who ferried the dead to the underworld. 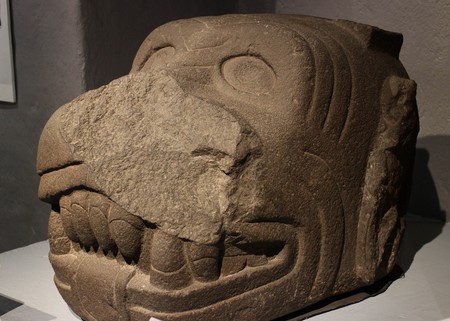 Even the great Argentine novelist Julio Cortázar featured the axolotl in his work. His celebrated short story “Axolotl” concerns a man who comes to identify powerfully with the creatures after seeing them in a Parisian botanical garden. The story opens with the memorable line: “There was a time when I thought a great deal about the axolotls. I went to see them in the aquarium at the Jardin des Plantes and stayed for hours watching them, observing their immobility, their faint movements. Now I am an axolotl.”