These Blob Creatures in Vancouver's Lost Lagoon Are Freaking Out Locals 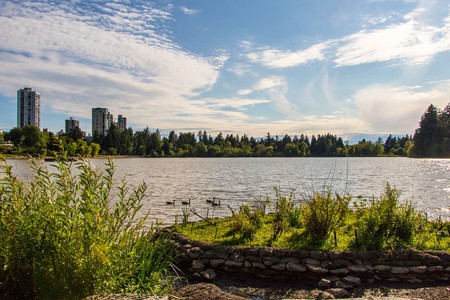 Lost Lagoon is an artificial lake located at the entrance to Stanley Park, one of Vancouver’s most popular attractions. Locals who walk, bike, and run past the lake daily were surprised when a recent BioBlitz in Stanley Park revealed blob-like creatures within the lake. Keep reading to find out just what these mysterious beings are.

What is the blob?

The blobs are, in fact, a colony of animals called a bryozoan, or pectinatella magnifica. The conservation programs manager at the Stanley Park Ecology Society (SPES), Maria Egerton, said the bryozoans live in colonies that include thousands of genetically cloned individuals. When they come together, they can reach the size of a football, and as Atlas Obscura humorously notes, they look “something like a swamp creature’s brain.”

The individuals are called zooids and are tiny invertebrate animals that are cylindrical in shape with a mouth, muscles, nerve center, and digestive tract. Individually, they measure less than a millimeter in length. The SPES says that “as a colony forms, they produce a protein which creates the slimy gelatinous structure that the individual zooids attach to and live on.” Indeed, the bryozoan has a viscous quality, “like week-old Jell-O,” Celina Starnes of the SPES told CBC News.

The bryozoans were discovered during the annual Stanley Park BioBlitz. The SPES believe the blobs have existed for quite some time, but thanks to rising temperatures and decreasing water levels, the blobs have recently become more visible within the Lost Lagoon. Most bryozoan species live in saltwater, but there are approximately 20 freshwater species. In Canada, people have seen bryozoans in central British Columbia (around the Okanagan Valley) and eastern Canada.

How to see it for yourself

The SPES thinks that “the discovery of multiple colonies of freshwater bryozoans is exciting.” The only concern is that if the number of bryozoans continues to grow substantially, it won’t be beneficial to the lagoon environment, and they can clog pipes. If locals want to see the blobs for themselves, the SPES suggests visiting the Lost Lagoon and peering into the water near the lake’s biofiltration pond. It lies only meters from the Stanley Park Causeway. The SPES says the blobs in the Lost Lagoon range in size from a peach to a football. There are also people working at the Stanley Park Nature House who can answer any questions you might have on bryozoans.