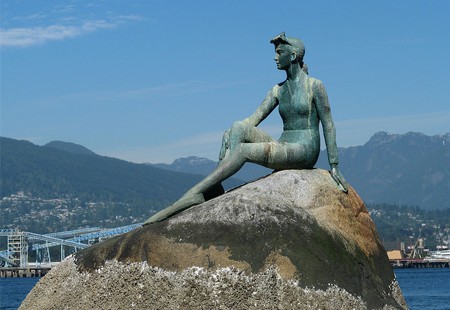 Girl in a Wetsuit | © Bobanny / WikiCommons

The Little Mermaid sculpture in Copenhagen is one of the city’s biggest tourist attractions and symbols. But further offshore in Vancouver, opposite Stanley Park, is a similar sculpture. Here is everything you need to know about the infamous Girl in a Wetsuit.

The story behind The Little Mermaid

Commissioned by Carl Jacobsen of Carlsberg Lager, and created by Edvard Eriksen in 1913, The Little Mermaid is a bronze statue located on the Langelinie Promenade in Copenhagen. It is based on Hans Christian Andersen’s fairytale of the same name.

The statue’s head was modeled after local ballerina Ellen Price, while Eriksen’s wife, Eline, posed for the body. Since the 1960s, The Little Mermaid has been a target of vandalism numerous times but continues to be restored. Vandals have decapitated the statue twice, removed an arm, covered it in every color of paint, and even blew it off its rock. 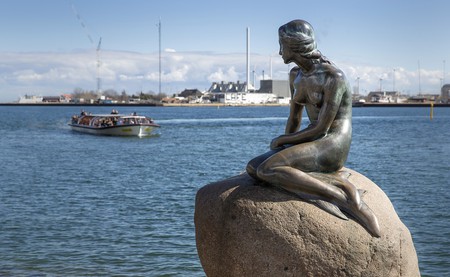 The Little Mermaid is under copyright until 2029, which will be 70 years after Eriksen’s death in 1959. In Greenville, Michigan, they installed a replica in 2004 to celebrate the town’s Danish heritage. Although it had many distinguishing characteristics, the Artists Rights Society sued Greenville in 2009, but they reportedly dropped the claim soon after.

There are also similarities between The Little Mermaid and the Pania of the Reef statue in Napier, New Zealand, and when Vancouver was unable to obtain permission to reproduce The Little Mermaid, they created their own modern version, the Girl in a Wetsuit. 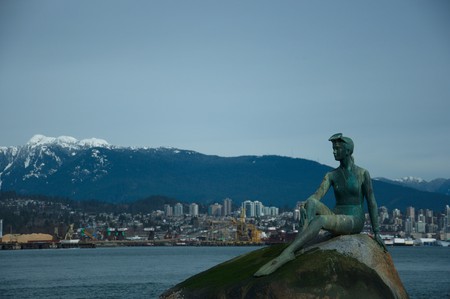 The Girl in a Wetsuit

The Girl in a Wetsuit, created by Elek Imredy in 1972, is a bronze statue that sits on a rock in Stanley Park’s north side. Inspired by The Little Mermaid, Douglas Brown, a Vancouver lawyer, approached Imredy to do the work. Imredy’s friend, Debra Harrington posed for the sculpture, which depicts a woman in a wetsuit, complete with flippers and a snorkeling mask on her forehead. The Girl in a Wetsuit is an updated and less-revealing version of The Little Mermaid, which allowed Vancouver to avoid copyright issues and make the statue unique to the city.

Imredy said that, at the time, scuba diving was becoming popular in Vancouver. He believed the statue to be a new idea, and he thought the great controversy surrounding it was surprising. Following his death, his wife said that the Girl in a Wetsuit “represents Vancouver’s dependence on the sea, and the necessity to use the sea for the benefit of all.”