18 Photos That Prove You Really Must Visit Vancouver at Night 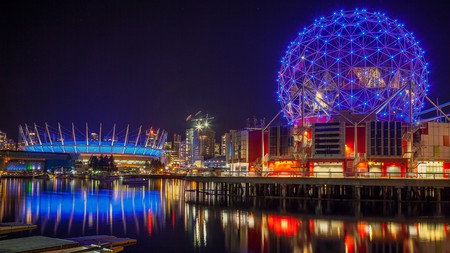 Vancouver is a photogenic city both day and night, as it’s filled with spectacular scenery. Its perfect combination of being an urban city surrounded by nature means it truly is a beautiful sight to see. From its mountaintops to its parks to its inner neighborhoods, here are some of the best views you can witness if you visit Vancouver at night.

Directly across the water from downtown Vancouver is North Vancouver. From here, you can see Vancouver’s skyline in its entirety. Skylines always look better lit up at night.

Get a glimpse of Vancouver’s West End neighborhood and Robson Street from Cloud 9. The revolving restaurant and lounge is on top of the Empire Landmark Hotel. 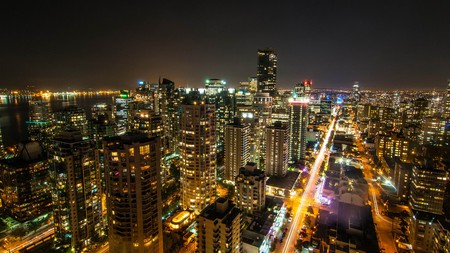 Although Vancouver doesn’t get as much snow as other Canadian cities, it does look good as an urban winter wonderland. This photo is from Stanley Park, looking towards Coal Harbour and downtown Vancouver. 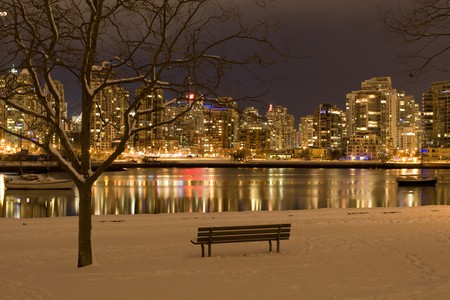 From this Gastown viewpoint, many Vancouver landmarks are visible. In the background is the Lion’s Gate Bridge, and then there’s Stanley Park, Canada Place, and Vancouver Lookout. 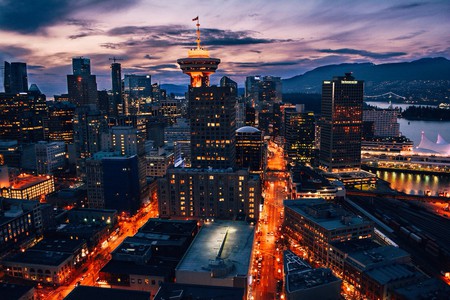 Coal Harbour is a Vancouver neighborhood just outside the main downtown area. It’s known for its perfect waterfront location, closeness to Stanley Park, and a plethora of apartment buildings. 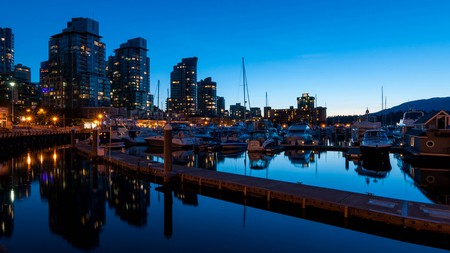 In the opposite direction of North Vancouver, Queen Elizabeth Park also offers excellent views of the Vancouver skyline. From this urban park, the city is perfectly backdropped by one of its biggest drawing cards: its snowy mountains. 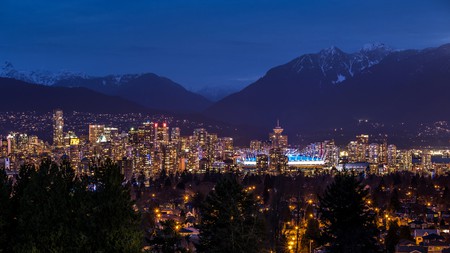 The Seawall is the world’s longest uninterrupted waterfront path, at 28 kilometers (17 miles) long. From the Olympic Village section, the area literally glows thanks to Science World’s dome and BC Place, a local sports stadium.

Although the best photos of Vancouver at night usually include Vancouver Lookout as part of the skyline, the views from the Lookout itself are worth seeing. 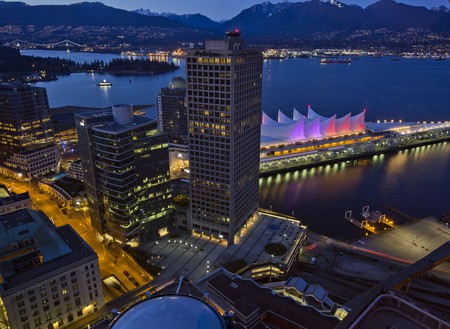 Granville Island is a popular tourist destination in Vancouver that fortunately lives up to the hype. Located between two bridges and surrounded by marinas, it’s a beautiful place to visit at night. 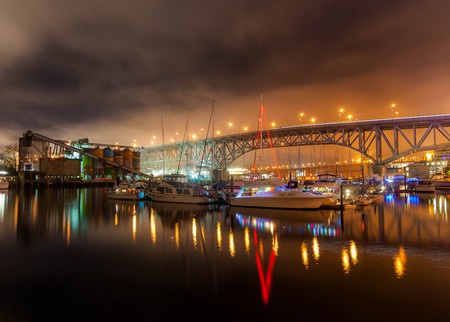 Hotel Europe, or Vancouver’s version of New York City’s Flatiron, is a city landmark located in Gastown. Surrounded by the neighborhood’s historic lamps, it definitely looks European at night. 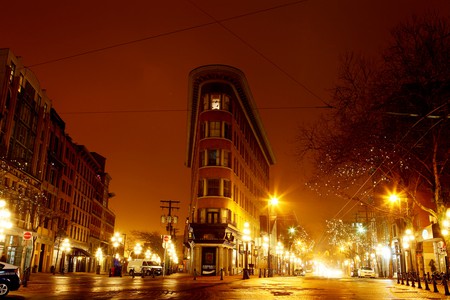 The Celebration of Lights Festival, which happens every summer, is the longest-running offshore fireworks competition in the world. It truly lights up Vancouver. 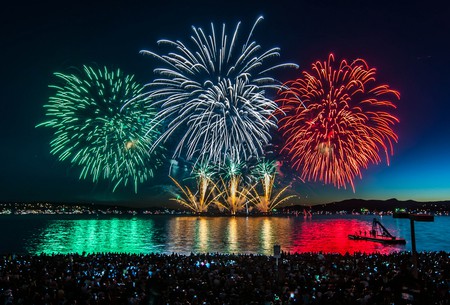 Directly in front of Jack Poole Plaza is North Vancouver and its mountains. Turn in the other direction to see the Olympic Cauldron and just a few of Vancouver’s many apartment buildings. 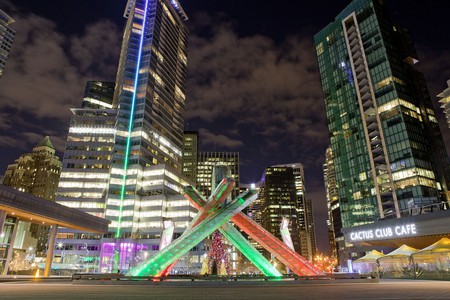 From West Vancouver—an area known for its expensive houses with ocean views—the entire downtown Vancouver area is visible. From this viewpoint, in particular, you can see Stanley Park, the Lion’s Gate Bridge, and the skyline. 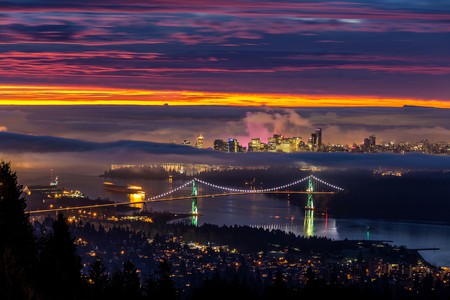 Although walking down city alleys alone at night isn’t the best idea, some of them do offer different angles of Vancouver Lookout—the crown in Vancouver’s skyline. A local favorite is a bright pink and yellow alley just off Granville Street near Pender Street. 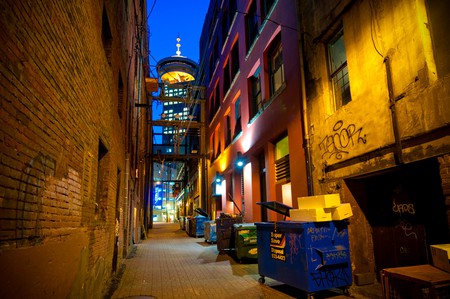 Looking up in a downtown alley | © Kenny Louie / Flickr

Gastown is one neighborhood in Vancouver that definitely looks better at night, thanks to the historic lamps lining Water Street and the trees adorned with fairy lights year-round. 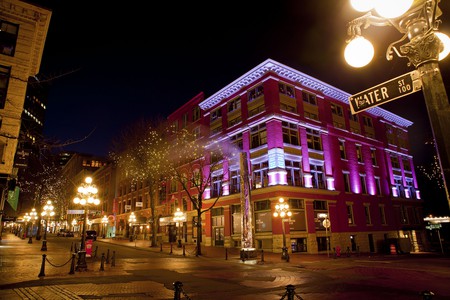 Cypress Mountain, Mount Seymour, and Grouse Mountain are the three main mountains close to Vancouver. As they’re located in West and North Vancouver, from the top, you can see Vancouver stretched out in front of you. Grouse is open in both summer and winter; therefore, this view can be captured no matter the season. 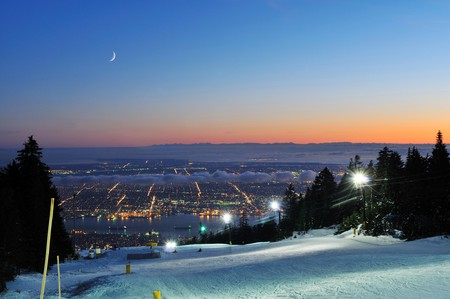 This Keith Richards artwork was photographed down a lane off Vancouver’s Commercial Drive neighborhood, which is a great place to spend an evening in the city. 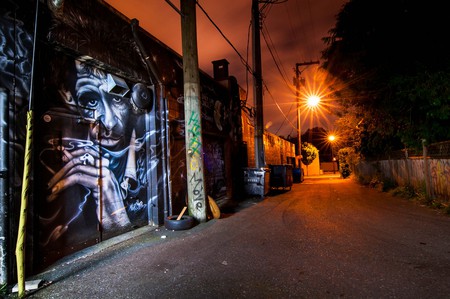 Stanley Park may be more exciting to visit in the day, but the views from the Seawall towards Coal Harbour and the city are clearly better in the evening. 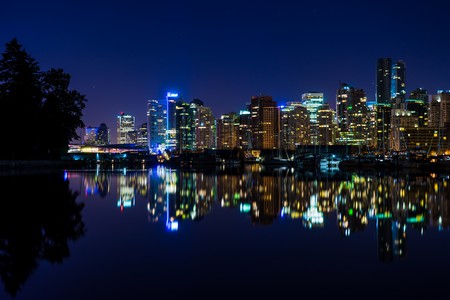