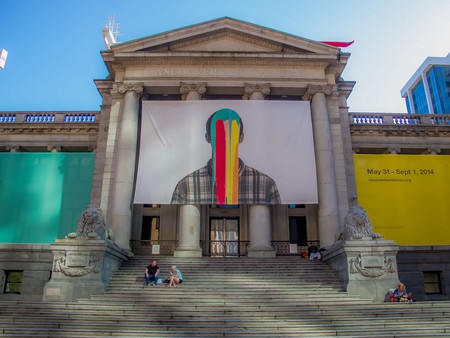 Vancouver has been home to some amazing artists, like Emily Carr, whose design school is one of the best in Canada. Read on to find out more about Vancouver’s emerging contemporary artists and their specialties.

Drew Young is a native of Vancouver Island, and attended both The Victoria College of Art and Capilano University. He now teaches Commercial Illustration at Langara College. Drew has an unique style and his portfolio includes many designs featuring people, in both ordinary and extraordinary circumstances. He’s making quite a name of himself in Vancouver, as he directed the inaugural Vancouver Mural Festival in 2016 and curates for TEDX Vancouver.

Born in Turkey, Derya Akay is now based in Vancouver, after graduating from Emily Carr University of Art + Design in 2010. He was shortlisted for the 2015 RBC Emerging Artist People’s Choice Award. His exhibitions involve many different elements and materials, including paintings, ceramics and textiles. A local gallery says Derya “approaches everyday objects, materials and experiences as rich sites of knowledge and meaning”.

Rebecca Chaperon says her artwork “act as a means of storytelling, as landscapes meet flat geometry and emotive undercurrents”, and that her process usually begins with the idea of place. For example, her exhibition Antarticus was an amalgamation of two places: Mauritius and Antarctica. In 2014, Rebecca released a picture book of her artwork, called Eerie Dearies.

A contemporary abstract artist, Deb Chaney creates a new body of work every year, to exhibit and then sell to both private and corporate collectors. Deb says her paintings are the “fragments of my life”. She begins with a large white sheet of watercolour paper, a palette knife, some heavy body acrylic paint and the “compelling need to create”. Deb admits that paintings can be a culmination of 20 to 30 layers added and subtracted, which can take between a week to several months to complete.

Big paintings in process today. Drying in the Sun outside my studio. A few more layers to go….

Andy Dixon is a former Canadian punk singer, who is now a self-taught contemporary artist. He’s becoming well-known for his bright paintings, which use an eclectic mix of colour. Andy likes to use luxurious and valuable subject matter in his acrylic artwork, such as stately portraits, ornate ballrooms and vases. The Vancouver Sun says that apart from the outrageous hues and coarsely applied paint, “his warped appropriations invite the viewer to invent a new understanding of the subjects”.

Kelly Crawford draws on her beautiful British Columbia surroundings to create vivid landscape paintings. In her paintings, she focuses on the forms and colours of the outdoors, and explores the play between light and shadow, which differs in every season. Kelly’s paintings are predominantly oil on canvas. People have said her work seems to draw inspiration from the famous Canadian landscape painters, called The Group of Seven.

Ola Volo is a Kazakhstani illustrator and artist based in Vancouver. She has a very distinct style, which is drawn from “history, multiculturalism and folklore”. Olo’s “intricate works bring animals, people, architecture and nature together to articulate diverse stories rich with symbolism and elaborate forms”. Olo has worked for local clients such as HootSuite, Vancouver Opera and lululemon. Her murals can be found around town, in places such as Industrial Avenue.

Justine Andrew has spent many years “fine-tuning her intentionally undefined style”. The vibrancy and boldness of artists like Andy Warhol definitely influenced her earlier works. Since then, Justine has developed her own personal abstract artistic style, with the use of “subtleties, vibrancies, and playing with light and shadow”. Her preferred medium for her colourful paintings is latex acrylic on wood.

A recent graduate from Emily Carr, with a Bachelor of Industrial Design, Andrew Tavukciyan is already going places with his artwork. His clients so far have included Car2GO, Telus and the City of Vancouver. His bold sketches and abstract artwork are predominantly black and white, with colourful backgrounds and intricate patterns. He told Rise that he feels a necessity to create. He has described his work as “Formulaic, impulsive and abstractions”.

Mega McGrath labels herself as a multidisciplinary artist and designer. Her main discipline is text art, but she also focuses on calligraphy, typeface design and lettering. Mega’s work has not only featured on walls, but also clothing, shoes and calendars. She is the founder of street art project, Street Script, which she calls an intersection of art and hip hop. Around Vancouver, her work can be found in places like Alexander Gastown and Fortune Sound Club.

Me doing me things / Process from the mahsiv @antisocialsolutions install a few weeks back. Photo by @wardor 🐬