What’s the Story Behind Montreal’s Biosphere? 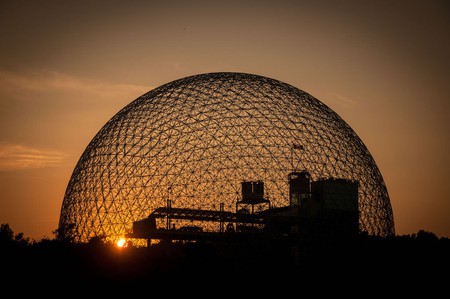 In its current iteration, the Montreal Biosphere is a popular museum dedicated to the environment. Visitors come to the distinctive dome to learn about air, water, biodiversity, climate change, sustainable development, and more. What visitors and locals alike might not be aware of is the history of the Biosphere and how it came to be constructed in the heart of Montreal.

Designed by noted American architect, author, and inventor Buckminster Fuller (July 12, 1895 – July 1, 1983), the Biosphere stands in Parc Jean-Drapeau. The “geodesic dome” structure, a design popularized by Fuller, was commissioned by the United States government as the country’s contribution to the 1967 World Fair Exposition (Expo 67) in Montreal, to function as America’s pavilion for the event. 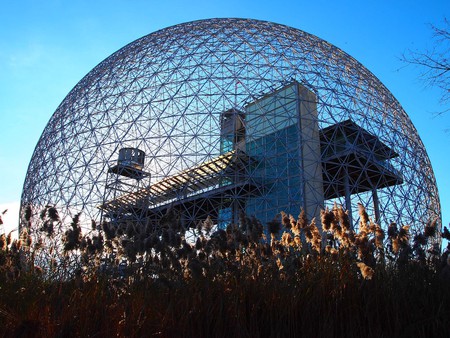 The dome, constructed with a steel skeleton frame and an acrylic covering, is a 20-story two-thirds sphere that exhibited American cultural contributions such as spaceships from the Apollo missions and artwork from around the country. At Expo 67, around 5.6 million attendees marveled at the sphere’s immense, jewel-like design.

Originally, the intention was to dismantle the dome after Expo 67, but due to budget limitations, the dome’s structure was secured and remained—becoming a key feature of Montreal’s cityscape. For the following nine years, the sphere remained open to the public. 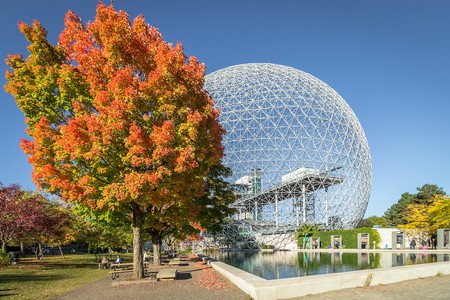 In 1976, however, there was a maintenance-related accident that caused the acrylic covering of the sphere to catch on fire, encasing it in wild flames for around half an hour. When the blaze was finally doused, the acrylic frame had entirely disappeared—leaving behind just the sphere’s steel frame. After that, it was closed for 15 years. 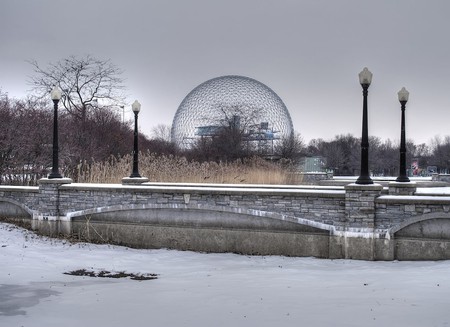 The sphere reopened in 1995, and it had a new purpose: it was now a museum dedicated to environmental action. But just three years later, in 1998, the Biosphere faced another disaster when Montreal—and the entire region—was hit with a severe ice storm. Due to damages, the Biosphere was forced to close for five months.

In 2007, the mission of the Biosphere expanded into being a more broadly themed environmental museum, with various exhibits and interactive features for visitors to explore different issues connected to ecosystems and sustainability. It continues to illuminate the city’s horizon with dazzling, colorful displays of light.