The Most Beautiful Streets in Quebec City, Canada 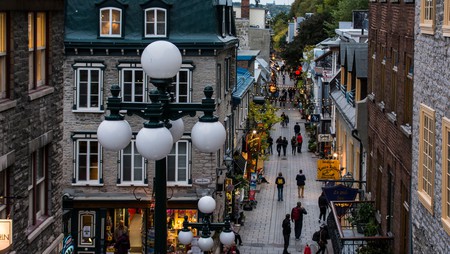 In Old Quebec, every street has a story that sheds light on the cultural, military and artistic history of the provincial capital. Many routes reveal scenic views of the city’s historical architecture, especially the Château Frontenac and its natural setting along the St Lawrence River. Get your camera ready, because these are the most beautiful streets you’ll find in Quebec City. 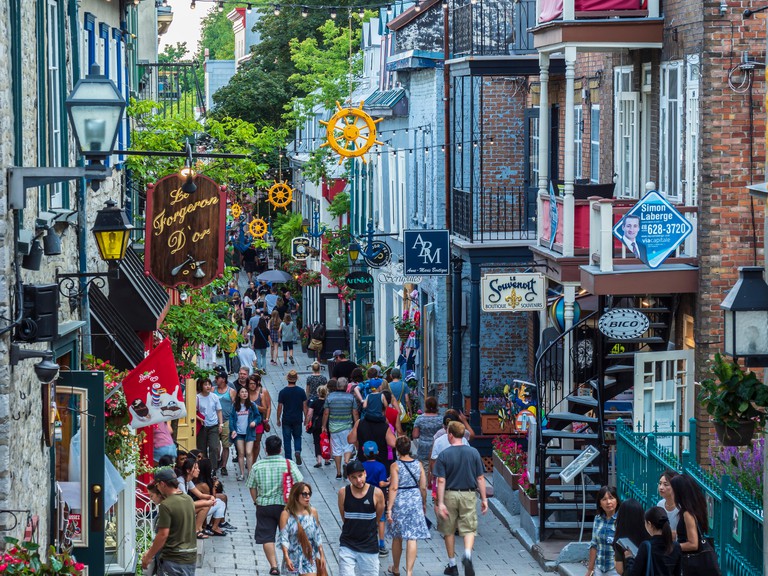 © Dan Leeth / Alamy Stock Photo
Set at the foot of a cliff just below the impressive hotel Château Frontenac, Rue du Petit‑Champlain is one of the most photographed streets in Quebec City. This narrow, cobblestoned route is lined with quaint shops and boutiques, making it a charming place to shop in all seasons. The street also offers a dramatic view from the top of the famously steep Escalier Casse‑Cou (or Breakneck Staircase), the oldest stairway in the city.

Dating from the historical period of New France, Rue Sous-le-Cap runs along the Cap Diamant cliff. The upper-floor walkways between the stone buildings make this street stand out, and you’ll feel as though you’ve stepped back through time and into another era. 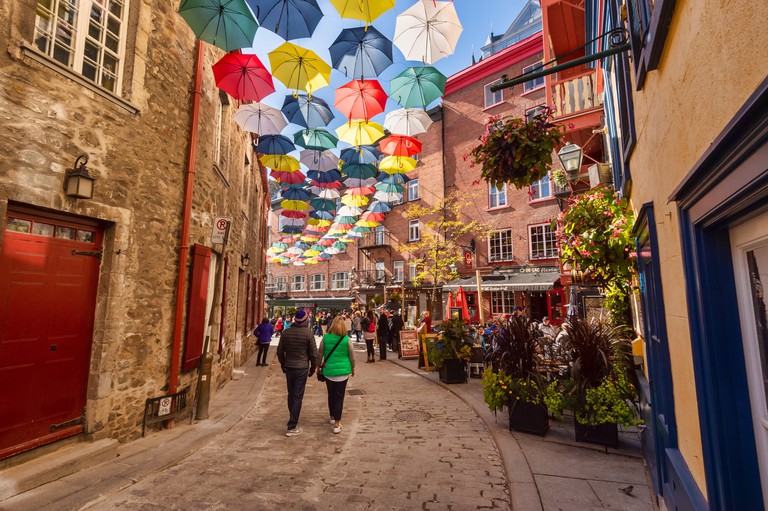 You’ll be charmed when you stumble across this little street in Old Quebec. The stone buildings lining the way are rounded, and the street is strung with enchanting decorations during the summer. Look up, and you can spot the majestic Château Frontenac on the nearby cliff. From the corner of Rue Cul-de-Sac and Rue Notre-Dame, you can take photos that capture the distinct architectural styles of both Rue Petit-Champlain and the Château Frontenac.

Rue des Remparts is characterized by elegant historic homes on one side and the walls of the fortified Old City on the other. This is a great route to meander along and take in the scenic views of the Lower Town, the St Lawrence River and the Laurentian Mountains. A few cannons stationed along the street reflect the military history of Quebec, and you can just glimpse the house of General Montcalm, commander of the French army during the infamous Battle of the Plains of Abraham, which led to the downfall of New France and marked the beginning of British colonial rule in the region. A number of other charming residential streets can be accessed from Rue des Remparts, so be sure to keep exploring. 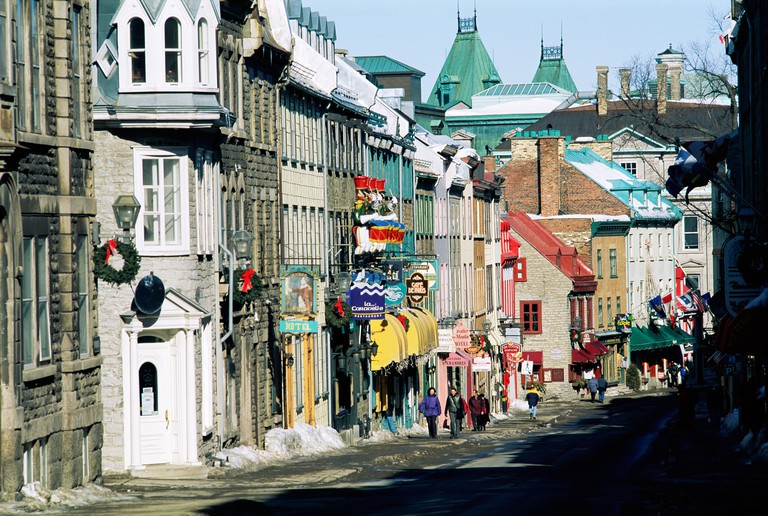 Rue Saint-Louis is considered to be one of the oldest streets in Quebec City, dating back to the 17th century. There are a number of historic structures along this street, including Saint-Louis Gate and the Ursuline convent and museum (which preserves the heritage of the first French teachers for girls in North America). At the corner of Rue Desjardins and Rue Saint-Louis, you’ll also find Maison Jacquet, the oldest building in the city, built between 1675 and 1676. Across the street is the Museum of Inuit Art. Additionally, Adolphe-Basile Routhier, who among other works composed the lyrics of the Canadian national anthem, lived at 85 Rue Saint-Louis. Keep an eye out for a large elm tree along the way, where a cannonball has been lodged since at least the 1900s. This is actually an old (deactivated) bomb, and its presence among the roots is something of a mystery. One theory is that the bomb was among those fired into the city by the British artillery in 1759.

Walking along Rue Donnacona, you’ll be sure to notice the cute, unusually small house at No. 6. At just over 12ft (nearly 4m), this is the smallest façade in North America. From there, you can snap a few photos at the picturesque covered entrance to the École des Ursulines. If you then turn onto Rue du Parloir, you’ll come across a charming series of homes with distinctive red doors. 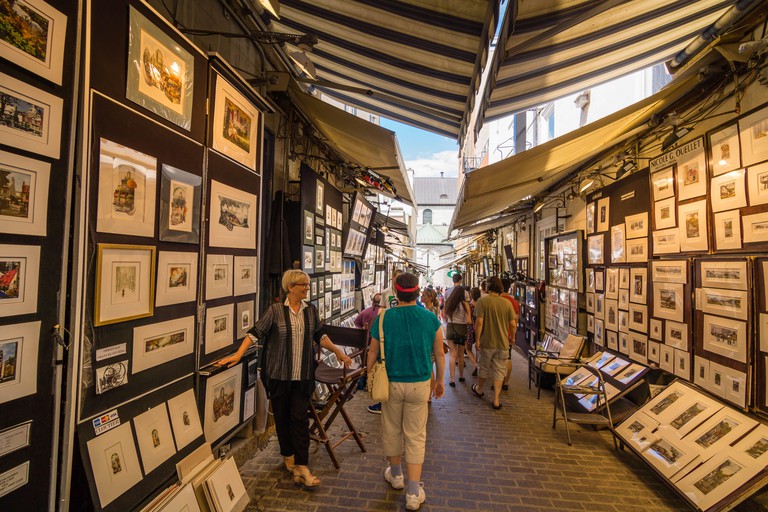 © James Dugan / Alamy Stock Photo
Rue du Trésor is a popular stop for any wanderer through Old Quebec. This narrow street is actually an alley, and in the summer and autumn months, it looks more like an art gallery as local artists and artisans set up their pieces and prints along the walls. If you’re an art lover, you can explore local talent, purchase sketches of Quebec City’s most iconic scenes, or get your caricatures drawn beneath the awnings.

Côte du Colonel Dambourgès is a paved, walled route that gently slopes and curves along the way. This street connects the Old Port to Côte de la Canoterie, which in turn runs from the Lower Town to the Upper Town. As with many streets in Quebec City, you might find yourself wondering whether you’ve stepped into another era. 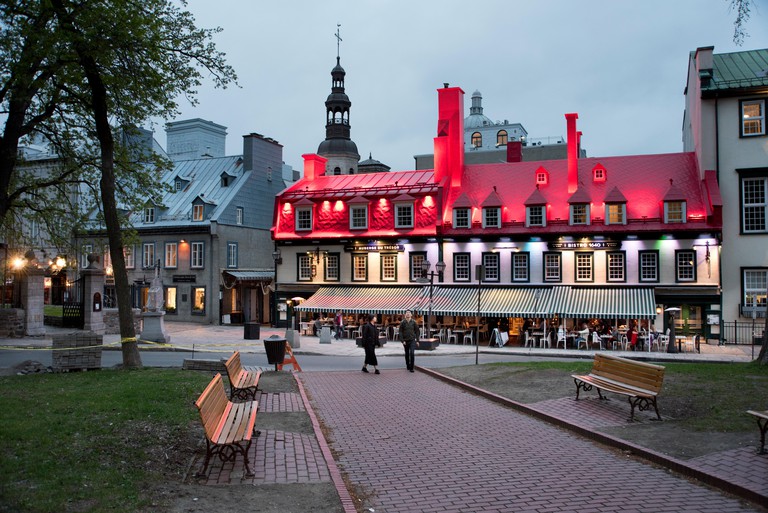 This cobblestoned, pedestrian-only street is lined with picturesque patios on one side and shadowed by the Holy Trinity Anglican Church on the other. The church is a designated national historic site, designed in a neoclassical Palladian style that offers a contrast to the more ornate Cathedral-Basilica of Notre-Dame de Québec over on Rue de Buade.