The 10 Most Beautiful Towns in Quebec

L'Anse-Saint-Jean, Quebec | © Charles-David Robitaille/ Flickr
The largest province in Canada, Quebec is known for its breathtaking natural geography that incorporates mountains, forests, valleys, and maritime views. With a long indigenous history and mixed settlement heritage, the towns and villages that are scattered through the landscape offer insight into the province’s architectural past and present. Taking you beyond the popular destinations of Montreal and Quebec City, here are ten of the most beautiful towns in Quebec.

Located in the Bas-Saint-Laurent region of Quebec, Notre-Dame-du-Portage is a member of the Association of the Most Beautiful Villages of Quebec. This charming village has been a popular vacation spot for many years now, with its beautiful architecture and natural surroundings. 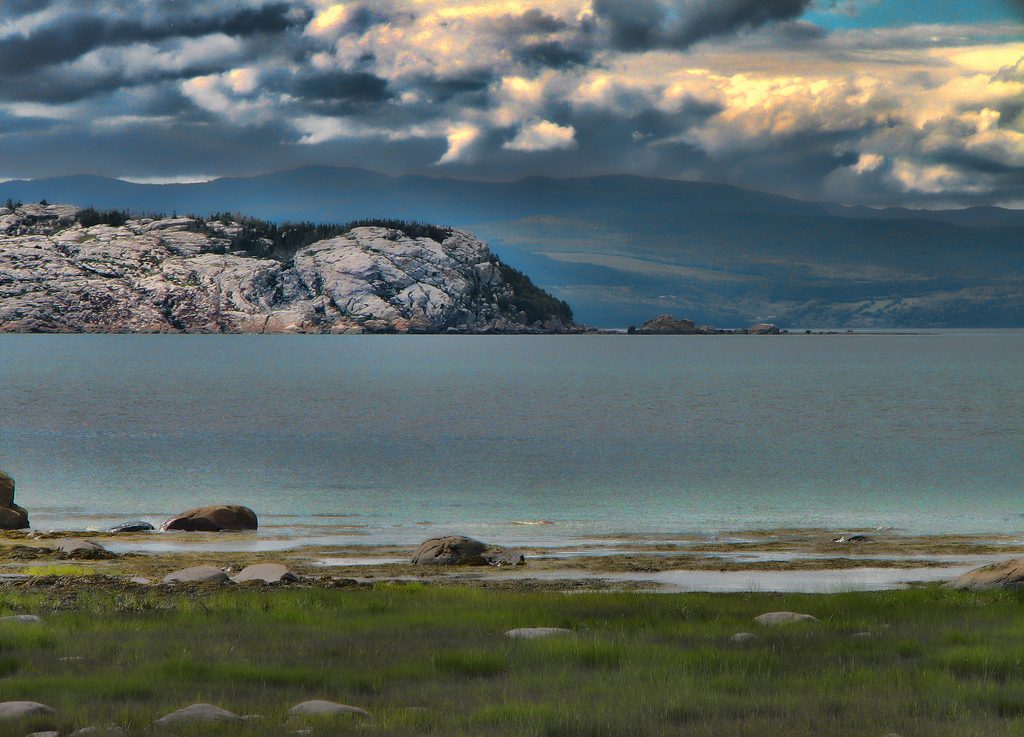 Calling itself the “Capital of the Detective Novel,” Saint-Pacôme is another must-see village of the Bas-Saint-Laurent, situated among the foothills of the Haut-Pays (Upper Country) and the meandering Ouelle River. Here you can find stunning landscapes, best seen from the top of mountains or designated lookout locations. The village itself is characterized by historical architecture, framed by hiking paths that lead visitors deeper into the local countryside. Two other beautiful villages in the same region are Kamouraska and Cacouna.

Located right at the Quebec-Vermont border in the Eastern Townships, Stanstead was founded by pioneers from New England in the 1790s. Prior to European arrival, the area was home to the Abenakis. The town grew through the 19th century through the arrival of United Empire Loyalists and the development of the granite industry. As a result, the town is home to collections of beautiful historic buildings. The main route, Dufferin Street, has been called an “outdoor museum” due to the numerous churches and other landmark buildings, such as Stanstead College (1873), the Collège des Ursulines (1881), and the former post office.

Situated in a 100 km-wide meteor crater, Les Éboulements (named for a landslide that followed an earthquake in 1663) in the Charlevoix region has been a popular vacation destination since 1900. Nestled 200 metres above the St Lawrence River, the town maintains multiple art galleries and inns that enhance the experience of viewing one of the most breathtaking panoramas in Québec. The area overlooks the river, where ships head toward the ocean, along with the Appalachian plateau, the Charlevoix capes, and Île aux Coudres. 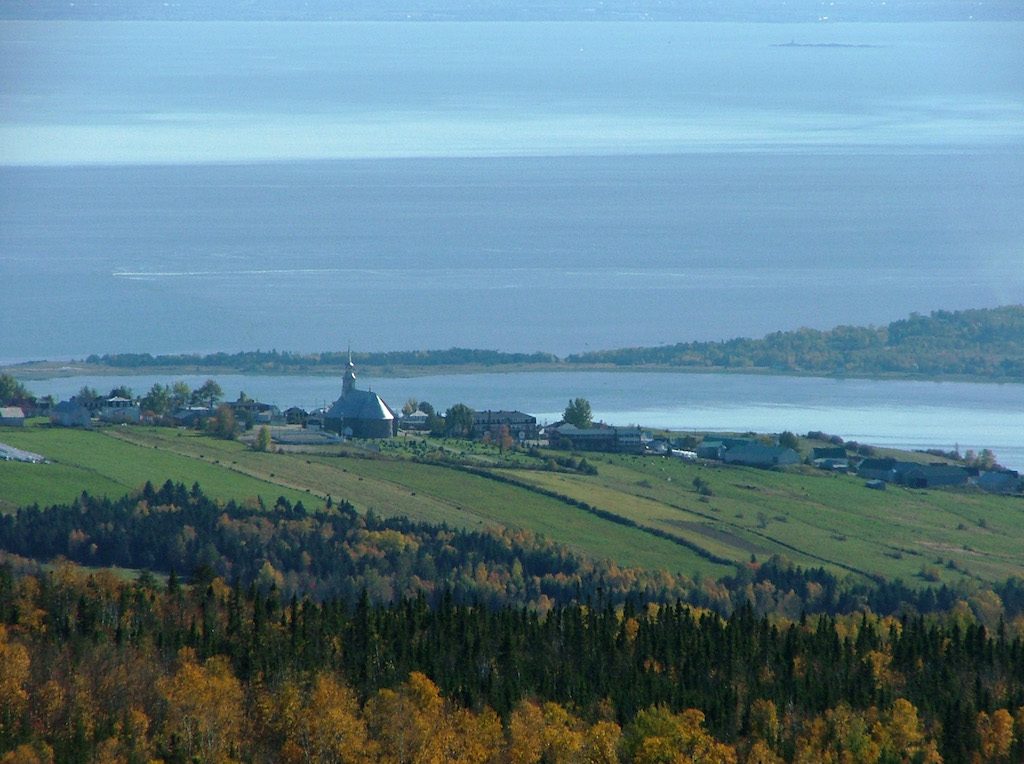 View from a mountain of Les Éboulements, Quebec | © Malagauche/ WikiCommons

Around 30 kilometres from Quebec City on the banks of the St Lawrence River, Saint-Michel-de-Bellechasse offers a beautiful view of the river’s estuary and channel, with Île d’Orléans framed against the background of the Laurentian Mountains. The town has a population of around 1,800, and Old Saint-Michel displays quaint white wooden houses influenced by the Neo-Classical style of the 19th century, along with a convent and church, a presbytery (1739), Notre-Dame de Lourdes chapel (1879), and the Benoît Lacroix library (1850). Visitors can also enjoy the village’s heritage walk, artist’s workshops, and the Musée le Voiturier (miniature carriage maker), along with a summer theatre. 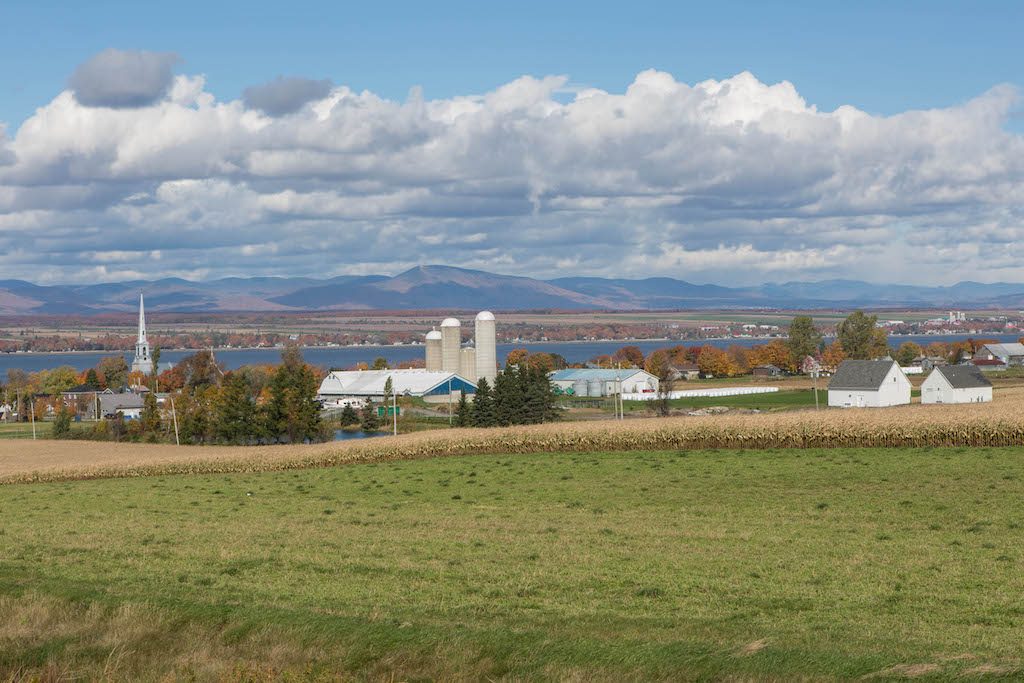 At the gateway of the Gaspé Peninsula, Métis-Sur-Mer takes its name from the Mi’kmaq word that means meeting place. Established by Scottish settlers in 1850, the area became a resort for English aristocrats during the 19th century. They constructed grand Victorian summer homes and four distinct chapels: the Presbyterian Church (1847), the United Church (1866), the Methodist Church (1883), and the Anglican summer church (1905), along with a lighthouse built in 1909. With a population of around 600, Métis-Sur-Mer is located 350 kilometres from Quebec City and is celebrated for its maritime scenery.

Also located in Gaspésie, Percé was initially a small fishing village. Offering a stunning maritime panorama, the area is home to historic fishing buildings, ancestral houses, a museum, art galleries, and beaches. Some of its distinctive geographical features include Percé Rock, which resembles an enormous shipwreck, with steep cliffs on both sides and is accessible at low tide. Also, the nearby Île Bonaventure, a provincial park that offers a summer sanctuary for over 250,000 migratory birds. 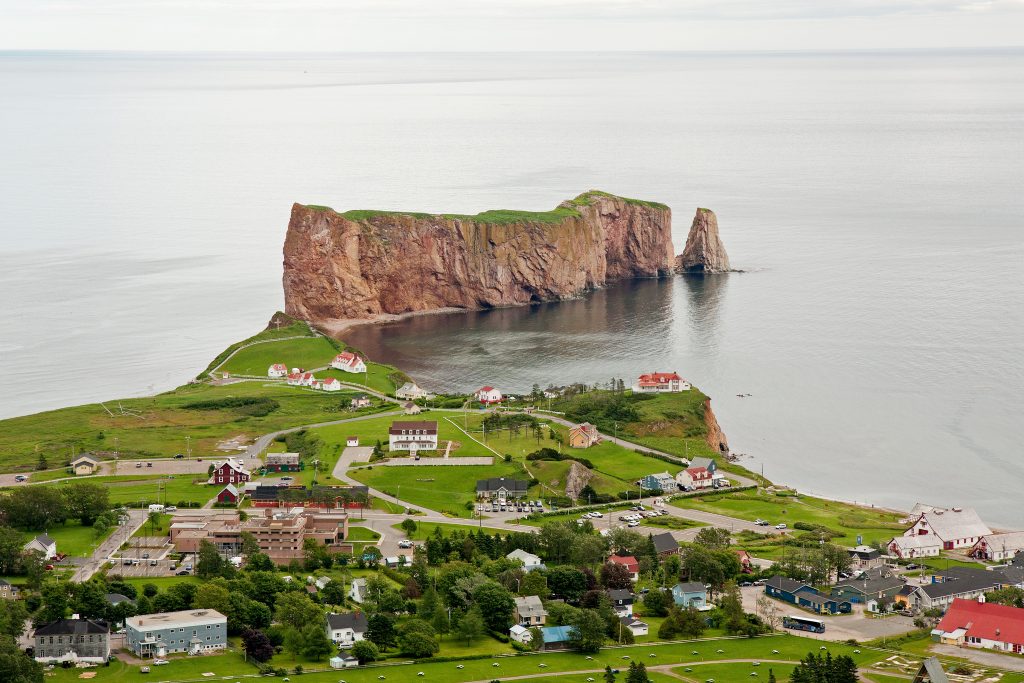 Île du Havre-Aubert is the largest island of the Îles-de-la-Madeleine archipelago, a series of islands located near the mouth of the St. Lawrence River. Six of these islands are connected by almost 100 kilometres of golden sand dunes, which contrast with the red rock of the cliffs, the blue-green sea and lagoons, and the colourful houses that pattern the landscape. In this area, fishing (mainly lobster, crab, and scallops) is a way of life. Île du Havre-Aubert is home to indigenous archeological sites and the historic La Grave quarter, which showcases historic fishing buildings, an aquarium, a maritime museum, cafés and boutiques. 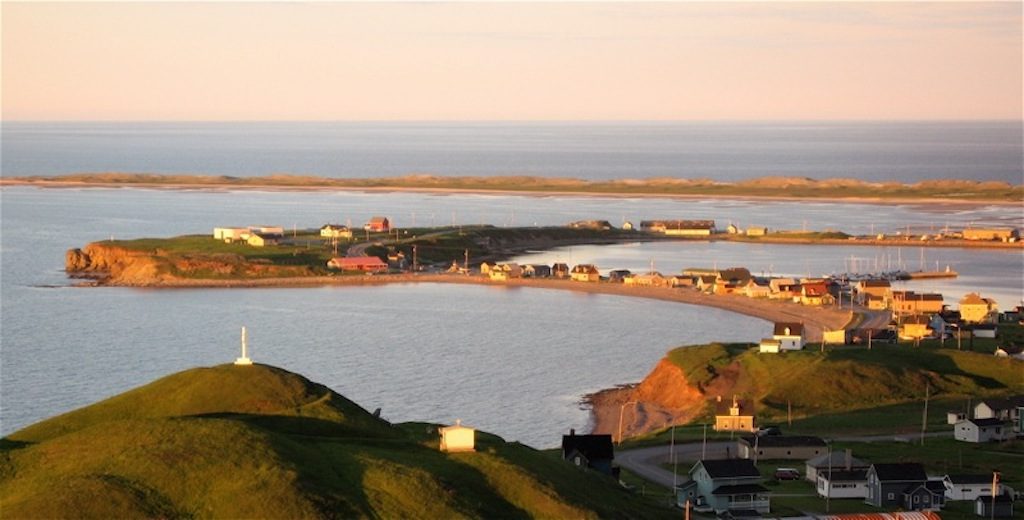 Located on the Chemin du Roy — which was the first road in New France (1737) along the north shore of the St. Lawrence River near Trois-Rivières — the town of Champlain is one of the oldest settlements in Québec: the first French settlers arrived in 1664-65. Through the 19th century the area became a resort destination. Now there are more than 200 buildings of heritage interest, including the impressive church (Notre-Dame de la Visitation), a 19th-century structure that contains elements of the first church of 1671. 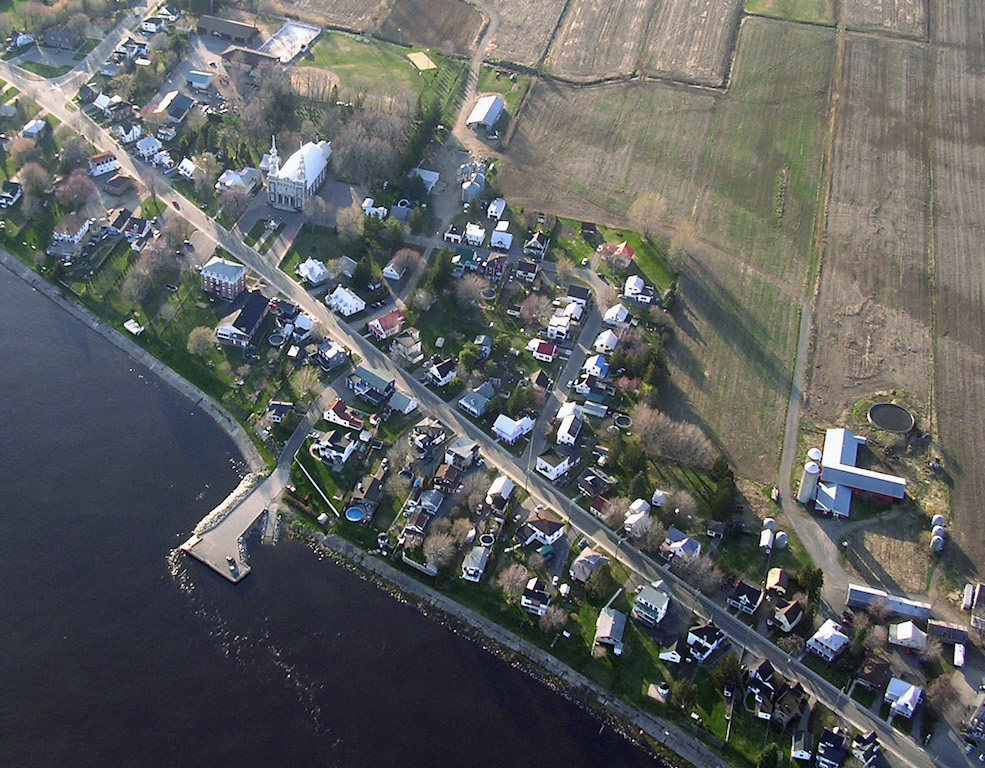 Beautifully located in a sweeping valley tucked in the bay of the St. Jean River and the fjord of the Saguenay, L’Anse-Saint-Jean is another village that offers breathtaking natural vistas. Here, visitors can enjoy kayaking in the ocean, sailing in the harbour, horseback riding, hikes along the capes of Saguenay Park, fishing, and in October, an art symposium (Villages en couleurs). In the winter, there are plenty of opportunities for both cross-country skiing and alpine skiing on Mount Edouard, as well as ice fishing on the fjord. 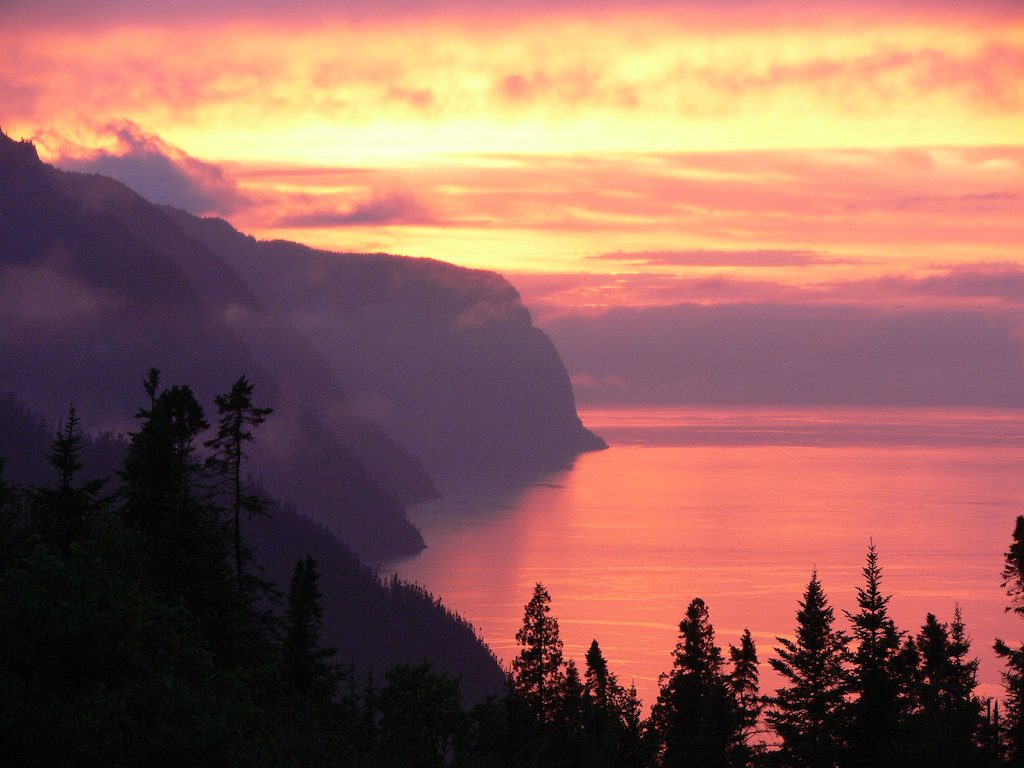