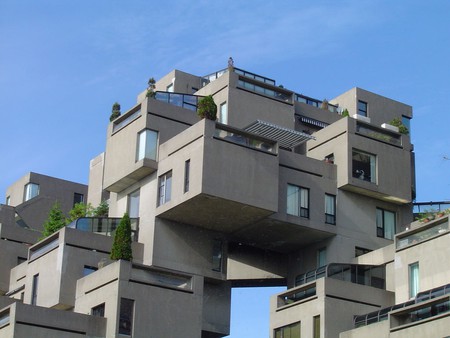 Montreal is home to a wide variety of architectural styles influenced by the interplay of both French and English colonial legacies, yielding beautiful examples of Art Deco, Gothic Revival, and other distinctive structures. But there is another side to the city’s architecture, representing a less charming but still historically significant side to the city’s landmarks. Here are some examples of the austere Brutalist-style buildings found across Montreal.

Brutalist architecture is not remembered for its beauty. A popular style that emerged between 1950 and 1970, Brutalism is easily recognizable by its angular, geometric shapes, plain gray façades, and the use of concrete as the primary building material.

Habitat 67 is probably the most easily recognized examples of Brutalist architecture in the city—and even beyond. Built by architect Moshe Safdie for the 1967 World Expo that took place in Montreal, it was designed as a form of experimental modular housing. It incorporates a three-dimensional landscape of 354 stacked concrete “cubes” and combines two major housing styles: the urban garden residence and the modular high-rise apartment complex. 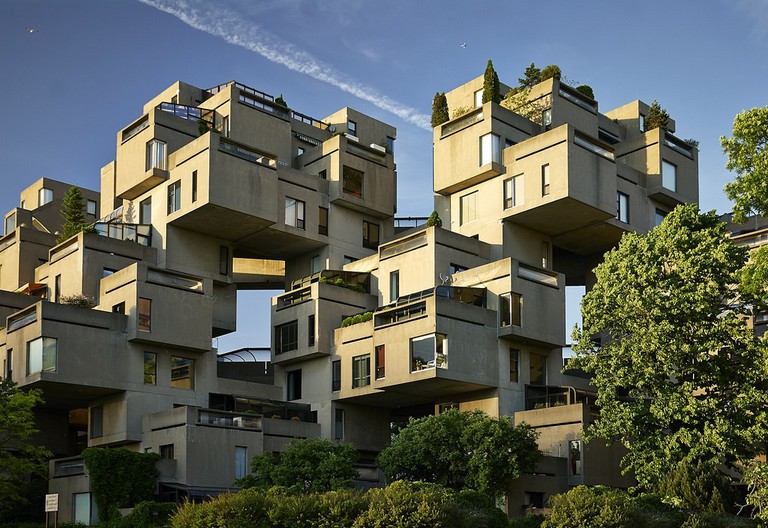 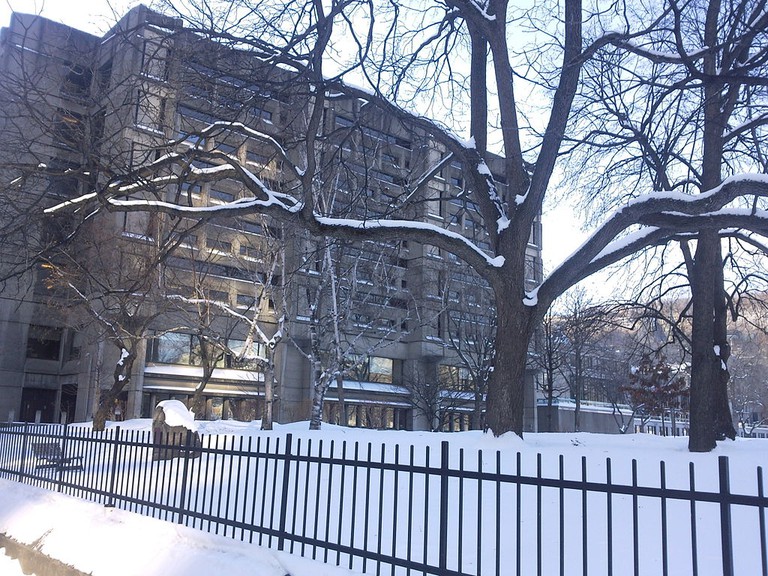 McLennan Library, McGill University | © Happysquirrel / WikiCommons
One of the bastions of McGill University, the exterior of McLennan Library, constructed between 1967 and 1969, remains in good condition. The windows give the building a Tetris-like style. Also representing the Brutalist past at McGill are the Burnside and Leacock buildings, with equally bleak interiors and exteriors.
Open In Google Maps
3459 Rue McTavish, Ville-Marie Montréal, Québec, H3A 0C9, Canada
+15143984734
Visit Website
Give us feedback

You can also head underground and find more prime examples of Brutalist influence. Many of the city’s metro stations were built during the heyday of this architectural movement, and Verdun is one of the most undeniable results. Heavy with impressive columns and concrete beams, you might feel as though you’re deep in an underground bunker during the Cold War. Other metro stations that are thoroughly Brutalist inside and out include Préfontaine, Lucien-L’Allier, Pie IX, and Angrignon—among others.

Got off the subway on krypton

Pavillon Judith Jasmin at the Université du Quebec à Montreal is an example of a Brutalist approach that makes use of construction materials other than plain concrete—though the harsh effect is ultimately much the same. While the structure features brick externally, the interior is still largely concrete. 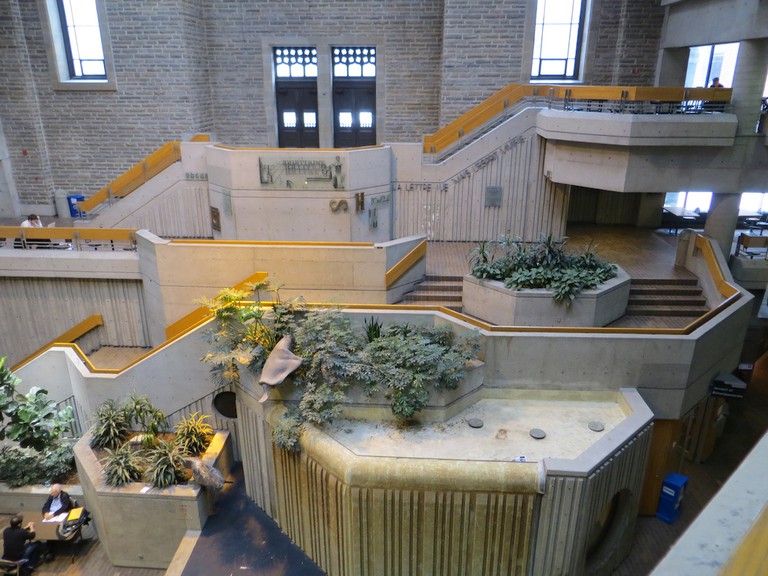 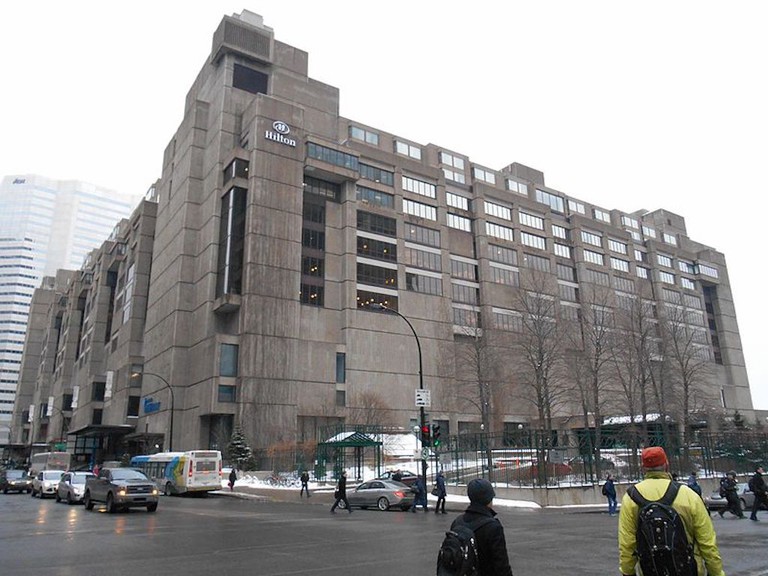 Place Bonaventure, Montreal | © Jeangagnon / WikiCommons
Place Bonaventure is a complex that contains offices, commercial and exhibition space, and a hotel in downtown Montreal. When construction was complete in 1967, it was the second largest commercial building in the world. The exterior walls are made of ribbed and sandblasted concrete, while the interior walls are a combination of sandblasted concrete and brick. In 1998, a $60 million renovation project focused on adding windows and a garden space to the severely styled building.
Open In Google Maps
240, 800 Rue De La Gauchetière Ouest, Ville-Marie Montréal, Québec, H5A 1K6, Canada
+15143972233
Visit Website
Give us feedback

Viger Square is a large urban square that holds a long history as a public space in the city. It started off as a plot of marshland in the 1840s and was transformed into a series of markets before road infrastructure changed the character of the area in the 1970s; the Ville-Marie Expressway was constructed underground, and the area underwent redevelopment with a strong concrete theme. 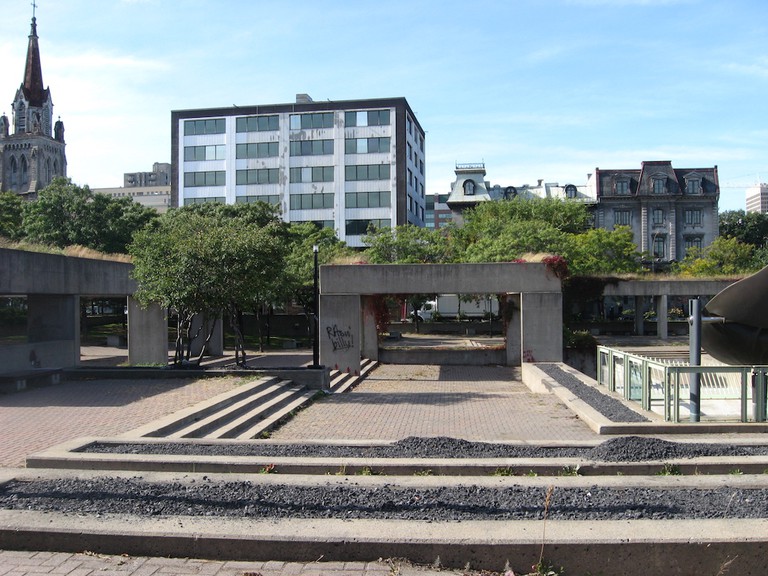 Although the interior of the Hôtel Le Germain contains a luxurious upscale hotel, the exterior is another one of Montreal’s Brutalist classics, with stiff angles and boxy geometrics, encased in heavy gray concrete.

University
Facebook
Email
Twitter
Pinterest
Copy link
Share
Map View
The Thérèse-Casgrain building is another example of the Brutalist influence on university construction, although its development took place in 1988–90, a bit after the movement’s main era. The structure has six stories and currently houses the Departments of Sexology, Religious Studies, Philosophy & Law, and the School of Social Work.
Open In Google Maps
455 Boulevard René-Lévesque Est, Ville-Marie Montréal, Québec, H2L 4Y2, Canada
+15149873000
Give us feedback
Give us feedback