Reasons You Should Visit Quebec City Over Montreal 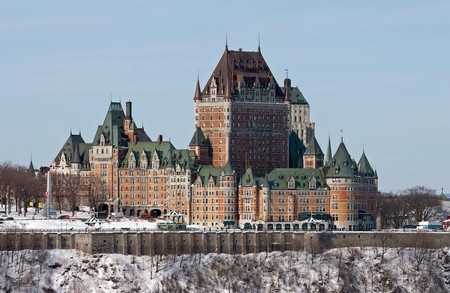 Quebec City and Montreal, Canada’s two famously French-speaking cities, are both must-sees – but for totally different reasons. While Montreal can entice with its cosmopolitan urban feel and buzzy restaurant scene, Quebec City is uniquely Canadian in its vibe – picturesque and with plenty of fascinating history, beautiful buildings and culinary classics. The cities are only three hours apart, but if you only have time to hit one, here’s why Quebec City should be at the top of your list of Canadian travel spots.

Yes, Montreal has a cute historic district with cobbled streets and old-world galleries and restaurants that are perfect for an afternoon of wandering. With that said, there’s almost nothing in North America that can compete with the grand walled fortifications of Old Quebec. A designated UNESCO World Heritage Site, it’s the only city north of Mexico City to still have its historic walls intact. Packed with 17th and 18th-century buildings, Old Quebec makes for a deeply atmospheric visit. Head to the quaint Quartier Petit-Champlain in particular, an ideal neighborhood for boutique shopping. 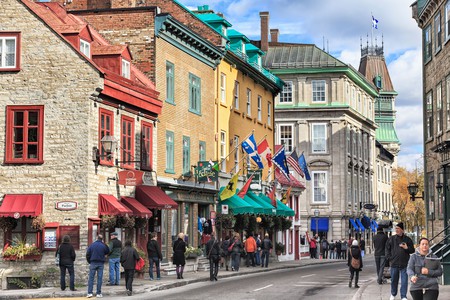 Montreal’s diary is packed with festivals year-round, from June’s International Jazz Festival to January’s outdoor electronic music festival, Igloofest. In Quebec City, there is one frosty annual highlight occurring every February: the Carnaval de Quebec. First held in the 1890s, it’s been an annual celebration since the 1950s and features magnificent ice sculptures, night parades, frozen canoe races and a cheery snowman mascot, Bonhomme. Grab a glass of caribou – similar to mulled wine but with added whiskey and maple syrup – and get involved. 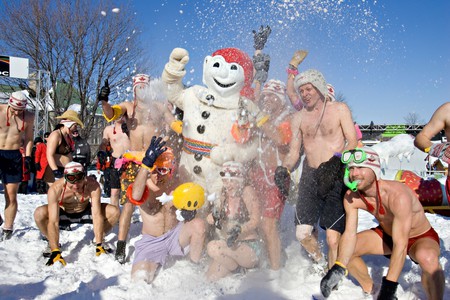 Montreal is an island and while there are beautiful green spaces both within and just outside of its urban heart, Quebec City’s epic natural setting takes first place. Just northeast of Old Quebec, along the Saint Lawrence River, the gushing Chute Montmorency, bookended by forested cliffs, towers at 272ft (83m) – even taller than Niagara Falls. Within a 30-minute drive of the city, you can find valleys, lakes and verdant mountains in addition to dense forest and rolling fields. Just across the Saint Lawrence is the scenic Île-d’Orléans, home to historic villages and strawberry farms. 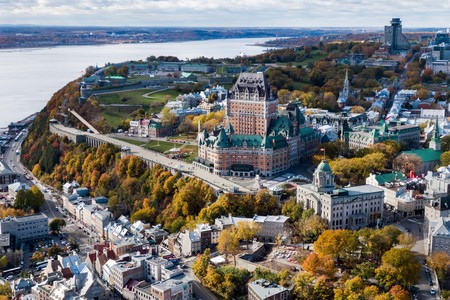 Canadians take tobogganing seriously. This 19th-century toboggan run – one of the oldest attractions in town – has sent families whooshing through Quebec City every winter since 1884. Hop on a wooden sled with up to three of your nearest and dearest and slip down the run, overlooking iconic Château Frontenac on one side and the Saint Lawrence River on the other, at speeds of up to 70 kmph (43 mph). 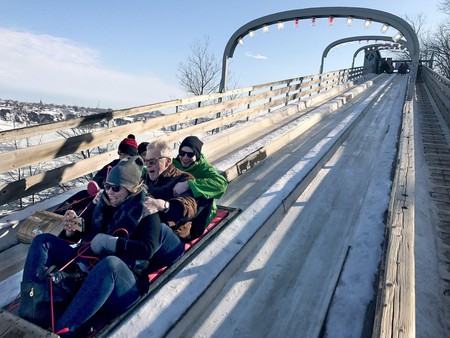 Although Montreal is the largest French-speaking city in the world after Paris, in truth the heart of the city is fluidly bilingual. For a fully Francophone experience where you can practice your concentration skills and get a sense of true Québécois culture, Quebec City delivers in spades. 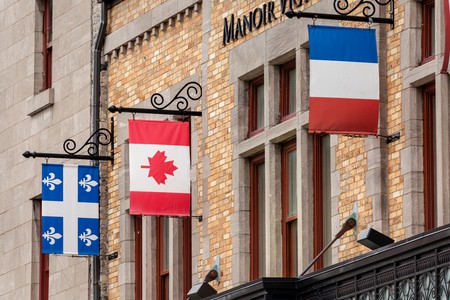 With over four million residents, Montreal is one of Canada’s largest cities – and with that comes a dense, urban and cosmopolitan feel. While this does bring its thrills, there’s something charming about the intimate size of Quebec City. The city’s metro population is just over 800,000 but don’t for a moment think this is some sort of backwater. As the second-largest city in the province and the seventh-largest in Canada, Quebec packs a hefty cultural punch.

History buff? While you’ll find glimpses into Canada’s French history in Montreal, Quebec City is bursting with must-sees that are, in many cases, older than the country itself. From the gilded Notre-Dame de Québec Basilica, built in the heart of Old Quebec in 1647, to the city fortress – Canada’s oldest military building – you’ll find historic structures aplenty here. Museum-lovers will get their kicks too – Quebec City is home to the quirky Musée de la Civilisation, one of Canada’s most-visited museums, as well as the masterpiece-stuffed Musée national des beaux-arts du Québec. 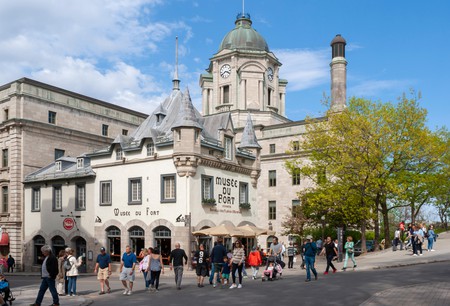 Fancy meeting a polar bear? How about a walrus? Well you can do exactly this at Aquarium du Quebec, a huge space that is home to over 10,000 animals, including amphibians, reptiles, invertebrates, sea mammals and lots and lots of fish. Just a short trip from downtown Quebec City, the place is especially great for families. In the presence of an animal guide you can touch Atlantic rays and horseshoe crabs, and kids can burn off energy on an outdoor adventure circuit. 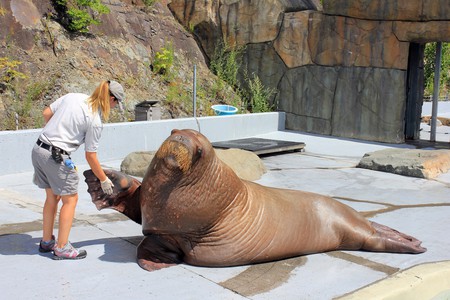 Quebec City might just be the world capital of ice-skating. Throughout the frosty winter months, you’ll find outdoor skating rinks tucked in among snow-dusted patches of forest, on lakes at ski resorts and beside some of the city’s historic sights. One of the most charming is the rink at Place D’Youville, butting up against the atmospheric old stone walls of Porte Sainte-Jean. Don’t have your own skates? Not to worry – you’ll be able to hire them on site. 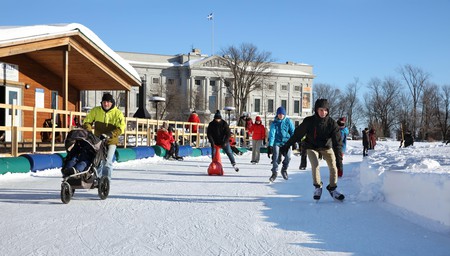 Montreal has great hotels, but nothing quite like Quebec City’s incredible Hôtel de Glace. North America’s only ice hotel, its 44 rooms are constructed every winter using approximately 30,000 tons of snow and another 500 tons of ice. Complete with a chapel, an ice slide and even an outdoor hot tub, the hotel hosts daytime tours if you don’t fancy braving the chill on an overnight stay. 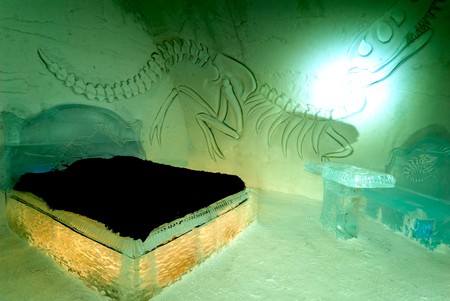 Ferry rides on the Saint Lawrence

The mighty Saint Lawrence River weaves its way by both Montreal and Quebec City. In fact, this essential artery played a key role in helping both cities to thrive. When it comes to taking to the waters though, Quebec City does so with real style. Hop on a ferry ride in the warmer summer months and you’ll be rewarded with views of the surrounding countryside as well as Quebec City’s beautiful historic skyline. The magical Château Frontenac, one of the most photographed hotels in the world, dominates the cityscape. 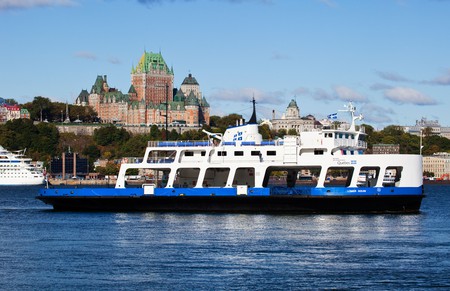 This is an updated version of an article originally by Emily Paskevics.