11 Reasons Why You Should Visit Quebec City 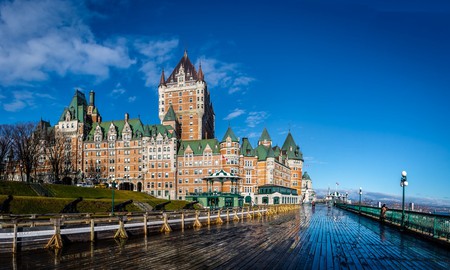 For travelers interested in history, architecture, and nature, Quebec City is a great destination. Although the city receives up to 13 feet of snow per year and the average daily high in December, January and February is only 21°F (-5.9°C), the city has something special to offer year-round. Here are some reasons why you should visit Quebec City, even during the winter.

To explore the historic district

Old Quebec City (Vieux Québec) is a designated UNESCO World Heritage Site. As the only city in North America north of Mexico City to have preserved its walled ramparts, Quebec offers a glimpse of what living in a fortified city several centuries ago looked like. The Upper Town is built into a cliff that offers expansive views of the mighty Saint-Lawrence River, and you can wander the cobblestoned streets of the Quartier Petit-Champlain, lined with cafés and boutiques, as well as explore the surrounding historic convents, churches, and monuments. 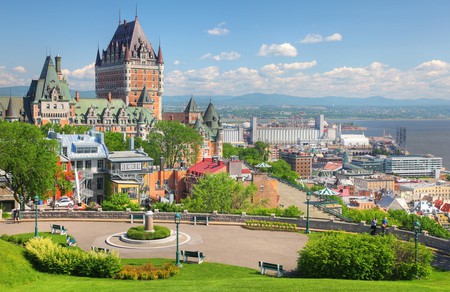 To visit the Ice Hotel in winter

Located just 10 minutes from downtown Quebec City, the Hôtel du Glace (Ice Hotel) has attracted around 43,000 overnight visitors since first opening in 2001. Consisting of 44 rooms constructed from 30,000 tons of snow and 500 tons of ice on the slopes of the Laurentian mountains, temperatures inside the hotel are an average of 26°F and 23°F (3°C and -5°C). The beds have a solid ice base, with a wooden bedspring and a mattress on top. The mattresses are covered with blankets, and people sleep inside arctic sleeping bags, so this experience is not for the faint of heart! Between 9 p.m. and 9 a.m., overnight guests have access to a Nordic relaxation area with outdoor spas and saunas. But you don’t have to stay overnight to explore this unique hotel—which is the only one of its kind in North America. Tours and day packages are available, and you can even get married in the hotel’s ice chapel. 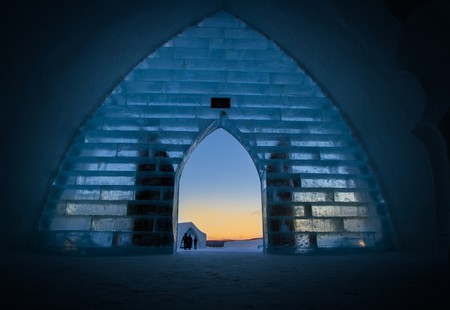 For the beauty of the surrounding landscape

Quebec’s provincial slogan isn’t ‘la belle province’ for nothing. With deep green valleys, wide lakes, mountains, fields, forests, and coastal cliffs, there’s always something beautiful to experience. The region surrounding Quebec City is worth exploring in addition to the historical and cultural sites offered within, which can be easily accessed through local day trips via car or train. 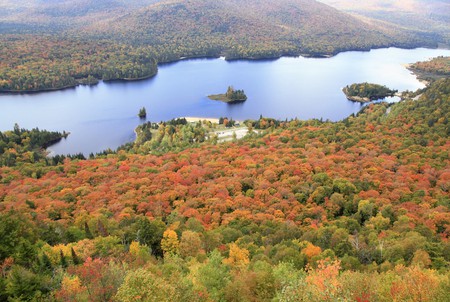 To visit the Basilica de Notre-Dame

Although the cathedral has been rebuilt several times through the years, the Notre-Dame de Québec Basilica has stood on the same spot in the heart of Old Québec since 1647. One of the oldest cathedrals in North America, the exterior might be a bit underwhelming when compared to the Sainte-Anne-de-Beaupré Basilica just northeast of town, but once you get inside you’ll enjoy the elaborate neo-Baroque design. The basilica houses historical religious paintings and other treasures that date back to the French-colonial period. There’s also the dimly-lit crypt, which is the final resting place of more than 900 people—including archbishops, cardinals, and governors. 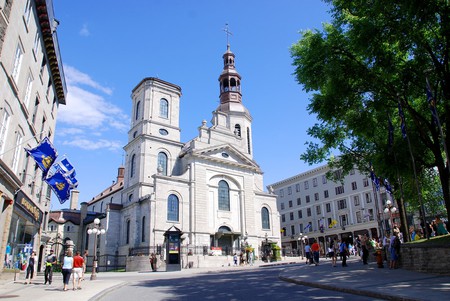 The library of Maison de la littérature is the most-Instagrammed interior in Old Quebec City—and with good reason. Often called the heart of Quebecois literature, the library blends contemporary design and Neo-Gothic architecture. With white walls, bookshelves, and tables, and the floors and stairs made of blonde hardwood, it’s the perfect escape from the bustle of the historic streets beyond.

To get a glimpse inside Le Château de Frontenac

Le Chateau de Frontenac is the world’s most photographed hotel, always appearing prominently in images of the city’s skyline. Beyond its fairytale looks, the hotel has been a National Historic Site of Canada in since 1980, and is also a UNESCO World Heritage Site. Designed in the 19th century, le Château de Frontenac is an important architectural and historical landmark. Even if you don’t stay overnight, visitors can take guided tours of the hotel that offer deeper insights into the Frontenac’s fascinating story. 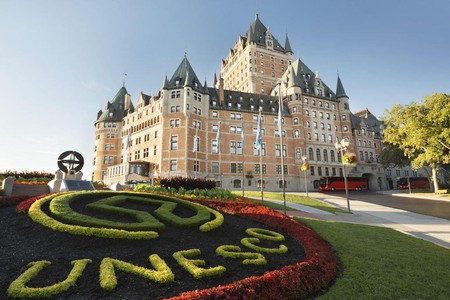 The Carnaval de Quebec is the most important event in the city year-round, and it’s one of the most famous winter carnivals in the world. Presided over by the well-known Bonhomme figure, which is a 400-pound, seven-foot-tall giant snowman wearing a red toque and sash, Carnaval takes place over a couple weeks in late January to mid-February—when the winter weather is just about at its harshest. Activities include sleigh and canoe races, snow sculptures, nightlife, fireworks, and different family activities. Around a million people attend the carnival annually, and it’s an event that you won’t want to miss if you’re planning a winter excursion to Quebec.

Situated just nine miles northeast of Old Québec along the St. Lawrence River, Parc de la Chute-Montmorency is a common morning or afternoon trip from the city. With its 272-foot cascade of water, these narrow falls are about one-and-a-half times taller than the mighty Niagara. Be sure to take a cable car to the top and walk across the suspension bridge to admire them up close—or take the winding wooden stairs. 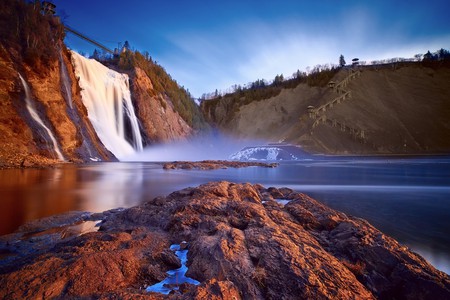 Quebec is home to a number of well-known museums and art galleries that give visitors the opportunity to explore the cultural past and present of the province—and beyond. Must-see museums include the three pavilions of the Musée national des beaux-arts du Québec, home to more than 25,000 works of art created in Quebec, and the Musée de la Civilisation, which receives almost 14 million visitors per year. 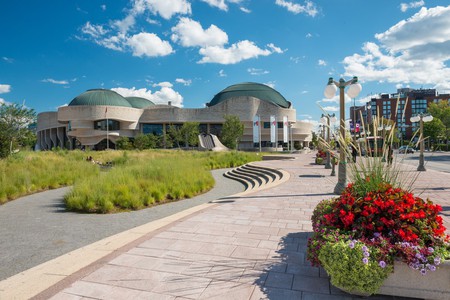 To explore a local sugar shack

Heading just outside of the city for an afternoon at a sugar shack is an unforgettable Quebec activity, and there are plenty of these cabanes à sucre within driving distance of Old Quebec. Here, visitors can learn about the process of making maple syrup, one of the main, quintessentially Canadian treats, while sampling different local delicacies and partaking in activities like sleigh rides, tobogganing, and more. Try the Sucerie Blouin, which is located on the nearby Île d’Orléans across the river from Quebec City. 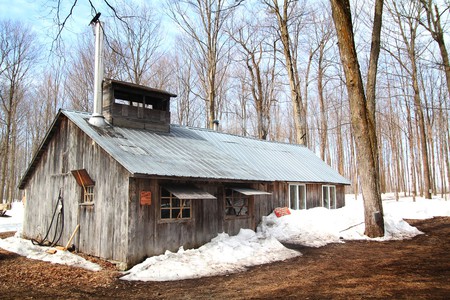 To ski or skate across the Plains of Abraham

These wide plateau were the site of the Battle of the Plains of Abraham in 1759, a crucial battle fought by the British against the French during the Seven Years War—ultimately deciding the fate of New France, which fell to the British. Nowadays, the Plains of Abraham offer some of the best views of the city, overlooking the Saint-Lawrence River. A large public park that is enjoyable at any time of year, during the winter visitors and locals alike make use of the 7.8 miles of ski trails, 2.3 mile out-and-back snowshoe trail, and 3.4 miles of walking trails. There’s also a skating rink open during the day. 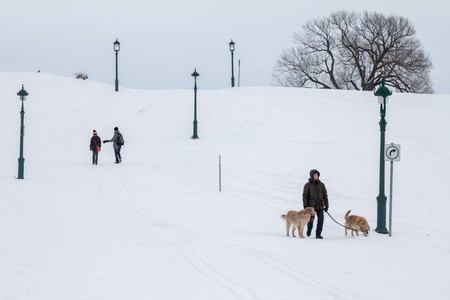