10 Great Family Vacations in Quebec if You're on a Budget 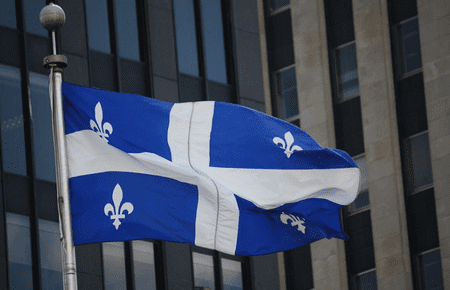 Quebec is the largest province of Canada, and celebrated for the diverse landscapes that earned it the motto of La Belle Province, or “the beautiful province”. There are countless vacations throughout Quebec that offer fun for the whole family, but we’ve narrowed it down to some of the best and most budget-friendly options.

La Gaspésie, or the Gaspé Peninsula, is known for its dramatic and stunning landscapes, which encompass pine forests and cliffs that overlook the Gulf of St Lawrence. Situated along the south shore of the Saint Lawrence River, there are numerous beautiful towns along the rocky outcroppings and shores. A popular destination is Percé, with its famous pierced rock, and the breathtaking Parc de la Gaspésie is always worth a visit for its outdoor activities. Camping starts at $33.50 per night. 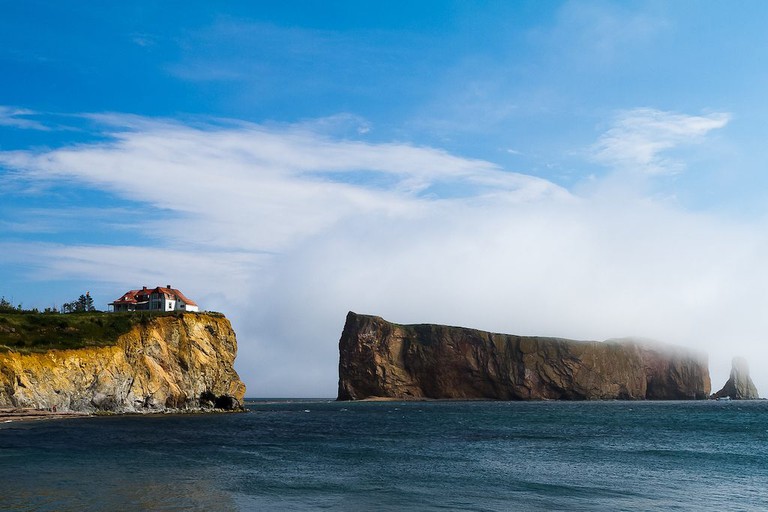 Quebec City is always a popular tourist destination, with its historical architecture and the fortified walls of the old city. The Aquarium du Québec, located in the former city of Sainte-Foy, is home to more than 10,000 animals that represent more than 300 species. The Aquariumhas a garden and outdoor pools in addition to a main building with several exhibits. The entry fee for adults is $19, and for children it’s $9.50. Family passes start at $38.

Hardly 20 minutes from the city is the Parc de la Chute-Montmorency, or Montmorency Falls. At 83 meters high, the falls are 30 meters higher than Niagara Falls. They can be explored on foot or by cable car and there’s a 300 metre-long zipline for those who want to add some adrenaline to the breathtaking views. For children, ziplining costs $18.75, and $25 for adults. The round-trip cable car costs $12.08 for adults and $6.15 for children. And kids under five can go for free. 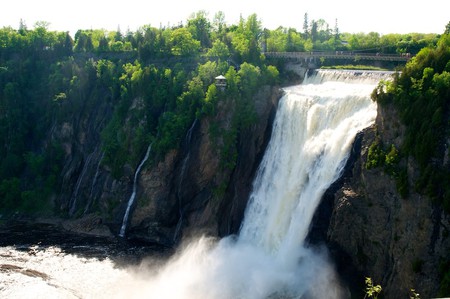 The Îles-de-la-Madeleine archipelago is a series of islands located at the mouth of the St. Lawrence River, around 105km north of the province of Prince Edward Island. The islands are a destination for cycling, kayaking, camping, as well as windsurfing and kitesurfing. On the largest island, Île du Havre-Aubert, there are indigenous archeological sites and the historic La Grave quarter, which includes historical fishing buildings, an aquarium and a museum, along with cafés and boutiques. The islands are accessible by ferry, starting at $52.25 for adults during the summer months (June 15 to Sept 14), and $26.30 children (5-12 years old). The ferry is free for kids under five-years-old. 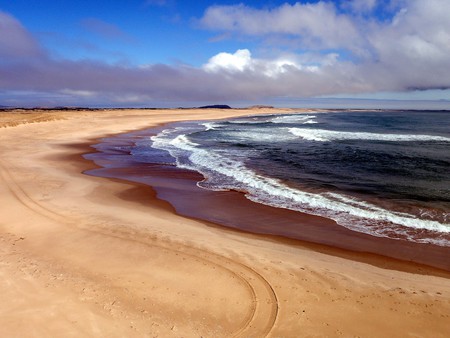 There’s plenty to see and do in the Laurentides, especially when it comes to outdoor activities. Le P’tit Train du Nord (‘Little Train of the North’) is a 200km linear park at the heart of the Laurentian region. The park follows an abandoned railway line that has since been converted into biking and hiking trails through the picturesque landscapes that run from Saint-Jérôme to Mont-Laurier. The trails are relatively easy to navigate and there are local companies that offer shuttle services if you only want to explore the area one-way. Many of the former railway stations have been repurposed into cafés, restaurants, and boutiques. Prices vary depending on the length and entry point of your route, starting at $12. It’s free for ages 17 and under.

The most popular spot in the Laurentians is Mont-Tremblant, characterized by the 968m-high mountain that gives the surrounding area its name—along with six rivers and 400 lakes and streams. Ville de Mont-Tremblant is an all-seasons recreational playground that attracts snowsports lovers through late October to mid-April, and hikers, cyclists, campers, rock-climbers, water-sports aficionados, and other outdoor enthusiasts throughout the rest of the year.

The Ville de Mont-Tremblant area is divided into three sections: Station Tremblant, the ski hill and tourist resort at the base of the mountain; the Mont-Tremblant Village, a quaint collection of homes and businesses about 4km to the southwest; and St-Jovite, which is the main town and commercial centre located about 12km south of the mountain. 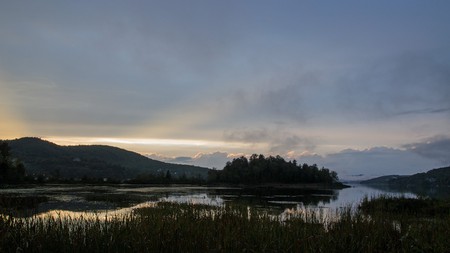 Mauricie is the region between Montréal and Québec City, north of the Saint Lawrence River. Encompassing 300km from Trois-Rivières north to Lac St Jean, the region also follows the mighty Rivière St-Maurice, which has been for the local industrial heritage. The landscape of Mauricie includes forests, mountains, rivers, and lakes. In the Laurentian Mountains, La Mauricie National Park is now a protected forest that was once extensively used for logging. Since it is a national park, day admission is free for 2017 as Parks Canada invites Canadians and visitors from around the world to celebrate Canada’s 150th anniversary. Campsite fees start at $25.50/night.

The city of Trois-Rivières was founded in 1634, making it the second-oldest North American city north of Mexico. A major fire in 1908 devastated much of the historical architecture, but the city is worth visiting for its numerous heritage sites and various festivals and events—including Festivox, which involves nine days of celebrations across 15 stages as renowned and emerging artists alike perform a variety of rock and pop music, jazz, French songs, choral music, folk songs, and more. Tickets start at $25/day.

One of the major conservation areas in Canada, and the largest in Quebec, Granby Zoo is located around an hour from Montreal. Home to over 1,000 different animals, Granby receives 516,000 visitors annually and is a great day trip for families. It also hosts the Amazoo water park, where families can cool off after a day of exploring wildlife from all of the world’s continents. Day passes are $39.95 for 13-64 year olds, $26.95 for 3-12 years old, $12.95 for two-year-olds, and free for children under two. Family passes start at $118.95.

While in the area, families can get even closer to nature by making a visit to one of the many parks in the vicinity, including Yamaska National Park, which has camping, cabin, and hotel options on-site. Camping starts at $21/night, cabins start at $149.00/night, and hotel rooms start at $100/night.

Heading out to a cabane à sucre is a quintessential experience in Quebec, and fortunately there are numerous sugar shacks located around the province. In the vicinity of Montreal, L’Hermine Maître Sucrerie, about an hour’s drive from the city, is a cozy sugar shack with a kid-friendly eating area. Musicians play traditional songs and children can watch the process of making sugar taffy. There are free sleigh rides, farm animals, a gift shop, as well as tours of the maple syrup production area. There are also pony rides for children on the weekends. Prices vary depending on the time of the visit, but generally adults pay between $17.50 and $23, for children aged 6-12 it’s $10.35 to $11.50, $6.90 for ages 2-5, and $2.30 for children aged two and under. 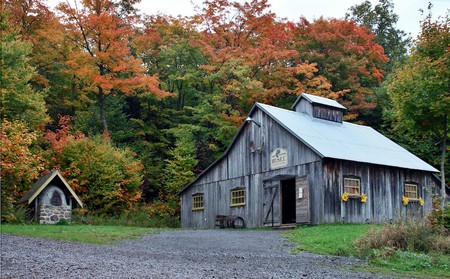 Even closer to the city is La Ronde, a popular amusement park on Ile Sainte-Hélène. As the largest amusement park in Eastern Canada and the second largest in the country, La Ronde was originally created for the 1967 International and Universal Exposition (Expo 67) and it’s now operated by Six Flags. Open from mid-May until late October, it’s a great way to spend a day with the family when the weather’s nice. Daily tickets start at $47.99 (online), and the park offers hotel packages if you’re looking to spend the weekend in the area. 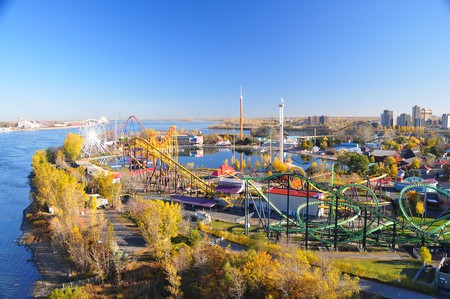