Why Sebastian Giovinco is Called 'The Atomic Ant' 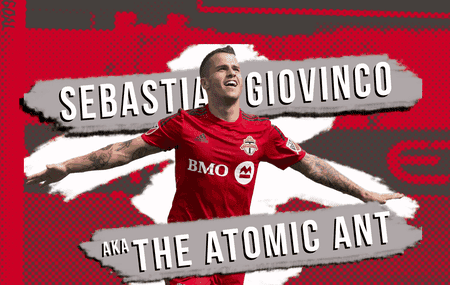 Sebastian Giovinco is usually one of the smaller soccer players on the field, but he doesn’t let his 5-foot-4 stature prevent him from doing what he does best — making dynamic plays and scoring goals. The Italian attacking midfielder/forward took Major League Soccer (MLS) by storm after signing with Toronto FC as a Designated Player on Jan. 19, 2015. He wasted little time putting his mark on the league, scoring 22 goals and adding 16 assists — for a league single-season record 38 points — in his debut campaign, while leading Toronto FC to its first playoff appearance. He is already the club’s all-time leading scorer.

Giovinco has one of the more unique nicknames in soccer, being called The Atomic Ant (Formica Atomica in Italian). It’s a nickname that was given to him by Juventus fans when he played for the Turin-based club from 2006-15. The nickname is a reference to The Atom Ant, a cartoon from the 1960s about an ant superhero who possesses incredible speed, agility and power.

According to reports, Giovinco is fond of the nickname. Because of his stature, Giovinco used to celebrate goals by putting his thumb on the top of his head and pointing his little finger to the sky.

“I’m not very big and many people told me over the years that I would never reach the top because of my size,” he told FIFA.com. “That’s why I do that celebration every time I score a nice goal. It’s my way of saying that I’m getting bigger.”

Giovinco was named MLS Newcomer of the Year, MLS MVP and MLS Golden Boot winner in 2015. He is a three-time MLS All-Star.