Where To Watch a Live Sports Game in Toronto 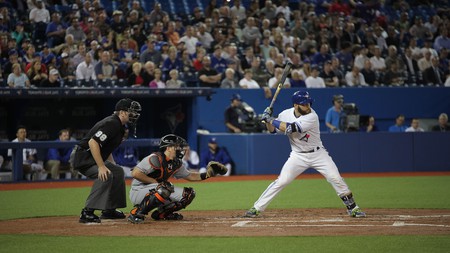 Cheer on the Raptors, the Maple Leafs and the Rock when visiting Toronto. Here’s how to watch a live sports game in the city, whether you’ve got a ticket or not.

The emotive nature of sports makes it an interesting expression of a city’s personality. In Toronto, there has, for a long time, been a mixed feeling of either underperforming or being the underdog. But as Toronto has transformed over the past five years, so has the mentality of its sporting culture. Home to Canada’s first-ever NBA champions, as well as competitive hockey, baseball and soccer teams, the city’s fan base is becoming increasingly expectant.

For visitors to Toronto, heading out to a game to revel in the atmosphere is an exciting way to immerse yourself in the fast and frenetic energy of the city. And with so many different sports on offer, there’s something for everyone.

Go to Scotiabank Arena to watch the Raptors, the Leafs and the Rock

Head to Scotiabank Arena to see Toronto’s most iconic team – the Maple Leafs (or simply the Leafs). With seats for nearly 20,000 people, it’s a hotbed of noise and passion when the Leafs are on the ice. The arena is also home to the 2019 NBA champions, the Toronto Raptors, and the lacrosse team, the Toronto Rock – the surface of the floor changes between ice, wood and turf depending on who’s playing. What doesn’t change each time is the support of the fans. Even when you find yourself in the nosebleed seats, the arena’s energy sucks you into the action on the pitch.

Check out the Rogers Centre for the Blue Jays 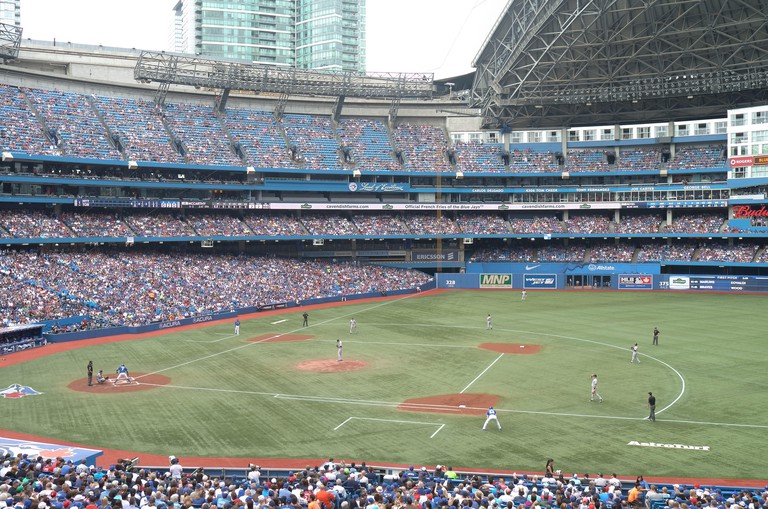 Catch a Toronto Blue Jays game at the Rogers Centre | © Robert Quinlan / Alamy Stock Photo
Home of the Toronto Blue Jays, the Rogers Centre is the biggest venue in the city, holding over 50,000 baseball fans, and offers a more laid-back sporting experience – except during the playoffs or a tight game. During the summer with the roof down and the sun shining, there aren’t many better spots in the city to enjoy a few drinks while cheering on the home team among friends. Getting tickets to the Blue Jays is fairly easy, especially if you’re able to go to one of the games during the day in the middle of the week. Watching the Blue Jays is a sporting experience that works equally for baseball fans and casual viewers.
Open In Google Maps
1 Blue Jays Way, Old Toronto Toronto, Ontario, M5V 1J1, Canada
+14163411000
Visit Website
Give us feedback

Rugby might not be the first sport that comes to mind in Canada, but the Toronto Wolfpack are bringing the game to a wider audience. Strangely, they play in the English Championship with an eye on one day competing in the English Super League. Home games, however, take place in Toronto’s West End at Lamport Stadium. The Wolfpack’s main crowd bring a party atmosphere, with the pastime being viewed largely as a fun novelty rather than one of Toronto’s major sports. For a spectator, it makes the experience both affordable and enjoyable.

Visit BMO Field, the home of TFC and the Argos 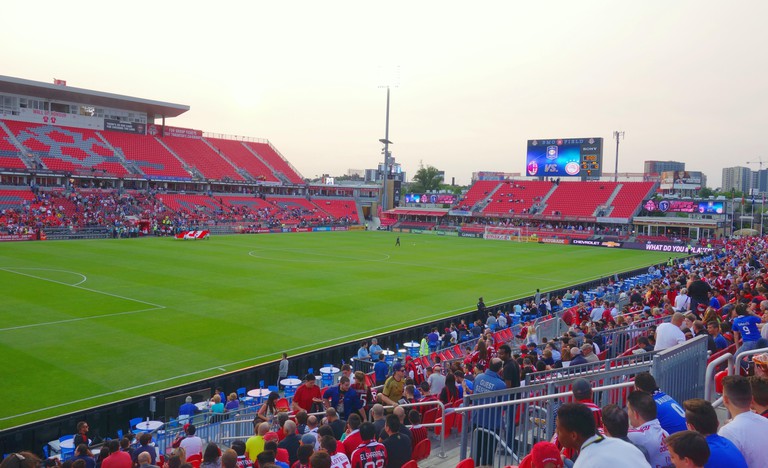 BMO Field hosts soccer and football games | © Valentino Visentini / Alamy Stock Photo
Two different types of football are available at BMO Field, where you can watch Toronto FC (the city’s soccer team) and the Toronto Argonauts, or the Argos (the city’s Canadian football team). It’s a stunning venue that offers views of Lake Ontario. In the stands, you’ll find that TFC games are a fascinating mix of fans, with casual spectators rubbing shoulders with bouncing, chanting, chest-pumping, drum-beating diehards. And the Argos have brought tailgating to Toronto, making for a fun and lively atmosphere.
Open In Google Maps
170 Princes' Boulevard, Old Toronto Toronto, Ontario, M6K 3C3, Canada
+14168155982
Visit Website
Give us feedback

Support the Marlies at the Coca-Cola Coliseum

If an ideal trip to Canada means seeing as much hockey as possible, you can also watch it at the Coca-Cola Coliseum. The Toronto Marlies are the AHL team, making ticket prices to their games much more affordable than NHL games. The Marlies are often a feeder team for the Maple Leafs, with young players gaining experience before going up to the “big league.” As a result, the Marlies are an extremely well-supported team and give fans a chance to one day say, “I saw him before he made it to the NHL.”

No tickets, no problem

Because sports are so passionately followed in Toronto, failing to get hold of tickets doesn’t mean you miss out on the fun. In every pocket of the city, there are sports bars that range from dives to sophistication personified, where you can watch not only Toronto’s teams but those from all over the world in every imaginable sport. While finding a sports bar is not difficult, here are a few that are tried and tested.

Maple Leaf Square is a stone’s throw from the Scotiabank Arena and gives you the chance to enjoy the carnival atmosphere of live sports, even if you can’t get tickets. Known as Maple Leaf Square during hockey games and transforming into Jurassic Park for the Raptors, the site often looks and feels like contained pandemonium, especially during the playoffs. If you’re in town for a big game, you will have to arrive early to guarantee space because the square is prime real estate for fans without tickets. It’s the perfect place to see Toronto’s sporting culture up close and truly feel the passion.

Bar, Pub Grub, Canadian, $$$
Facebook
Email
Twitter
Pinterest
Copy link
Share
Map View
This renowned sports bar in Toronto is situated in the Downtown core and is always packed with fans. It has one of the largest HD TVs in any North American sports bar at 39 feet (12 meters) tall, but if you can’t see that, you can watch from any of the other 199 screens. An excellent draft beer selection complements a crowd-pleasing menu in this acclaimed behemoth of a venue.
Open In Google Maps
15 York Street, Old Toronto Toronto, Ontario, M5J 2Z2, Canada
+14168155983
Visit Website
Give us feedback

Hurricanes is a classic dive-style sports bar and has a screen in almost every corner. It serves a variety of food and drinks, complete with daily specials.

The Dog’s Bollocks is a dive-style bar on Queen Street West. It features many big-screen TVs and pool tables to keep you entertained during the break.

Located in the West End, Dog and Bear shows every sport imaginable and then transforms into a party spot as the night goes on.