What To See & Do In Toronto On A Layover 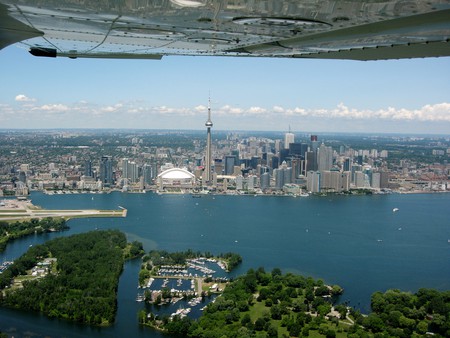 Toronto Pearson Airport (YYZ) is Canada’s largest and busiest airport, bringing in hundreds of thousands of travelers every year – many who are just stopping through on the way to Europe and Asia. Find yourself stuck in Toronto’s airport for a layover, and not sure how to pass the time? We’ve got you covered: from short to longer stays, read on to discover what to see and do while on a layover in Toronto.

If you have less than four hours:

Although the Toronto Pearson Airport is only located 25 kilometers (16 miles) from the city, leaving the airport amidst traffic and other delays can make getting back to the airport in time difficult if you’re only here for a short stopover. If your layover is less than four hours, YYZ has more than enough things to occupy you during this time.

At Pearson, there are plenty of restaurants where you can experience local Toronto eats and cuisine without leaving the airport. Go for a classic Toronto sammie at Caplansky’s Deli, the city’s most famous Jewish deli (located in both terminals); head to Vinifera wine bar for a few glasses of wine or beer from a local winery or brewery (both terminals); scope out what famed chef Susur Lee has to offer at Lee Kitchen (Terminal 1); experience Toronto’s Italian cuisine at Boccone Trattoria by Massimo Capra (Terminal 1); or, opt for a casual stop at Toronto’s Mill Street Brewery, a local’s favourite (Terminal 1).

While everyone knows duty-free is where it’s at when it comes to airport shopping – and there is plenty of this available in Terminal 3 at Pearson – for those looking for designer goods, Terminal 1 has boutique shops set up with big names like Burberry, Bulgari, Jo Malone, Gucci, Coach, Ferragamo and Hudson’s Bay Company, Canada’s largest department store.

Got some extra time on your hands? There’s plenty of things to do in Pearson to keep busy. Take advantage of the free WiFi and iPads scattered along the terminals; go for a 10 Minute Manicure (Terminal 1); or, head to Be Relax spa in Terminal 3, where you can get a chair or table massage, nail services, waxing and facials, all without an appointment – walk-ins are welcome. If you’re into just relaxing in a comfortable space, head to the Plaza Premium Lounge (Terminal 3) for comfy sofa chairs and loungers, TVs, a dining area, coffee, tea and bar service, showers with towels, soaps and shampoo included, WiFi, and even a private meeting room. Plus, it’s open almost all hours of the night, from 4:30 am-1:00 am.

There’s also Pearson’s permanent art collection, which is made up of eight installations compiled from artists around the world – the installation, which can be seen throughout the airport, represents Toronto’s role as a gateway to North American travel. Pearson also plays host to a series of changing exhibitions and a prehistoric dinosaur exhibit, A Scene from the Late Jurassic, donated by the Royal Ontario Museum (Terminal 1).

If you find yourself stopping over in Toronto for a longer duration, the UP Express – the new(ish) direct rail line to Union Station – gets city-goers to the heart of downtown in less than 25 minutes and for a mere $12 CAD. With traffic usually jam packed at all hours of the day, a taxi is not usually recommended; however, with a longer layover, or if a particular destination is in mind that is far from Union Station, a taxi is advised.

The CN Tower, Toronto’s iconic needle-shaped building that can be found in almost every photo of the city, should be on any traveler’s list. Located in the heart of the city and just a short walk from Union Station, the CN Tower stands at 457 meters (1500 feet) and boasts the best views of the city. If you happen to be in the city during the evening, the nighttime skyline is breathtaking. Head to the SkyPod for an even higher pano view – and don’t miss the famous glass floor. For those with extra time on their hands, the Rogers Centre and Ripley’s Aquarium are steps from the CN Tower.

Steam Whistle Brewery, the perfect pit stop for a brew or two, is Toronto’s famous local brewery set within the historic John St. Roundhouse, just south of the CN Tower. The Roundhouse, built in 1929, used to be a Canadian Pacific Rail repair facility that serviced steam trains for many years and served as the inspiration for this brewery’s name. Known for their pilsner, this historic brewery is a must-see for history buffs and beer connoisseurs alike – and, if you’ve got extra time, opt for a scheduled tour.

Hop aboard our Vintage Party Bus for a guided tour and taste of three local Ontario Craft Brewers. The party starts at our brewery, rolls on over to @leftfieldbrewery with last call at @amsterdambh. The party begins and ends at Steam Whistle Brewing. Pick-up: 11 a.m. Return: 5p.m The $85 ticket includes: 🍺Transportation to all 3 breweries 🍺Guided tour and taste at each stop 🍺5 additional drink tickets (bottles) 🍺Brown bag lunch courtesy of our Pretzel shop (vegetarian option available) *Tix are limited, get yours at the link in bio☝🏼️

St. Lawrence Market, which has operated as a public market since 1803, is Toronto’s oldest market – and one of the oldest in the world – with the North Market host to farmer’s and antique markets, and the South Market holding over 100 vendors, including bakers, butchers, produce, restaurants, fish mongers, and specialty shops. This famous market, which was named the world’s best food market by National Geographic in April 2012, is worth the visit, even for those here for a short period of time – and be sure not to leave the market without delving into a peameal bacon sandwich from Carousel Bakery, a Torontonian staple.

The Distillery District, previously known as the Gooderham and Worts Distillery, used to operate as one of the largest distilleries in the world, founded in 1831 and operating until the late 20th century. After operations closed, efforts to restore the historic area were assumed by the City of Toronto, turning cobblestone laden streets and brick façades into a charming nook of the city filled with art galleries, restaurants and shops meant for pedestrians only. A National Historic Site of Canada, this neighborhood is not to be missed.

The Distillery District, Toronto, ON, Canada

If you have a full day:

The Art Gallery of Ontario

With over 80,000 works from the first century to present day and over 45,000 square meters (480,000 square feet) of space to discover, there’s no wonder why The AGO is one of the most popular galleries in the city. Featuring Canadian, Renaissance, Baroque, European, and African art collections along with modern and contemporary works, The AGO is known for hosting some of the most significant art exhibitions in the world, including historical artifacts, photography, film and graphic art. Pop into the gallery’s upscale restaurant, FRANK, revel in Gehry’s spiral staircase, head to the library or have an afternoon tea at The Grange.

Who are you taking to the gallery tonight? We're free from 6pm to 9pm for #AGOWednesdays. Perfect time to take a stroll in Galleria Italia, and pick up some gelato and espresso before our free 7pm Q&A with new Director @stephanjostago on Level 3, Baillie Court. 📸 @yulischeidt // #Toronto #wednesdaywisdom #6ix #the6ix #free #yyz #museuminspiration

Another National Historic Site of Canada, Kensington Market is an eclectic neighborhood lined with painted Victorian homes from the 1800s, vintage stores, specialty food shops, restaurants and coffee shops. Bursting with culture and vibrancy, Kensington Market is a no-brainer for those visiting the city – get in touch with your inner foodie at Seven Lives, Otto’s Berlin Döner or Rasta Pasta; head to Sanagan’s Meat Locker or Blackbird Baking Co. for some specialty goods; or, have a seat on a patio, like Fika Café, and enjoy the view. People-watching is strongly encouraged.

There's a new post up on the blog about Kensington Market! 💕 #LinkInBio

West Queen West is Toronto’s artistic neighborhood in the west end of the city lined with art galleries, boutique shops, trendy restaurants and hip bars. For those short on time, a stroll down Queen West is all you need to capture the heart of this neighbourhood; if you’ve got some time to play with, pop into the chic shops, have a drink at the historic Gladstone Hotel, grab a bite at one of the local restaurants, or discover the street art and murals that decorate this part of the city. For more info or a scheduled tour, visit StreetARToronto.

If you’re in Toronto, or Canada for that matter, you cannot leave the city without trying the country’s quintessential dish, poutine. Made with crispy fries, melted cheese curds and warm gravy, who wouldn’t want to eat such melty goodness? At Poutini’s House of Poutine, keep it classic with the Poutini’s traditional poutine, or switch it up and go for the works with sour cream, bacon and green onions, or the BBQ pulled pork (vegan and vegetarian options available). Poutini’s now has two locations – one on King St – making poutine indulging that much easier.