What They're Listening To In Canada This Spring 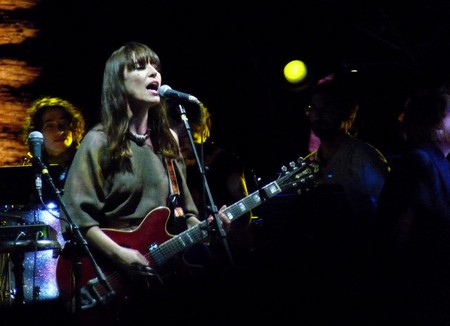 From art pop to prairie rock, singer-songwriters to francophone indie, there’s plenty to buzz about this spring when it comes to the Canadian music scene. Here’s a sample of some of the top tracks and latest albums that you won’t want to miss in the upcoming months.

Canadian alternative music darling turned international pop sensation Feist has released her first album since 2011’s Metals, and has received nothing but rave reviews across the board. Raw and spare, Pleasure is full of poetry and simple melodies that occasionally rise into explosions of sound.

Another creative powerhouse hailing from Montreal, She-Devils consists of Audrey Ann Boucher and Kyle Jukka. Their much-anticipated debut self-titled album will be released on May 17, 2017. The art pop duo’s sound creates its own sensory world, mesmerizing and both raw and ethereal. Their single Hey Boy made the top 30 this week.

Indie rock trio Close Talker hail from Saskatoon, in the Canadian prairies. Since 2012, the band has had two releases and numerous tours throughout North America, Europe, and the UK. Their latest recording, Lens, was released in April 2017, and by late May you’ll find them in Europe again. The album’s single Okay Hollywood has been very popular since it was first released.

Wilderness of Manitoba, The Tin Shop

The ever-evolving Wilderness of Manitoba has had consistent success since their 2009 debut Hymns of Love & Spirits. The band’s sound and members have changed through the past eight years, but with their new EP The Tin Shop (released May 5, 2017) the Wilderness of Manitoba offers six new lullaby-style songs that take the band back to its folk roots. The EP has been released ahead of the band’s full-length album, which will appear in August 2017.

Timber Timbre’s unusual sound has been classified as freak folk, psychedelic folk, and Southern gothic. After the release of their first self-titled album in 2009, this Ontario band has been steadily climbing the charts—with songs appearing in such shows as Breaking Bad and The Good Wife, among other screen credits. Their sixth album, Sincerely, Future Pollution, was released in April 2017 and Velvet Gloves & Spit has remained steadily among the country’s top 30 songs.

Currently based in Montreal, Fleece has an unusual take on the indie rock genre through the band’s blend of psychedelic rock, grunge, and jazz. With two LPs and an upcoming tour through the United States slated for Spring 2017, their energetic new record Voyages was released earlier this year. What You’ve Done is the popular second single from the album.

French Canadian Julien Sagot’s dark sound is all at once slightly creepy, poetic, and unforgettable. A self-taught musician, Sagot worked as a florist in Montreal and participated in the city’s weekly Tam-Tams percussion tradition in Mont Royal Park. Ombres Portées is from his recently released album called Bleu Jane.

The Weeknd ft. Daft Punk, I Feel It Coming

No list of Canadian favourites would be complete without some of the country’s best-known pop stars. Still going strong this spring, you’ll hear this earworm blasting from every other store in the country’s major malls. Other notorious Canadians you’ll find on the current billboards include Drake with Passionfruit and Justin Bieber featuring in Luis Fonsi & Daddy Yankee’s Despacito.