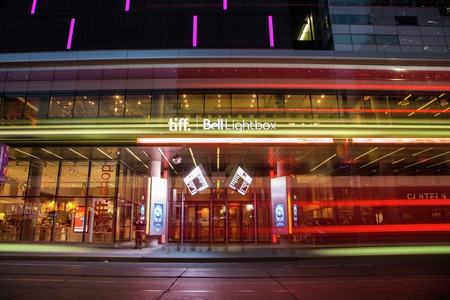 As the temperature drops and the city’s sidewalks get slick with ice, salt, and slush, the appeal of getting dressed up and heading out for a night on the town is acutely diminished. Next time you’re in the mood for something a little more exciting than Netflix and chill, but less extravagant than a three-course meal, grab your squad and head to one of these awesome theaters in Toronto.

Since opening in 1913, this Annex staple has changed its name, ownership, and design a bunch of times, but has always managed to keep its edge. Originally named Madison Picture Palace, the theater set itself apart by showing discount movies that had already premiered. Since 2012, it has functioned as the official space for the Hot Docs Film Festival, during which it is customary to see the street lined with eager documentary film enthusiasts. If hard-hitting and honest biopics are your thing, catch the Rocky Horror Picture Show screening that has held a monthly slot for over 20 years. Expect to see the cast of Excited Mental State performing in front of the 1975 flick, while cult fans shout call-back lines and toss props around. 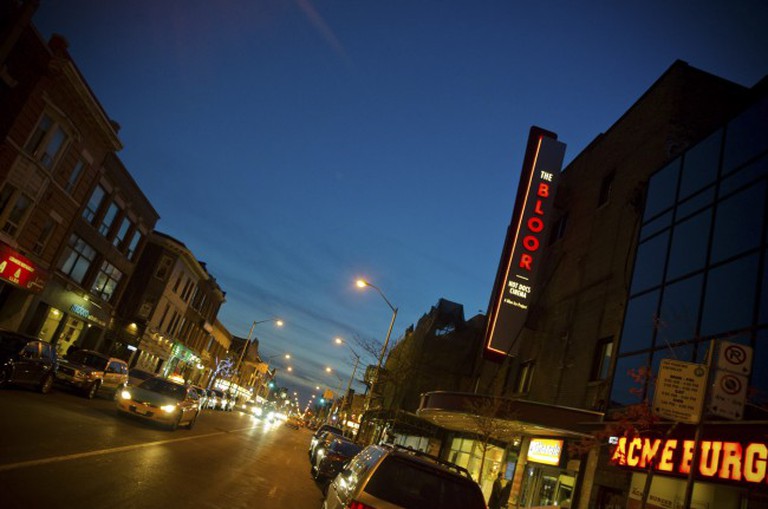 From 1917 to 2006, this Roncesvalles gem was in the race for the country’s longest running theater but closed its doors when it went up for sale. They didn’t stay closed for long, though, as community residents and film connoisseurs quickly rallied together to revive The Revue. Forming the Revue Film Society (RFS), volunteers helped negotiate the sale of the building to a local couple. With the support and generosity of local businesses, the non-profit community group revamped the space and gave it a lasting neighborhood feel. Pop in for a taste of “Reel Diversity, Real Community” and watch anything from (almost) new releases to family flicks like Space Jam and even occasional screenings of movies you love to hate, hosted by Drunk Feminist Films. 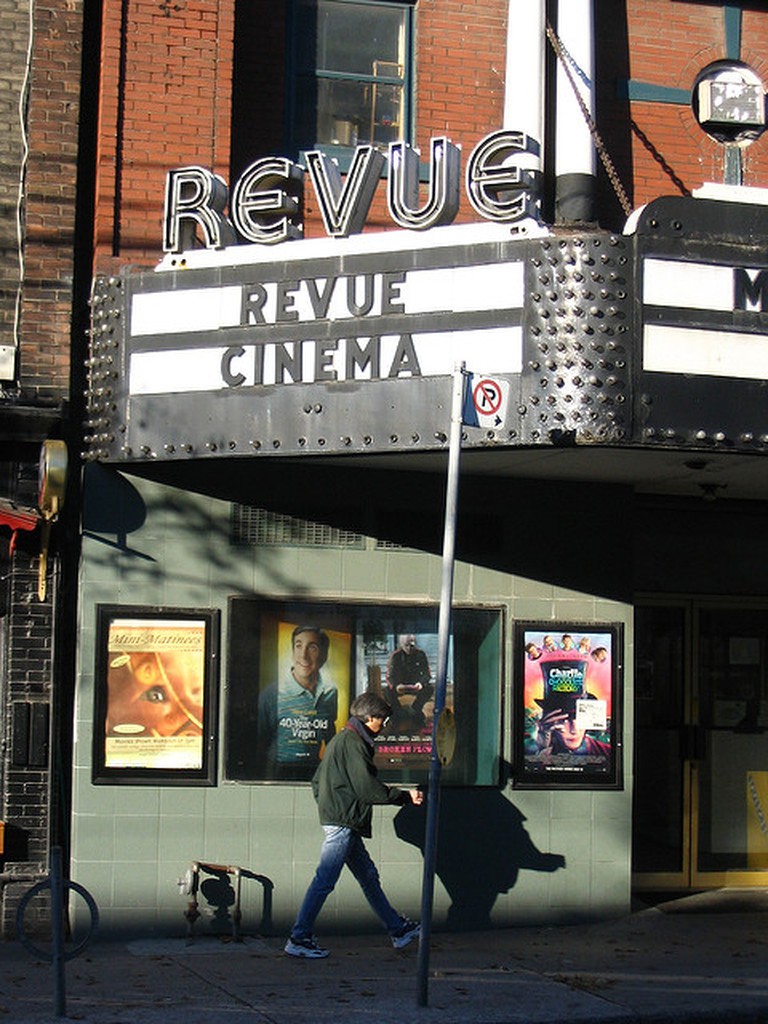 Cinema
Facebook
Email
Twitter
Pinterest
Copy link
Share
Map View
This Little Italy landmark was almost lost in the 2000s before Theatre D Digital swooped in and helped save Toronto’s cinema scene for the second time. The film company refreshed the art deco space, turning it into a multi-functional facility suited for screenings and post-production editing and mixing. Canadian directors like Deepa Mehta and Atom Egoyan have debuted acclaimed pictures at The Royal. The high-tech digs are now suitable for live broadcast events and concerts, or you can catch a classic flick where matinee and late-night rates are only $8.00 for adults and $6.00 for students.
Open In Google Maps
608 College Street, Old Toronto Toronto, Ontario, M6G 1B4, Canada
+14164664400
Visit Website
Give us feedback

Surrounded by quaint shops, this 1920’s Mount Pleasant theater keeps up the old-timey vibe on one of Toronto’s few streets not engulfed by skyscrapers and condos. While industrial architecture and apartments buildings guard Eglinton to the north and Davisville to the south, this little taste of Toronto’s past reminds moviegoers of a time before raised seating and when concession stands didn’t bleed high-fructose corn syrup. The building is leased by the same post-production company that helped out The Royal, operating as a high-tech editing studio by day and movie theater by night. 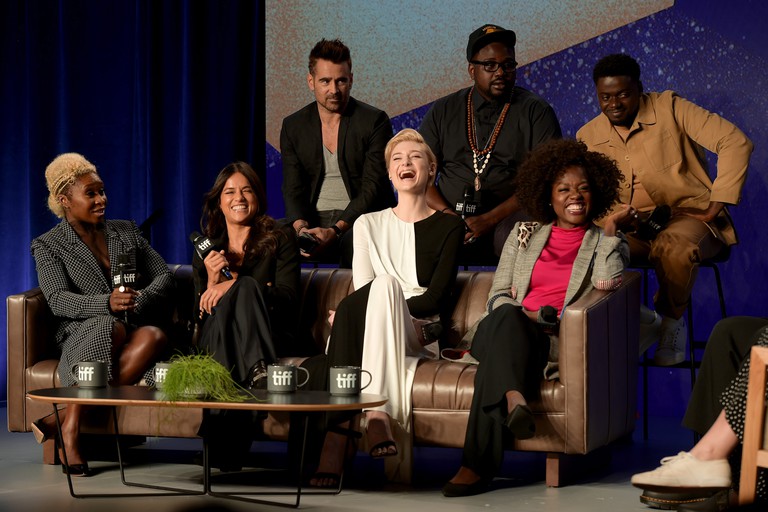 TIFF Bell Lightbox is the hub of the Inside Out LGBT Film Festival | Courtesy of Getty Images
This notorious theater is the official headquarters (since 2010) of the Toronto International Film Festival and is appropriately located in the heart of the entertainment district. Browse movie merchandise in the gift shop, brush up on film history at the extensive reference library and check out awesome exhibitions like the upcoming digiPlaySpace, an interactive tech playground for curious kids and grown-ups who love to play. Between all the festival selections and Oscar nominations, you’re sure to see a few of the year’s best pictures as well as well-loved classics.
Open In Google Maps
350 King Street West, Old Toronto Toronto, Ontario, M5V 3X5, Canada
+14165992033
Visit Website
Give us feedback

At the eastern end of the beaches is Toronto’s longest running cinema, The Fox. The old fashioned exterior is a welcome change from over-the-top, megaplex movie theaters. It staked a well-earned claim in the community after the original ownership fought hard for its inauguration, petitioning neighbors and asking for their support before opening. You can’t buy tickets online, so head to the box office half an hour before the movie starts to grab a good seat and some snacks. Memberships ($10) get movie goers a $6 special on Tuesdays, plus 10% off at the concession stand.

At the opposite end of the city in Bloor West Village is the independent Humber Cinemas. With well-worn carpets and balcony seating, this theater has a vintage vibe despite closures, renovations, and reopenings at various points in the last 17 years. What it lacks in big screens and super-loud sound, it makes up for in cotton candy. Plus, with more intimate screens and seating, you won’t be feverishly flinging your head around to see glimpses of scenes your peripheries can’t catch. 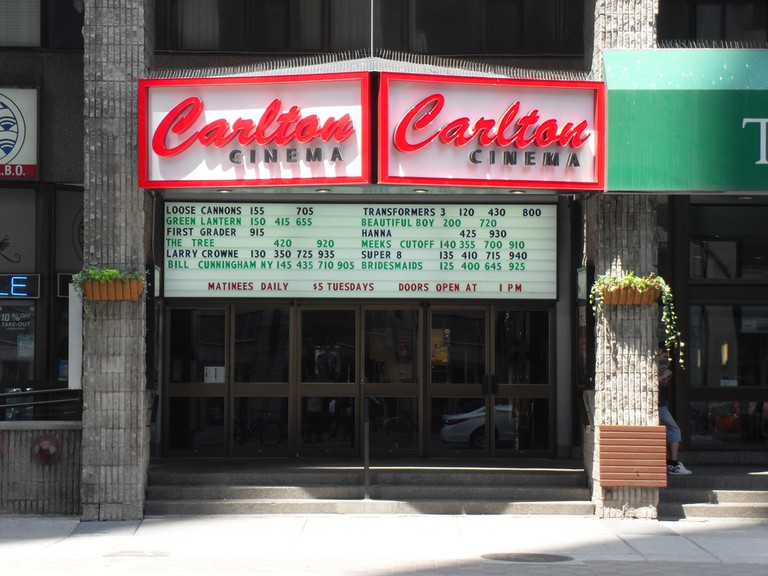 Carlton Cinemas | © William Mewes / Flickr
As part of the larger Rainbow Cinemas and Magic Lantern Theaters umbrella, Carlton Cinema isn’t officially indie, but with deals as low as $5 (on Tuesdays), it deserves an honorable mention. The collection of movies screened ranges from new(ish) releases and emotional documentaries to family films and kooky cult classics and like The Room and Labyrinth. Every second Saturday of the month, you can grab a beer from the concession stand and watch your favorite childhood flicks like An American Tail and Teen Wolf.
Open In Google Maps
20 Carlton Street, Old Toronto Toronto, Ontario, M5B 2H5, Canada
+14165985454
Give us feedback
Give us feedback