Smoque N’ Bones | Courtesy of Smoque N’ Bones
Barbecue might be best known as a Southern delicacy, but in Toronto, it’s as diverse as the residents. One of these 10 barbecue joints is sure to satisfy your meat craving.

When Tom Davis opened The Stockyards in 2009, he raised the bar for the Toronto barbecue scene. Today the joint is as busy as ever. Ribs still sell out during the early hours of dinner service when they’re offered (that’s Tuesdays, Fridays, and Sundays, for the record). Don’t leave without trying the buttermilk fried chicken; it’s a labor of love, brined and marinated for 48 hours to achieve incredible juicy flavor. The pit beans are another must-order, especially after getting the nod from Canadian barbecue queen Danielle Dimovski (a.k.a. Diva Q) as the best in North America.

With just two tables and four bar stools — eight seats altogether — Appalachia packs a lot of personality into a small space: wood paneling, country music, and a trophy skull mounted on the wall. Still, the emphasis is on meat, with a locavore-approved menu of house-smoked Ontario pork, chicken, and beef. The thick-cut brisket, served on a fluffy, golden brioche bun, is a filling lunch option. It’s served with a side of creamy coleslaw. Come after 5pm to try the applewood-smoked ribs with house-made barbecue sauce; it’s nicely balanced, with a great kick of heat. 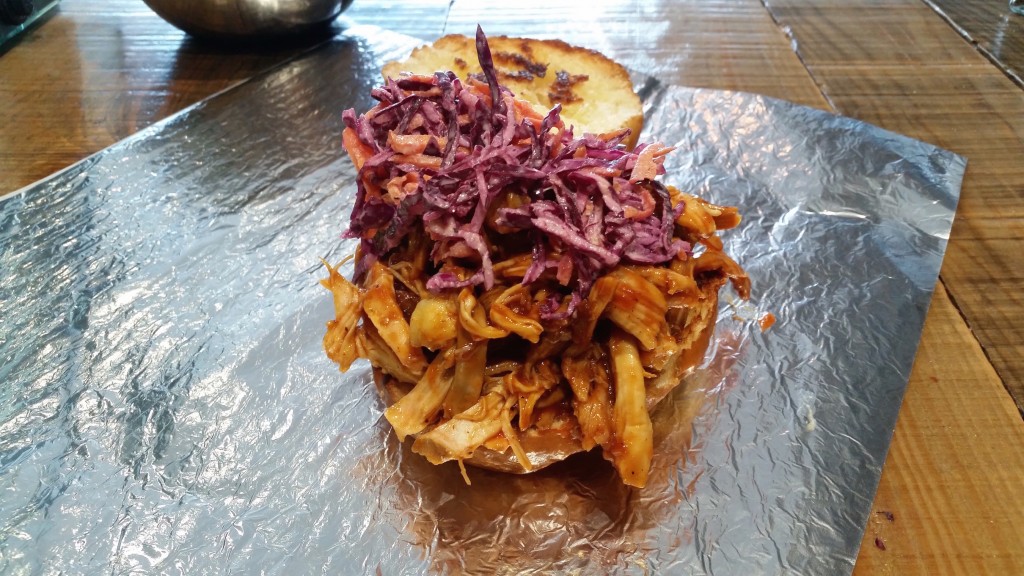 Courtesy of Appalachia Smokehouse and Barbecue

Barque Smokehouse is one of those cool neighborhood spots that makes Roncesvalles so appealing. By day, it’s a bright, casual option for a filling lunch, but by night, it’s a bustling hot spot for trendy locals. The design is industrial meets rustic, with jars of spice rub, wood paneling, and exposed concrete. It’s hard to resist the complimentary popcorn, laced with a hot and slightly sweet seasoning blend. Don’t fill up before you try the ribs, served bare but for a lip-smacking lemon and pepper rub. On their own they’re excellent; brushed with the house-made Carolina sauce, they’re extraordinary. 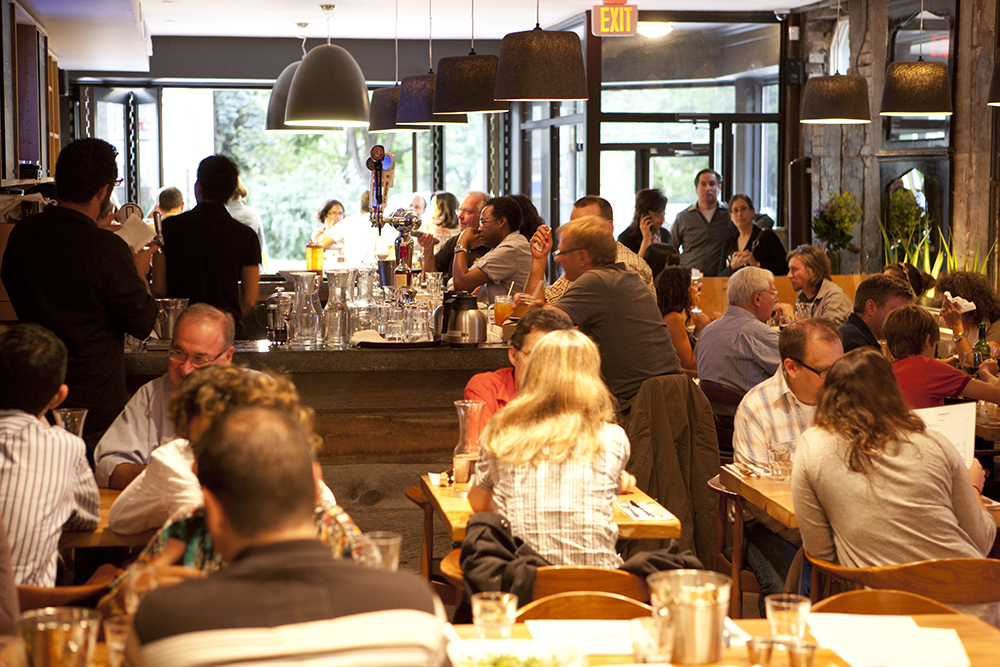 Big Crow eschews the Southern trend and takes a distinctly Canadian approach to barbecue. There’s no more authentic take on our national grilling experience than eating outdoors and wrapping up in blankets if the evening gets too chilly. That’s exactly what you’ll get on the winterized patio at Big Crow. The menu changes seasonally, but it always includes smoked and grilled options from the traditional (pulled pork, chicken wings) to the unusual (octopus, beef versht). Local beer is well represented, with staples like Beau’s Lug-Tread and Steam Whistle and some lesser-known craft brewers including Woodhouse and Sweetgrass. 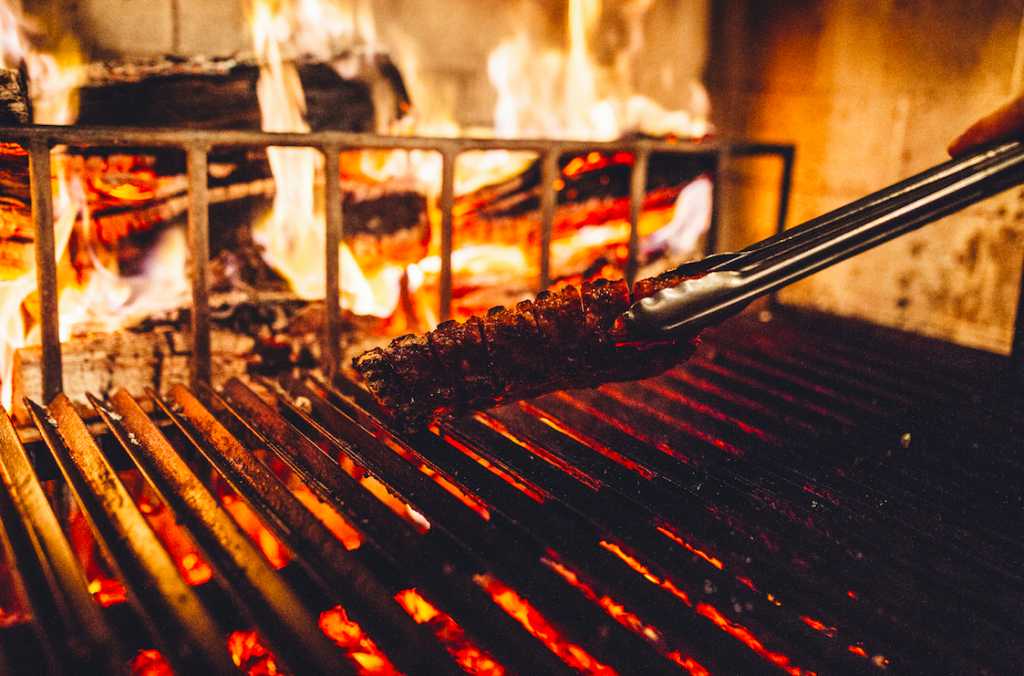 Bar, Restaurant, BBQ, Canadian, $$$
Smoque N’ Bones is located along that eclectic stretch of West Queen West near Trinity Bellwoods. Despite the abundance of great bars in the area, once you settle in, it’s hard to leave. That makes it a perfect spot to catch up with a close friend, ideally over a long dinner and a few too many drinks from the potent cocktail menu. It’s almost impossible not to over-order; it’s all just a little too tempting. Must-haves include the popcorn shrimp, which are just as salty, buttery, and hard to resist as your favorite cinema snack, and the toothsome ribs, served perfectly caramelized with sauce.
More Info
Open In Google Maps
869 Queen Street West, Old Toronto Toronto, Ontario, M6J 1G4, Canada
+16473415730
View menu
Visit website
Visit Facebook page
Send an Email
Give us feedback

Electric Mud might seem like a prime example of hipsters jumping on the bandwagon, but that doesn’t mean they’re not doing it right. With a lively rock ‘n’ roll soundtrack and a bourbon-heavy drinks list, this is exactly the kind of place that comes to mind when you think ‘barbecue joint’. The menu is a little less traditional: must-try items include the burnt rib ends (they’re more appealing than they sound). Another good pick is the aptly named crack rolls; these doughy sesame buns are served with smoked butter, and they’re a lot more addictive than cornbread. Bring a crowd to take advantage of the sharing plates and cocktail pitchers.

Pig Out BBQ is a relative newcomer to the Annex, but it’s quickly become one of the neighborhood’s most reliable takeout spots. Serving huge, reasonably priced portions, Pig Out has an obvious appeal for the U of T student crowd. The creamy mac and cheese is dangerously satisfying; it’s available as a side, but pulls double duty as a decadent topping for meatloaf and burgers. Pig Out may be tiny, but there’s often space to sit, since most customers take their barbecue to go. 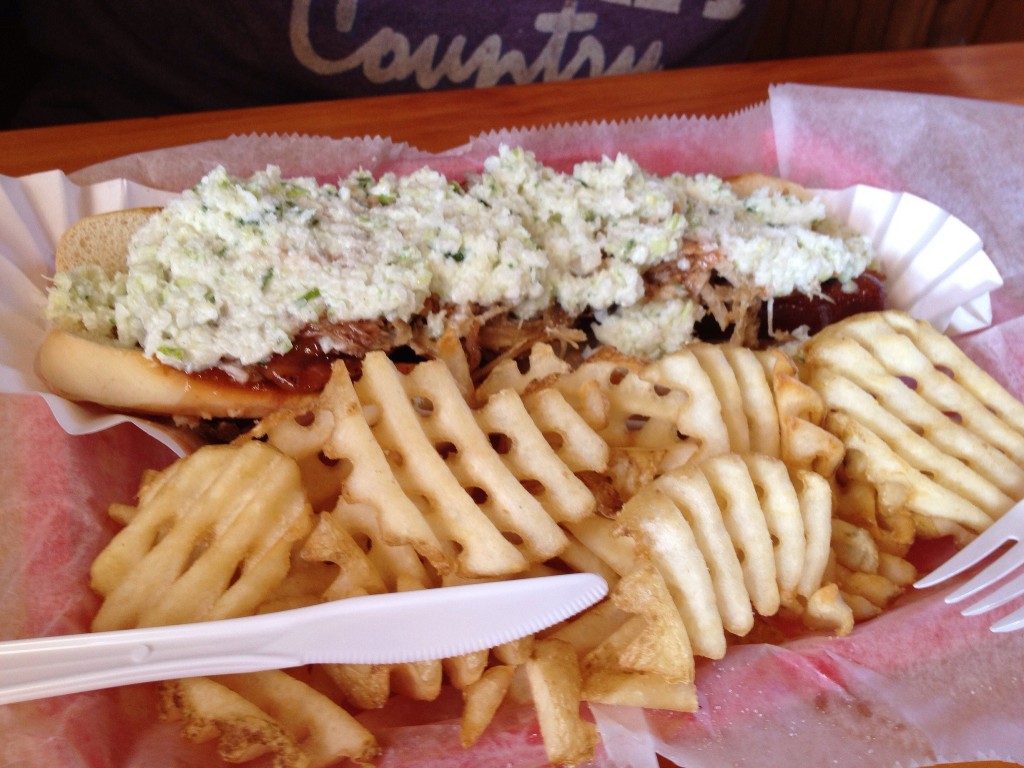 The Rooster Rotisserie and Grill

Though not a barbecue joint per se, The Rooster Rotisserie and Grill deserves its place on this list for serving some of the best grilled chicken outside of Little Portugal. Located in Bloorcourt Village, The Rooster is more neighborhood takeout spot than dining destination. Here it’s all about hot sauce, not barbecue sauce, so if you’re sensitive to spice, give the Rooster a pass. Seating is limited, but people-watching by the window makes resting your legs on a sunny day worth it.

Sunday mornings have been a lot less painful since Lou Dawg’s opened in 2009. This barbecue joint has become an essential stop for Torontonians on a night out along King West, who come in search of all things fried and filling after last call. (The King Street location stays open until 4am Thursdays through Saturdays and 11pm the rest of the week.) Whether you’re looking for something to keep you going all night or you’re just taking a pause on the way home, you can’t go wrong with the brisket sandwich. It’s a huge serving of smoky meat piled high on a dense, chewy bun. Save any leftovers for the morning after.

Restaurant, European, $$$
Don’t be thrown off by the butcher shop appearance: Royal Meats Barbeque is a meat lover’s paradise, with Balkan-style burgers and kebabs grilled to order. Pork and veal patties are served on house-made buns, while meat platters come with traditional Serbian flatbread. For the most variety, order one of the mixed grill options. This includes homemade sausage and a perfectly seasoned assortment of meats. This isn’t the cheapest barbecue joint in town, but the quality of the meat lives up to the higher prices.
More Info
Open In Google Maps
710 Kipling Avenue, Etobicoke Toronto, Ontario, M8Z 5G5, Canada
+14162511144
View menu
Visit website
Visit Facebook page
Send an Email
Give us feedback
Give us feedback