The Audience by Michael Snow | Nicole Egan
Toronto is both diverse and vibrant, with a plethora of public art providing something for everyone’s taste. Some pieces are universally loved, some scorned, and some which court controversy. This vast collection includes 200 city-owned pieces, including historical monuments, as well as works contributed by construction companies, some as a result of the City’s Percent for Public Art initiative. The initiative recommends that one per cent of gross construction costs of significant developments in the city be contributed by developers to public art. Here are ten must-see public art installations in Toronto.
Zhang Huan’s Rising Nicole Egan

University
Living Shangri-La Toronto, a hotel-condo hybrid on University Avenue just north of Adelaide, is home to the stunning, stainless steel, two-part sculpture entitled Rising, by Shanghai-based artist Zhang Huan. The sculpture, a flock of birds, is split into an exterior portion measuring 21.98m by 19.8m by 4.8m and an interior piece measuring 4.27m by 16.85m by 14.88m, extending into the lobby.
More Info
Open In Google Maps
Toronto, Canada
View menu
Visit website
Visit Facebook page
Send an Email
Give us feedback 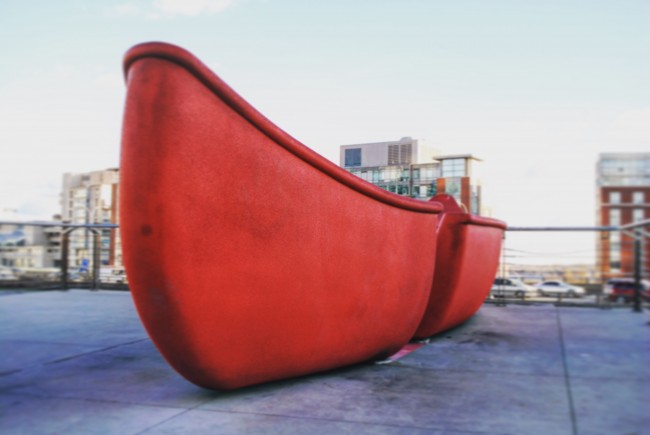 Park
Artist and author Douglas Coupland is to thank for Tom Thomson’s Canoe (more often simply referred to as the Red Canoe) located in Canoe Landing Park, near Spadina Avenue and Lake Shore Boulevard West. This privately funded, 8-acre urban park is well worth a visit for the art enthusiast. The larger-than-life canoe is big enough for people to stand in and look out over Lake Ontario (just behind the bumper-to-bumper traffic on the Gardiner). The park also houses iceberg benches and a colorful display of fishing floats in steel, resin, and LEDs, also by Coupland. Serious Coupland fans should also check out the Monument to the War of 1812, located at the corner of Fleet Street and Bathurst and unveiled in 2008. This steel-and-resin, four-meter-high sculpture takes the form of two toy soldiers, one standing and one fallen. The standing soldier, painted in gold, depicts a member of the 1813 Royal Newfoundland Regiment while the fallen soldier, painted silver, depicts an American soldier from the 16th U.S. Infantry Regiment.
More Info
Open In Google Maps
Toronto, Canada
View menu
Visit website
Visit Facebook page
Send an Email
Give us feedback

Stephen Cruise’s Uniform Measure/STACK is the thimble and colorful buttons assemblage at Richmond and Spadina. Unveiled in 1997, the work has seen some variations and controversy over the years. Local artist Victor Fraser added color and numbering to the tape measure element of the installation in 2006. Fraser’s addition remained intact for 8 years until removal by the City in November 2014. Reports at the time indicated that Cruise had complained to the City and forced the removal. Undeterred, Fraser repainted the area in May 2015, with the alphabet in place of the numbers. The City removed the piece the following November, again reportedly at the request of Cruise. 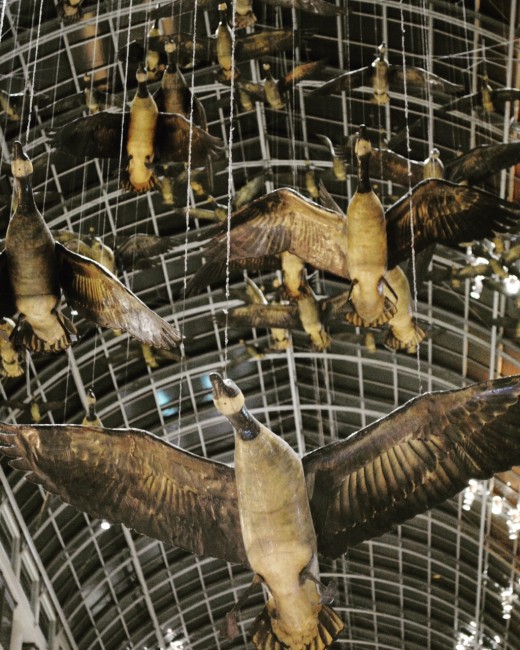 Flight Stop, a collection of 60 life-size Canadian geese in flightm was completed in 1979 and has been on display since in the atrium of the Toronto Eaton Centre, located at the Queen Street entrance. The work, hand-tinted black and white photographs on cast fiberglass forms, was created by Michael Snow and makes the list as one of the more controversial sculptures in the city. In 1981, the shopping center placed red ribbons around the necks of the geese during the holiday season and Snow brought an injunction to have them removed, successfully arguing that the ribbons distorted his work and offended its integrity. The ruling is a leading Canadian decision on moral rights ensuring an artist’s vision is respected. The precedent continues to have implications to amendments to public art. 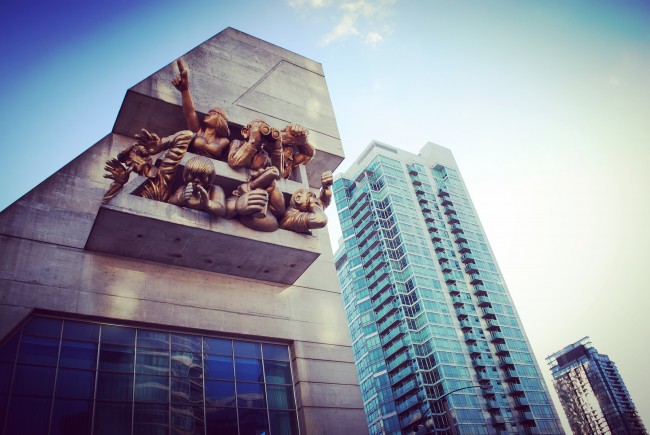 Building
Michael Snow is also responsible for The Audience sculptures unveiled in 1989 at the then-Skydome, now-Rogers Centre. The pieces, on both the northeast and northwest corners of the building above the entrances, depict larger-than-life fans and were inspired by the dynamic between fans of opposing teams.
More Info
Open In Google Maps
Toronto, Canada
View menu
Visit website
Visit Facebook page
Send an Email
Give us feedback

Toronto is a city known around the world for its multiculturalism, and the Monument to Multiculturalism at Union Station is a fitting tribute. Created by Francesco Perilli and unveiled in 1985, the sculpture depicts a man joining two of the world’s meridians, with doves holding the other meridians. Identical sculptures by the artist are located in South Africa, China, Bosnia, and Australia. 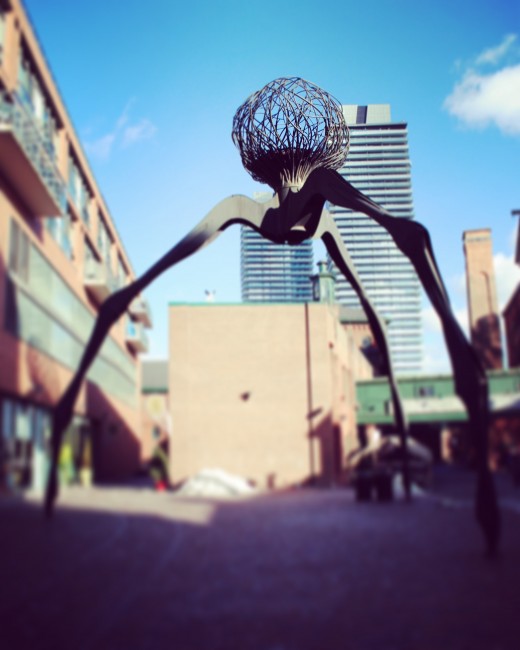 Distillery
The Distillery District is home to a number of striking public art pieces, most notably the arachnid I.T.created by Michael Christian. The historic area also boasts Still Dancingby Dennis Openheim, located in Mill Square, as well as the much photographed love lock installation unveiled in in August 2014. The nine-meter-long installation is made of steel and local reclaimed lumber and was created by the Distillery’s own Mathew Rosenblatt.
More Info
Open In Google Maps
Toronto, Canada
View menu
Visit website
Visit Facebook page
Send an Email
Give us feedback

Introduced for the 2015 Pan Am Games, the 3D Toronto sign, currently situated at Nathan Phillips Square, has become a fast favorite of locals and tourists alike. Measuring more than three meters tall by 23 meters long, with each letter weighing around 3000 pounds, the LED sign can create millions of lighting combinations. So far the lighting display has been changed six times for causes and to commemorate city and national events. 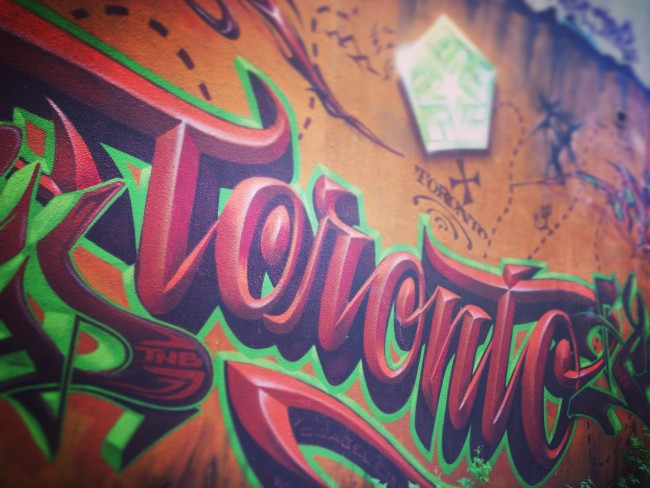 Moving onto the unofficial in our collection of public art, Graffiti Alley offers up an alternate option for unconventional public art lovers. Beginning at Spadina south of Queen West, Graffiti Alley runs all the way to Portland Street and provides visitors with plenty of variety in the murals on display. So infamous is the space that tour operators the Tour Guys now offer a Graffiti Tour of the area. 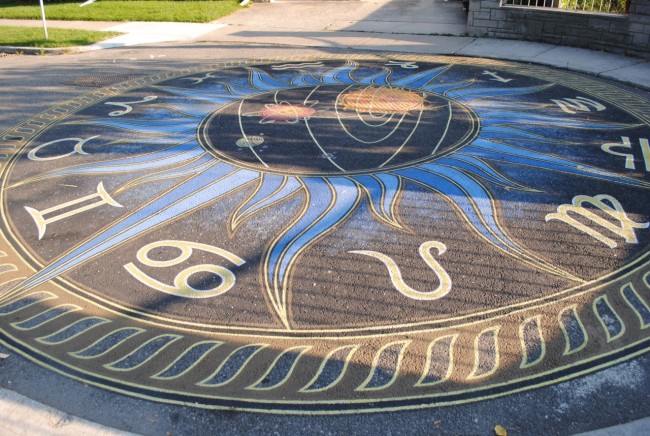 Market, Park
Another on the list of unofficial works is the beautiful Zodiac Compass at Chester Hill Lookout. The vantage point itself has been making Toronto best-of lists for years, including best make out spot, and, of course, it’s among the best skyline views of the city. Accessible from Broadview Avenue just a few blocks from Danforth, the view is especially enchanting in the evening, overlooking the Don Valley Parkway and Price Edward Viaduct, now compete with lighting in the form of the Luminous Veil. Sidewalk artist Victor Fraser has been using the space, providing free and crowdfunded art to local residents and visitors for the view for more than a decade. The current iteration is a sparkly zodiac compass, touched up as recently as September 2015. Fraser is known for his unofficial art all across the city, painting free and commercial works with the hashtag #whatsvictorupto. Other notable city pieces include the alphabet on Danforth, stretching along the north side of the sidewalk from Pape all the way to Woodbine, heart scotch at Sick Kids Hospital, and sidewalk signage for Toronto attractions, including the Toronto Island Pier, Trinity Bellwoods Park, and St Lawrence Market.
More Info
Open In Google Maps
Toronto, Canada
View menu
Visit website
Visit Facebook page
Send an Email
Give us feedback
Give us feedback