This Canadian Province Has a Strange Initiation Ceremony for Newcomers 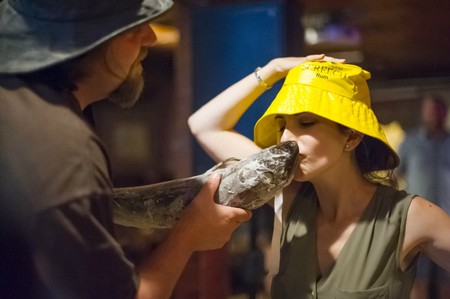 If someone said you had to eat bologna, kiss a codfish, and take a shot of rum, you’d probably think they were joking, right? It might sound crazy, but it’s no joke—every year, thousands of visitors flock to Newfoundland to do just that.

These strange rituals are part of what is known as a Screech in Ceremony, which comprises a series of tasks that non-Newfoundlanders can complete to become honorary Newfies.

The ceremony has become so popular that it even draws A-list celebrities, including Meg Ryan, Carrie Fisher, and the band Hootie and the Blowfish.

Screech In ceremonies are typically held in homes or bars and are performed by a ceremony leader. Ceremonies vary slightly, but generally involve a call and response speech, a shot of Newfoundland rum (called Screech), and kissing a frozen codfish.

The brave participants are rewarded with a certificate and serious bragging rights!