The Ultimate Guide To Korean Culture In Toronto

Mool Naengmyun | Courtesy of Cho Sun Ok
In a city as diverse as Toronto, locals and visitors are fortunate enough to explore many cultures at the same time. Korean culture is gaining pace here, from Korean shops and restaurants to entertainment culture including Korean pop music and karaoke, there’s plenty of Korean-inspired fun to be had. Toronto has two distinct Koreatowns, one along Bloor Street, from Christie to Bathurst, and another up at Finch and Yonge. Looking for a taste of Korean culture in Toronto? Here is our guide

Pub, Korean, Asian, $$$
Soju Time! | © Graham Hills / Flickr
Since the drinking culture in Korea is huge, pubs are always brimming with sounds of laughter and revelry, and Miss Korea is one of the most popular Korean pubs in Toronto. Just like a pub in Korea it has a private karaoke room. It is a great place to try Soju (hard liquor made from rice, wheat, or barley) one of the most popular drinks in Korea. Try Miss Korea’s spicy rice cake with pork belly (alongside your soju) and you won’t be disappointed.
More Info
Open In Google Maps
687 Yonge Street, Old Toronto Toronto, Ontario, M4Y 2B2, Canada
+16477489100
View menu
Visit website
Visit Facebook page
Send an Email
Give us feedback

The Asian-style bakeries in Toronto are usually Hong-Kong style, it’s harder to come by Korean bakeries, so it’s definitely worth trying Hodo Kwaja. Their specialty item is the walnut cake, referred to as hodukwaja in Korean. This sweet yet savory cake has a long history in Korean culture and originated in Cheonan. There are many varieties available, but make sure to try the red bean walnut cakes, which is how walnut cakes are traditionally prepared. Korean walnut cakes are baked in a cute bite-size shape of a walnut, and upon biting into it, you’ll find a soft sweet red bean paste with pieces of walnut.

Pub, Korean, Asian, $$$
Korean Fried Chicken | © insatiablemunch / Flickr
Korean-style fried chicken is one of the most common foods in Korea. Often shared between friends or coworkers at a pub along with shots of soju, Toronto’s The Fry is here to meet all your fried needs. Fried chicken from Korea is different from its Western counterparts, it uses more spices and herbs, it’s lighter on the batter,and it’s actually deep fried twice, which creates more crisp with less grease. If you order the ‘Fried Chicken in Spicy Sauce,’ you can taste the renowned Korean chili sauce known as ‘gochujang,’ which is made from fermented soybeans and chili peppers, rice, and salt, creating a savory, spicy flavor that is distinct to Korean cuisine.
More Info
Open In Google Maps
524 Bloor Street West, Old Toronto Toronto, Ontario, M5S 1Y3, Canada
+16473520999
View menu
Visit website
Visit Facebook page
Send an Email
Give us feedback

Cafe, Coffee, Tea , $$$
Cafés are the ideal spot for intimate conversation, and blind dates are very common in Korean cafés. Café Princess’ desserts are pretty darn cute, with choices like the ‘Princess Moffle’ (waffle made from rice cake) and chocolate fruit fondue. The interior of the cafe is homey, with light pastel colors. Seating for two is located near the window and has a great view. You’ll also find couches with low tea tables which encourage intimate conversation and are perfect for groups or dates. For a fee, basic board games like Jenga, Game of Life, or a deck of cards are available.
More Info
Open In Google Maps
5590 Yonge Street, North York Toronto, Ontario, M2N 7L3, Canada
+14167339600
View menu
Visit website
Visit Facebook page
Send an Email
Give us feedback

Grocery Store, Korean
Pocky - Super H Mart | © Wes Bryant / Flickr
Korean produce can be difficult to find in regular supermarkets, but Galleria has the largest stock in any grocery store. From freshly-packaged kimchi to trendy Korean instant noodles, Galleria has it all. In Korean restaurants, side-dishes include pickled bean sprouts, kimchi, honey-glazed potato, and fish cake. Making these at home can be a daunting task, but luckily, Galleria makes fresh side dishes daily. Trying snacks from other countries is always an adventurous experience, especially when neither you nor your friends know what the packaging says, and Galleria has a whole aisle dedicated to snacks and treats, so go nuts.
More Info
Open In Google Maps
7040 Yonge Street, Thornhill, Vaughan, Ontario, L4J 1V7, Canada
+19058820040
View menu
Visit website
Visit Facebook page
Send an Email
Give us feedback

Restaurant, Asian, Korean, $$$
Korean barbecue is well-known in Western culture, but Toronto’s Korean barbecue places aren’t always authentically Korean in taste. Piggy’s Restaurant is authentically Korean, and you can tell by the flavor. One type of Korean barbeque is called samgyeopsal, which roughly translates to pork belly barbecue. The meat is marinated and cut into thin slices ready for barbecuing. Eating this is an experience like no other, the meat is dipped in savory sauce and wrapped in a lettuce leaf with carrots and onion strips. This creates a flavorful contrast, from the smoky barbecued pork belly to the cool and crisp veggies. If you have never tried authentic Korean barbecue, head to Piggy’s Restaurant with some friends and get cooking.
More Info
Open In Google Maps
#27, 5 Glen Cameron Road, Thornhill, Markham, Ontario, L3T 5W2, Canada
+19055971522
View menu
Visit website
Visit Facebook page
Send an Email
Give us feedback

Among Korean noodle dishes, naengmyun is one of the most popular. It is a cold noodle dish and contains glass noodles, pear slices, boiled egg, and strips of pickled radish in beef broth. This is a long-cherished dish in Korea and has existed for centuries. Cho Sun Ok is well-known for their cold noodle dishes, and while it’s a bit of a trek, it’s totally worth the trip to Markham. Try the Mool Naengmyun with arrowroot noodles and homemade red pepper sauce. 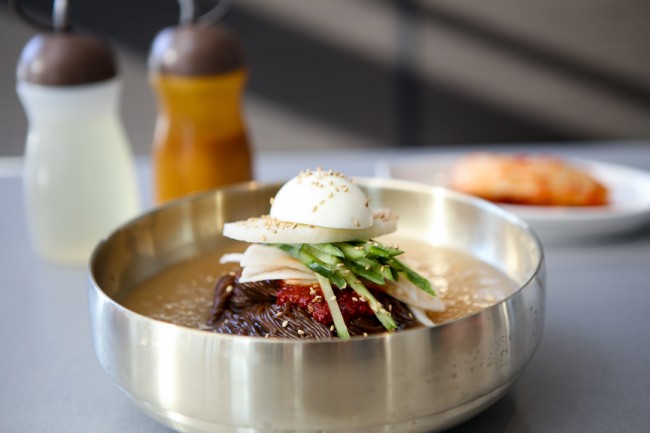 Buk Chang Dong, located in downtown Koreatown near Christie, is well known for its soon dubu (soft tofu). Serving up Korean-style hotpot dishes, Buk Chang Dong incorporates tofu as the main ingredient. Often, soon dubu is a spicy dish prepared in a hotpot with soup, veggies, and an egg, and there are variations such as Kimchi soon tofu and dumpling soon tofu. Most of these hotpot dishes come with specially prepared multigrain Korean rice called japgokbap, which is purple in color. The rice comes in a hot stone bowl, which lightly bakes the rice until it becomes slightly crispy. 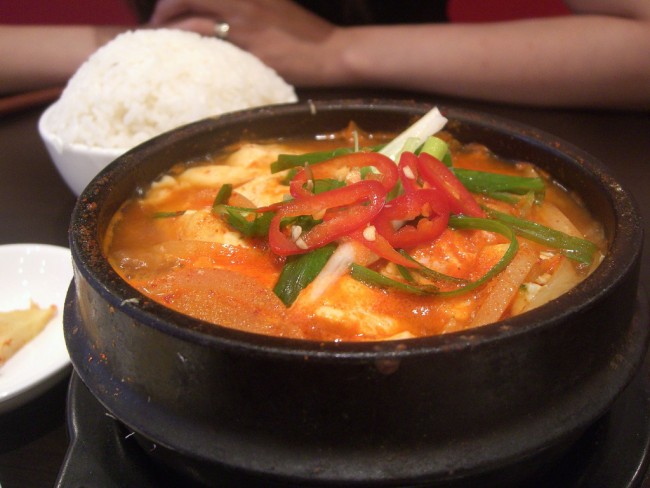 After filling up on authentic Korean food, the best thing to do afterwards is to go for karaoke. In Koreatown, it’s guaranteed you’ll find a karaoke room nearby. The culture of norebang (song room in Korean) is a favorite pastime after a night of libations. Enjoying a great night out with friends and going to a karaoke room is the perfect Korean way to finish a night out.