The Perfect Walking Guide to Toronto 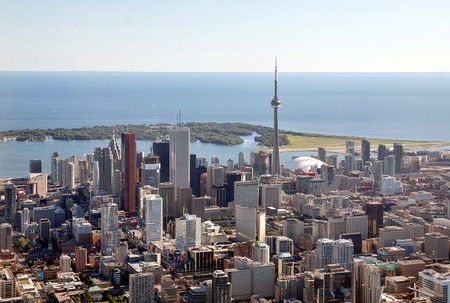 As the weather warms up and the days get longer, beaches and patios finally open, and the atmosphere in Toronto settles into a more relaxed pace. It’s the perfect time to explore the city on foot, experiencing its diversity firsthand rather than through a streetcar window. Here is a mini walking guide for the city so that you can be sure to see some of its best sites while strolling with gelato in hand.

Start out the walking tour right in the thick of it – in Toronto’s busiest square and what is considered to be the heart of the downtown area. Depending on the time, Yonge-Dundas Square is bound to be crawling with morning commuters, last-minute Christmas shoppers, or late-night partiers on their way to the nearby Entertainment District. In the summer months, free concerts, festivals, and events take place at the square, and on Tuesday evenings from June to August, free film screenings play as the sun goes down. 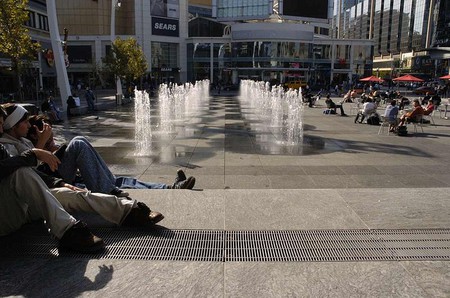 B. The Eaton Centre

Located right off Yonge-Dundas Square, the Toronto Eaton Centre is one of the most popular tourist attractions in the city. A long-standing feature of Toronto’s retail history, the Eaton Centre is home to over 250 retailers. Walk through the bustling mall to get a sense of the huge size of the place, and then grab a bite to eat or something refreshing to drink in the Urban Eatery along the way. 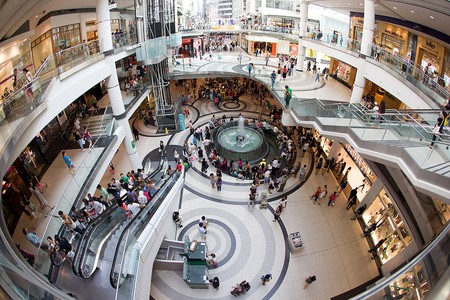 Heading out of the Eaton Centre through the Queen Street exit, hang a right and head over to Nathan Phillips Square, just a few blocks from the mall. Passing the beautiful and Romanesque Old City Hall, you’ll reach the square in time to see the fountains spraying. In the winter, the reflecting pool becomes a popular skating rink, and in the warmer months, the area becomes a site for concerts, art displays, a weekly farmers’ market, civic gatherings, and other public events. Studies show that approximately 1.5 million people visit this urban plaza each year. 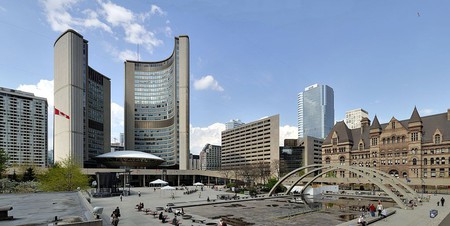 From Nathan Phillips Square, go due south along Bay Street, which will give you a sense of the city’s business area, sometimes referred to as Old Toronto. Cross Queen and King Streets, two of the city’s major east-west arteries, and when you reach Front Street, pause to look at the ritzy Fairmont Royal York Hotel, which was the tallest building in Toronto when it opened in 1929, with its 28 floors. The hotel has been the residence of choice for Queen Elizabeth II and other members of the Royal Family when in Toronto. Continuing south, you’ll also pass the Air Canada Centre, the site for the home games of many of Toronto’s pro sports teams, including the Raptors and the Maple Leafs.

Finally, you’ll reach the Harbourfront Centre. Situated right along the shores of Lake Ontario, Harbourfront is a hub for leisure and entertainment in the summer sun. Stop for an ice cream and stroll west along the docks while looking out across the water at the lovely view of the Toronto Islands. 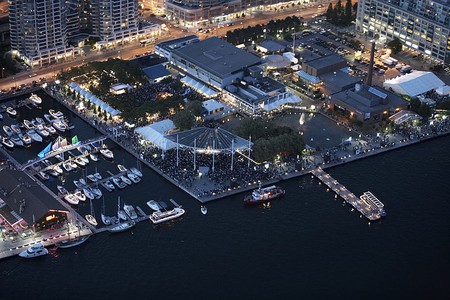 Now that you’ve relaxed for a bit, you can head north again along Spadina Avenue. You’re going to pass the Rogers Centre along the way, which is a multi-purpose stadium that is best known as the home of the Toronto Blue Jays – Canada’s only Major League Baseball team. Originally named the SkyDome – and still affectionately called that by some Torontonians – it sits right beneath the CN Tower, so take a good look at this quintessentially Toronto scene before you move along again. 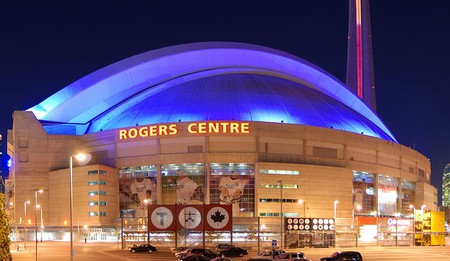 Continuing north on Spadina, you’re going to pass through Toronto’s Fashion District, which originated as the hub of textile manufacturing in the city in the early 20th century. Today, many of the old garment factories and warehouses, now renovated, are home to art studios and galleries, publishers, software and tech design offices, and condos and lofts.

Note the contrast as you keep going north and, after crossing Queen Street, find yourselves in Chinatown. Suddenly, there are busy markets, shops, and restaurants lining the street, and the choices are overwhelming! It’s one of North America’s largest Chinatowns, and it’s a must-see while in Toronto. Once you’ve had your fill of the sights and smells, make a slight dip to the west via Baldwin Street. 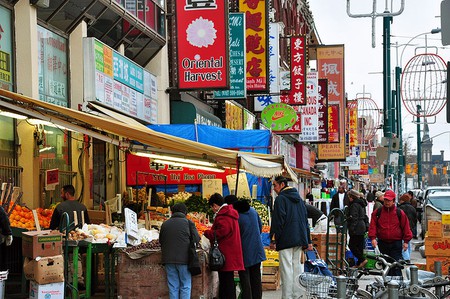 Ah, Kensington. One of the city’s most iconic neighborhoods – and long considered one of the hippest – take your time walking through this area. There’s a range of eclectic vintage shops and health food stores, cafés, Latin markets, specialty meat and cheese shops, bakeries, and more. On Sundays, the streets of Kensington Market are designated a “no car zone,” so that might be the best time to come and explore and take photos of the neighborhood’s quirky style. Also, take a snack break at Wanda’s Pie in the Sky, a bakery with must-try desserts. 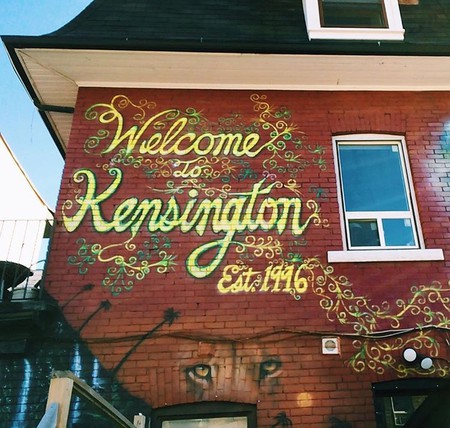 I. The University of Toronto, St George Campus & Queen’s Park

Now that you’ve seen Kensington and refueled with dessert, you’re going to keep walking north toward Bloor Street. Heading off the beaten path, you’re going to cut through the University of Toronto’s large and park-like downtown campus. The campus has many beautiful and historic buildings scattered throughout, and the green space is a welcome respite from the bustling areas that you’ve seen so far. From here, you’ll also be able to see Queen’s Park, Ontario’s provincial government buildings. 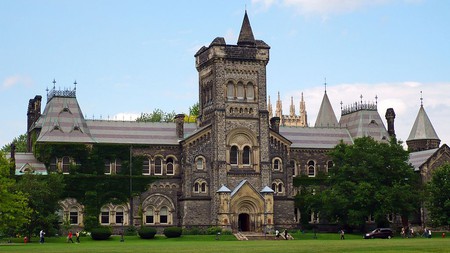 University College at the University of Toronto | © Nat /WikiCommons

Situated on Bloor Street right at the edge of UofT is the Royal Ontario Museum, where this tour ends. No doubt you’re exhausted after this long day of walking through the city! Whether or not you choose to head inside the ROM to visit its innovative exhibits, the striking and unusual architecture of the building is worth gawking at from the outside. Some people love it, while others hate it, but it’s undeniably memorable. From here, you can head west into the Annex or east into Yorkville – there’s still plenty to see! But if you need a place to finally rest your weary feet, you can walk two minutes north to The Bedford Academy, a popular casual gastropub set in a converted mansion. 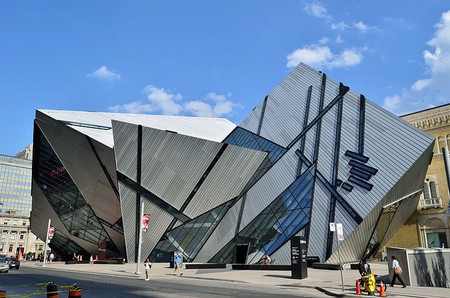 If you’re interested in taking a real walking tour of the city, check out Muddy York Tours, which, since 1997, has offered themed excursions like the “Haunted Streets of Downtown Toronto” and “Toronto Noir: Gangsters and Gallows Tour,” as well as history, architecture, and nature tours. The Royal Ontario Museum (ROM) also offers ROMWalks, which usually offer in-depth circuits of specific neighborhoods in the downtown area.