The Most Beautiful Places to Enjoy the Canadian Rockies

Spirit Island at Maligne Lake | © Elena Suvorova / Shutterstock
The UNESCO World Heritage-listed Canadian Rockies stretch for 180,000 square kilometers (69,498 square miles) through British Columbia and Alberta. The region brings in millions of visitors from around the world every year, due to its picturesque views at every turn. Here are some of the most beautiful places to visit in the Canadian Rockies.

Yes, one of the best places to experience the Canadian Rockies is along a highway. The Icefields Parkway stretches 232 kilometers (144 miles) and connects Banff and Jasper National Parks. National Geographic has called it one of the world’s most spectacular driving tours, as people can’t help but pull over frequently and explore the many pristine lakes, glaciers, wildlife sightings, and valleys along the way. Recommended stops include Peyto Lake and Athabasca Falls. 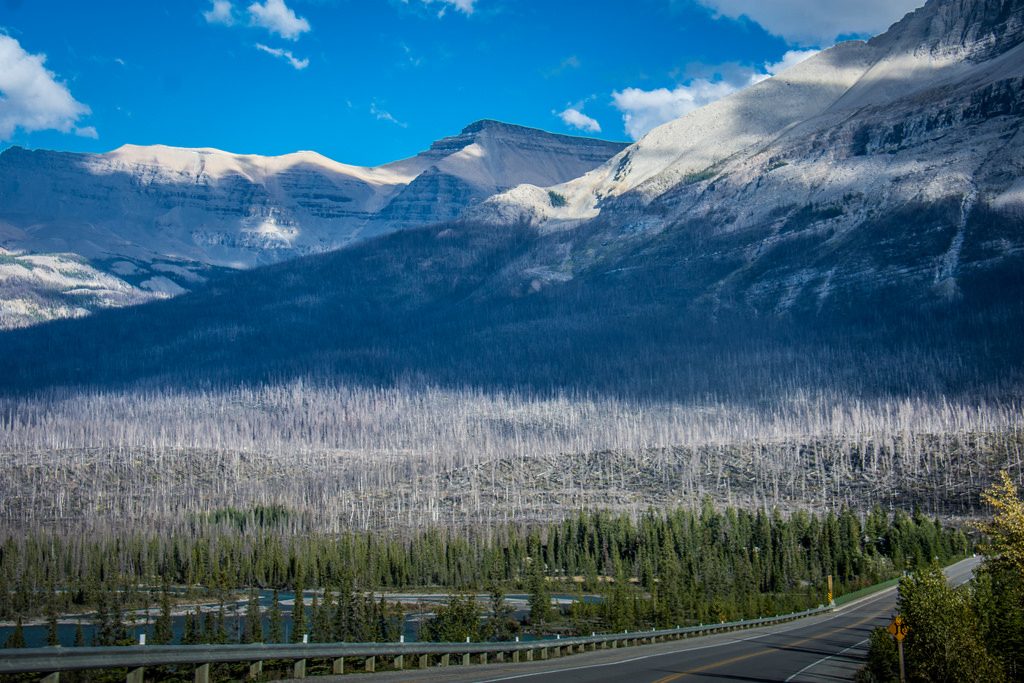 Horseshoe Lake is a horseshoe-shaped swimming hole within Jasper National Park. Known for its rugged high cliffs, which are popular for cliff diving, the lake is a brief 1.5-kilometer (0.9-mile) loop away from its trailhead off the Icefields Parkway. 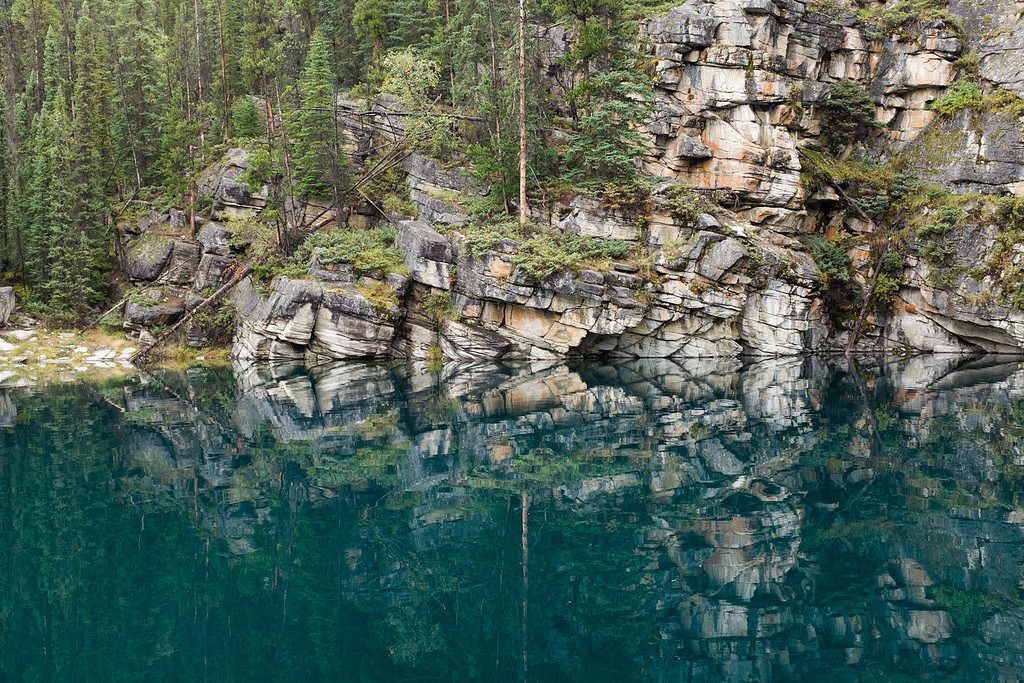 The Columbia Icefield is actually the largest of its kind in the entire Rocky Mountain region of North America. It sits on the Continental Divide between British Columbia and Alberta, as well as in both Banff and Jasper National Parks. There are six major glaciers within the Icefield, but there are daily tours to explore and walk on Athabasca Glacier. Another way to enjoy the view is to take a walk out onto the Glacier Skywalk, which drops 280 meters (918 feet). 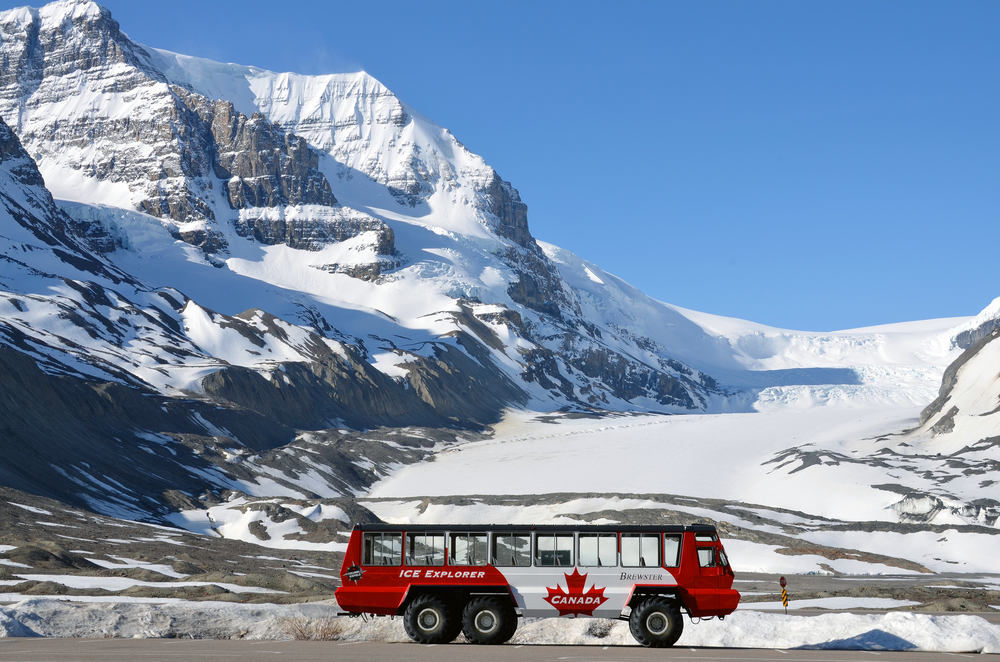 Peyto Lake might win the prize for the most beautiful, brightly colored lake within the Canadian Rockies. Named after Bill Peyto, who was a trail guide and trapper in Banff, the lake sits in a valley and is best viewed from Bow Summit, which happens to be the Icefield Parkway’s highest point. Summer is the best time to visit and see Peyto Lake at its brightest, thanks to the light-reflecting glacial rock flour flowing in from Peyto Glacier. 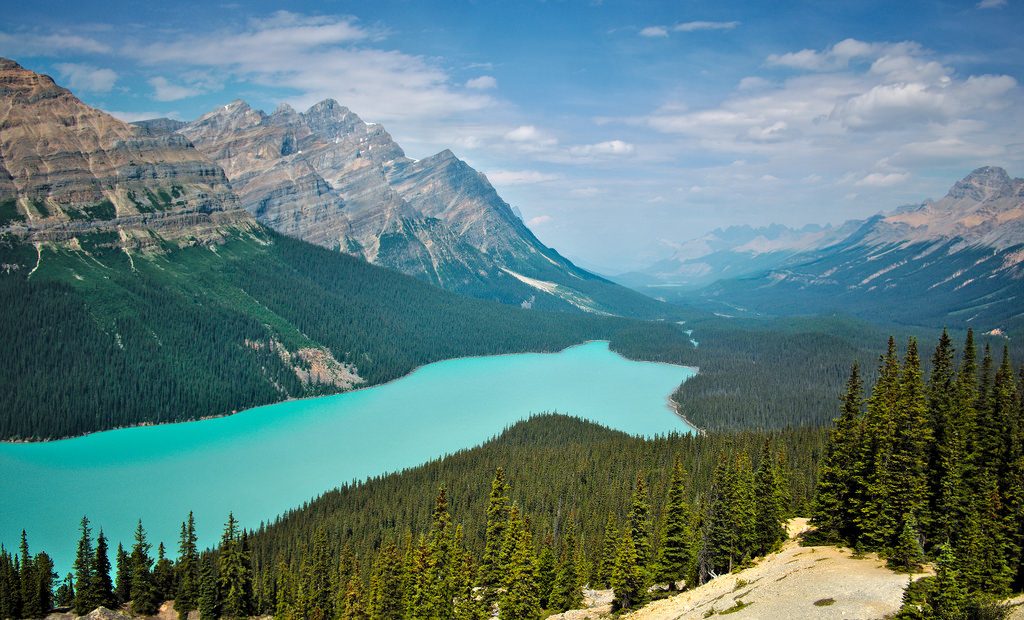 Canmore might not get as much attention as Banff, but it still has the same amazing scenery. Located in Banff National Park, it’s an ideal place to base yourself to enjoy the Canadian Rockies and the beautiful Three Sisters Mountain Range, both of which surround the township. Canmore is an adventurer’s paradise, with its Nordic Centre, hiking trails, and access to lakes such as Quarry Lake and Upper and Lower Kananaskis Lakes. 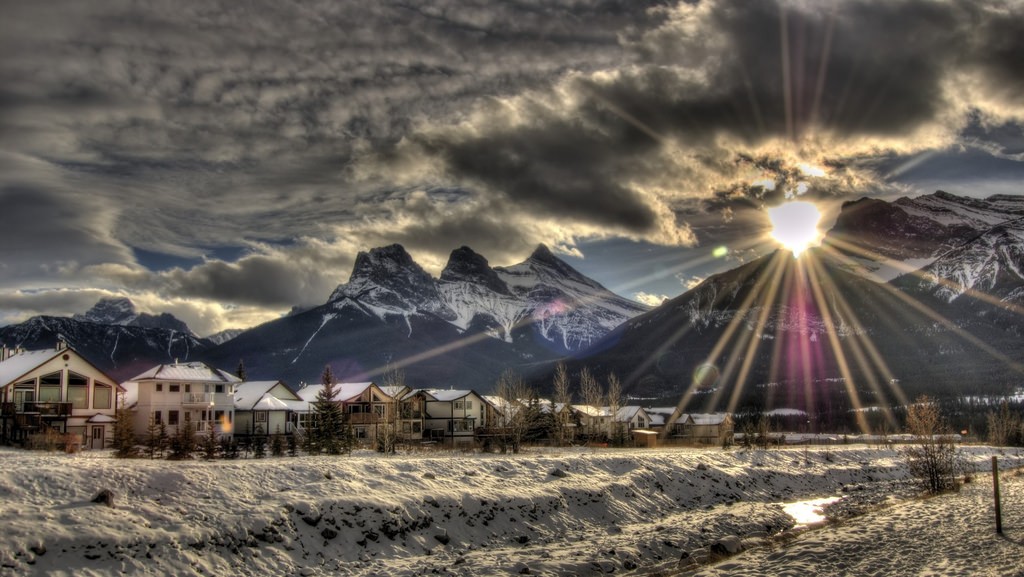 Natural Feature
Spirit Island at Maligne Lake | © Elena Suvorova / Shutterstock
Maligne Lake is beautiful for a number of reasons, including its surrounding Rocky peaks, its three visible glaciers, summertime boat cruises, access to the Skyline Trail, and Spirit Island. Reader’s Digestsubscribers said the lake has the Best Boat Cruise in Canada, and it isn’t hard to see why. The Skyline Trail is Jasper’s most popular multi-day hike, which begins at Maligne Lake.
More Info
Open In Google Maps
Alberta, Canada
View menu
Visit website
Visit Facebook page
Send an Email
Give us feedback

One of the most scenic hotels in the Canadian Rockies is undoubtedly the Fairmont Banff Springs Hotel. It resembles a European castle, perched high on a hill overlooking the township and surrounded by mountains. The hotel has a golf course, relaxing spa, several restaurants, and it’s within walking distance of Banff and the Bow River. It’s a beautiful place to stay and enjoy the Rockies.

Natural Feature, Park
Lake Louise in Banff National Park | © Ilya Katsnelson / Flickr
Lake Louise is both the name of a town and the most popular lake in the Canadian Rockies. The best part of the glacier-fed Lake Louise is that it’s beautiful no matter what time of year you visit. In winter, the lake freezes over and becomes home to a winter wonderland, plus there’s the nearby Lake Louise Ski Resort. In summer, the lake is a turquoise masterpiece and adventure playground for hikers and kayakers. But the beauty doesn’t stop there. Nearby is Moraine Lake, which competes with Lake Louise for the title of the most gorgeous lake.
More Info
Open In Google Maps
Alberta, T0L, Canada
+14037621550
View menu
Visit website
Visit Facebook page
Send an Email
Give us feedback

Park, Natural Feature
Waterton National Park | © Lee Coursey / Flickr
Located in the southwest corner of Alberta and straddling the United States border, Waterton Lakes National Park is quite uncrowded compared to its northern counterparts. But it is just as beautiful and is part of the Waterton-Glacier International Peace Park, the only park in the world that is a UNESCO World Heritage Site. Fun activities include visiting Red Rock Canyon, hiking to the top of Bear’s Hump and Crypt Lake, and taking an International Boat Cruise to Goat Haunt, Montana.
More Info
Open In Google Maps
Alberta 5, Waterton Park, Alberta, T0K 2M0, Canada
+14038595133
View menu
Visit website
Visit Facebook page
Send an Email
Give us feedback
Give us feedback