The History Of The Gooderham Building In 1 Minute 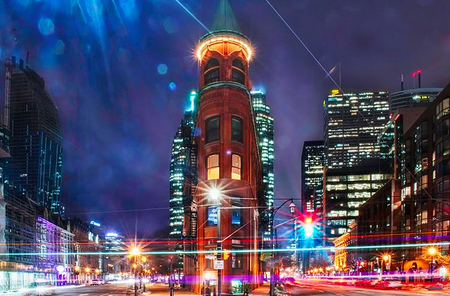 Commonly referred to as ‘Toronto’s Flat Iron’, the Gooderham Building is an iconic and historic structure situated at the intersection of Wellington and Front Street in the heart of downtown Toronto. Associated with the famous Gooderham family and their distillery, this building’s history, like the family, dates back to the 19th century.

Designed by Toronto architect David Roberts Jr., the building, a triangular-shaped structure, was designed to follow the layout of the streets, which formed a point with the merging of Wellington and Front Street. While Wellington Street follows the Town of York grid, Front Street’s diagonal line is attributed to the 19th-century waterfront. The building, an example of Romanesque Revival and French Gothic architecture, finally finished construction in 1892, taking the place of the Coffin Block Building, which sat on the same site before construction began on the Gooderham in 1891. 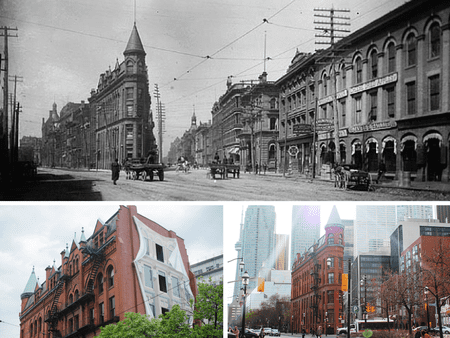 Set on a high foundation, the Gooderham is four-and-a-half stories tall, with a copper roof and arched windows. In 1975, the building was designated as a historic site and has continued to be restored and preserved since. In 1980, the famous mural was painted on the backside of the building using a trompe l’oeil effect – an illusion that the painting’s edges are ‘fluttering’ away. Created by Canadian artist Derek Besant, The Flatiron Mural is the artist’s representation of the Perkins Building across the street.