The History Of The Distillery District In 1 Minute

The Distillery District, Toronto’s historic cobble-stoned and pedestrian-only village, plays host to a number of events, boasts over 80 shops and boutiques as well as restaurants and cafés. This area, while a hot spot for locals and tourists alike, has a rich history rooted deep in the beginning of Toronto’s timeline.

The story of The Distillery District begins in 1831 when James Worts came to Canada and opened a mill for grinding grain with his brother-in-law, William Gooderham, along with their families. Two years later, Worts’ wife died during childbirth, and he ended his life. However, Gooderham continued with the business, partnering with Worts’ eldest son.

In 1837, in response to the increase in harvest grain from Upper Canada farms, Gooderham added a distillery to the mill, producing his first spirit – whiskey. By the 1850s, the Gooderham and Worts distillery was fully functioning – and thriving to say the least – including a wharf, storage facilities, an icehouse, cooper shop for barrel-making and a dairy in addition to the already operating distillery and flour mills. In 1859, Gooderham opened a new distillery on Mill Street, which is said to be the most important contribution to Toronto’s manufacturing business; although a fire destroyed parts of the main building in 1869, forcing Gooderham to reconstruct the building, his business continued to thrive. 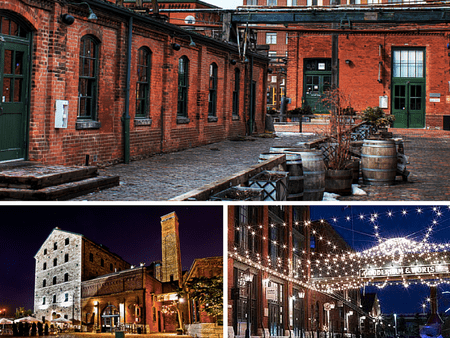 In 1871, Gooderham and Worts became one of the largest exporters in spirit production, shipping millions of gallons across Canada as well as North and South America – and at one point was the largest distillery in the world. After the death of Gooderham and Worts’ son, Gooderham’s son inherited the business; however, between 1914 and 1920, WWI and Prohibition brought spirit production to a standstill. In 1923, he was forced to sell the declining business to Harry C. Hatch, who merged with Hiram Walker & Sons Ltd., renaming the business Hiram Walker-Gooderham & Worts Ltd. in 1927. With a new focus on the production of Canadian Club whiskey, operations moved to Windsor, officially ending the production of rye whiskey at Gooderham & Worts in 1957 – although rum production continued until the distillery officially closed its doors in 1990, after 153 years of production.

In the 1990s, The Distillery District was granted new life as it became a popular destination for film – it was the number one film location in Canada and the second outside of Hollywood, with over 1700 movies filmed here. The Distillery – purchased by Cityscape Holdings in 2001 – underwent a huge project to restore the district in order to turn it into a car-free neighbourhood that would preserve its heritage, ‘entirely dedicated to arts, culture and entertainment.’ It finally opened in May 2003 and is now one of Canada’s top tourist attractions as well as a unique neighbourhood that is a vital part of the city of Toronto.