The History Of Toronto's CN Tower In 1 Minute 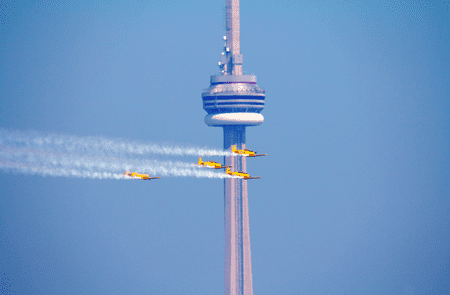 Toronto’s most iconic and recognizable building, the CN Tower, marks the city’s skyline at a whopping 553 meters high, a notable structure that can be found in almost every photo of the city. The tower that was the world’s tallest free-standing structure — a title held for over 34 years, but surpassed by the Burj Khalifa in Dubai in 2007 — and the engineering wonder of the world, is now the city’s most known building with a history that details the long and complex construction.

The CN Tower was built in 1976 by architects John Andrews and Roger Du Toit, and structural engineer, R.R. Nicolet with the help of the Webb Zerafa Menkès Housden Partnership. The purpose of the structure was to show off the strength of Canada’s architectural and engineering industries by constructing the largest tower in the world. The project took over 40 months to complete with 1,537 people working 24 hours per day, five days a week, costing $52 million. Digging and construction of the foundation started in February 6, 1973; once this was prepped, work began on the tower’s shaft. This 335-meter-long structure contained a hexagon-shaped core and three arms for support that acted as a mold for the concrete. With the completion of the tower’s shaft, this made the building the tallest in Canada. But there was more to come.

With the most important part of the building in place, construction on the sphere, which would hold the restaurant and observation decks, commenced in August 1974. Subsequently, the tower went into its final stages of construction, bringing in the famous helicopter, ‘Olga’, which helped in placing the 102-meter-long steel antenna on top, a process that required the assembly of 44 different pieces.

On April 2, 1975, the CN Tower was finally complete, opening its doors to the public on June 26, 1975. The tower was named the ‘World’s Tallest Free-Standing Structure’ shortly after, in addition to other notable rankings, like the world’s highest wine cellar and one of the Seven Wonders of the Modern World (1995; American Society of Civil Engineers), bringing it on par with other big names, like NYC’s Empire State Building and San Francisco’s Golden Gate Bridge. 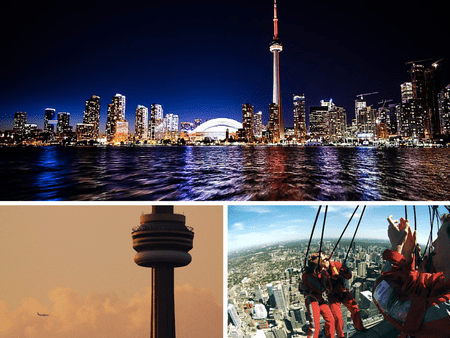 Today, the CN Tower attracts over two million visitors a year — some to ride the glass elevators to the ‘SkyPod’ (the highest point in the sphere) for a breathtaking view of the city, others to dine in the revolving restaurant, shop, attend the theater or take part in the EdgeWalk, where visitors are suspended along the outside of the observation center, allowing them to circumnavigate the tower high above the city.