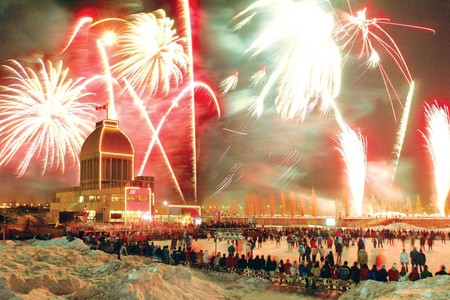 The buzz on New Year’s Eve in Canada is amazing, and it’s one of the best places to be. From the east coast to the west, there’s so much happening on December 31, 2017, and the fun doesn’t have to stop with your celebrations. On New Year’s Day, you’ll be in a picture-perfect winter wonderland with so many different activities to indulge in no matter where you are in Canada.

Ring in 2018 with all the glamour. Gladstone Hotel is bringing back the glamorous glory days of disco and Studio 54 with an epic New Year’s Eve dance party at Studio 1214. The historic hotel will turn into an opulent and champagne-fueled glittering extravaganza full of pop art, dancing, and queens. If you’re in the mood for fireworks, ice skating, and some good old family fun, there are outdoor countdown parties at Nathan Phillips Square and Harbourfront Centre.

For New Year’s Eve, Niagara Falls hosts a free party in Queen Victoria Park, complete with fireworks exploding over the rushing gorge at 9 pm—these fireworks actually take place weekly during the holiday season. This year, the fun kicks off at 8 pm and features music from renowned artists and bands. Canada’s natural wonder is stunning all year during the day, but once night falls, the flowing waters are set ablaze with ambient-colored lights. From November 18th until January 31st, you can catch the holiday edition of Niagara Falls at night, with the Winter Festival of Lights. The landmark is transformed with millions of sparkling lights and illuminated displays throughout Niagara Parks. 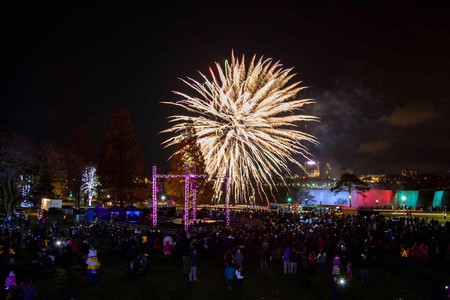 Ring in 2018 at Canada’s largest New Year’s Eve party in Coal Harbour. Concord’s NYE celebration brings in the crowds for an epic night of fireworks, concerts, food trucks, and entertainment. The festivities start off early in the evening and run until just after midnight. Last year, the event was a huge success, and this year, it promises to be even bigger and better. As well as the free outdoor celebration, there are various ticketed options with special features. Due to the large crowds, it’s best to leave the car at home and use public transport, which was free last year from 5 pm onwards. 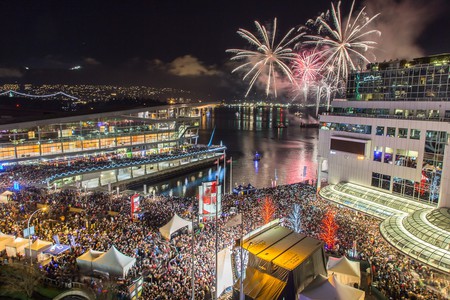 Join the Scottish Society of Ottawa for their Hogman-eh! festival at Lansdowne’s Aberdeen Pavilion. At Hogman-eh!, you can ring in the New Year at a free family-friendly celebration with some Highland flair. Now in its 6th year, this annual tradition features Scottish musical entertainment; you can also sample Scotch and enjoy Scottish food and drink. The little ones will love the children’s activities, and they even get an earlier countdown at 7 pm. Cap off your night with a bout of Highland and Scottish dancing, singing “Auld Lang Syne” and watching fireworks at midnight. 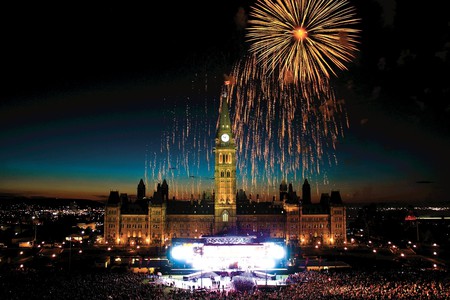 There’s a bunch of great events happening on December 31st in Halifax. The free outdoor party at Grand Parade has one of the largest fireworks shows in Canada. Or there’s the New Year’s Eve Dinner & Dance at Hatfield Farms; festivities include sleigh rides, a rubber rodeo, and outdoor campfires. If you want to laugh your way into 2018, Yuk Yuk Comedy Club offers a dinner-comedy show with a champagne toast.

If you want to party in style, then you’ve come to the right place. Canada’s wildest party at Montréal’s L’Olympia is world-famous and pulls in at least 2,500 people who want to eat, drink, and dance their way into 2018. For something a little more under the radar but just as happening, check out the parties at Roxbury, Rouge Nightclub, and La Boom. If you don’t fancy being in a club, then head to the city’s picturesque Old Port. There are plenty of fun adventures, such as ice skating, fireworks, live performances, and an outdoor party that goes on past midnight. 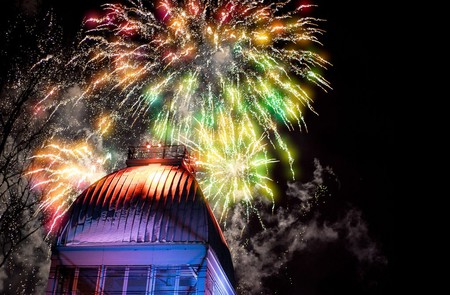 Quebec’s delightful charm lends itself so easily to the holiday season, and their end-of-the-year celebrations are particularly festive. As well as an outdoor party with large-scale fireworks at Grand Allée, where you can dance the night way, in the Old City, there are plenty of adorable heated outdoor patios to grab a drink and do a spot of midnight people-watching. Gather at the National Assembly Square and hop on a Ferris wheel while you wait for the stroke of midnight.

Spend the day skiing, indulging in winter activities or finding bliss in a whirlpool while gazing out at the Rockies. In the evening, explore Banff’s hip local food joints and head to Banff Avenue and Caribou Street on foot for the final countdown. You’ll find yourself in an authentic winter wonderland with alpine trees and beautiful fireworks while the clock strikes midnight. 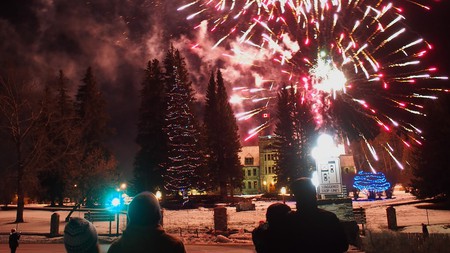 Segovia, one of Winnipeg’s best dining destinations, never takes reservations except on special occasions, including New Year’s Eve. Book a table and see off 2017 with amazing dishes such as the mushroom croqueta with truffle aioli; Iberico charcuterie; and the Santiago tart with cream, plum, and bee pollen. Cool kids will enjoy The Goodwill Social Club; it’s where the hip 20-to-30-somethings ring in 2018. Families will have the most fun at The Forks, a free New Year’s Eve event with festive lights, live entertainment, and fireworks, as well as activities for the kids, such as art stalls and horse-drawn wagon rides.

Calgary Olympic Park is a perfect place to bundle up with the family to enjoy a night of skating, music, family-friendly fun, and fireworks at midnight. Calgary Zoo offers an earlier New Year’s Eve celebration for little ones, as well as cozy fire pits, entertainment, and yummy hot chocolate. Visitors can also check out their ZOOLIGHTS programming, which includes a glittering wonderland in the ENMAX Conservatory. For those who are looking for something more sophisticated, like hors d’oeuvres and bubbly at midnight, there’s always the Mystique Ball or the Black and White Gala. 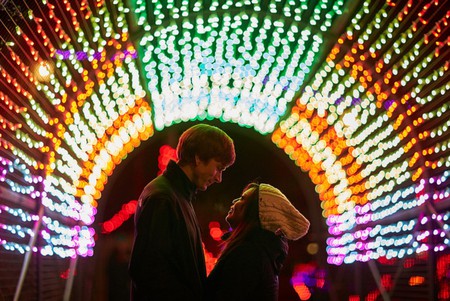 ZOOLIGHTS | Courtesy of Calgary Zoo
Give us feedback