A History Of The BeaverTail, The Canadian Doughnut 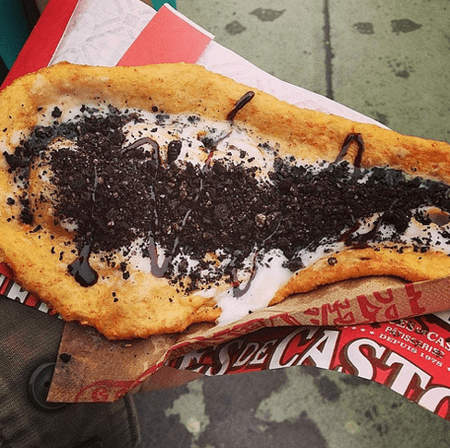 Is there a Canadian treat any more Canadian than the beloved BeaverTrail?The BeaverTail, a simple, hand-stretched wheat dough may be deep-fried like its counterparts – but distinguishes itself as a Canadian staple treat. We explore its legacy.

The beaver is Canada’s largest rodent and symbolic mascot — it’s no wonder it’s the namesake of this sugary staple. The beginning of its history can be traced back to the 19th century, when aboriginals would cook the tails of beavers over an open fire until the skin cracked and loosened, giving way to the meat inside. Taking inspiration from the traditional methods of cooking meat over an open fire, early settlers began to cook their bread in the same way. Using a dough that requires little to no rising, it was quick and easy to cook over an open fire, stretched over one or two sticks in the shape of a beaver’s tail. This bread is referred to as bannock, similar to the dough used for BeaverTails today, and is seen by many as the beginning of the quintessential sweet treat of Canada. It wasn’t until 1978 that BeaverTails Canada Inc., trademarked the dessert, laying claim to its official creation.

According to founder Grant Hooker, the recipe for this sweet indulgence came from his German-Canadian grandmother, who would make the bread for breakfast and top it with cinnamon sugar, butter and jam, or butter and honey. She called the deep-fried dough, ‘keekla‘(Küchl or Kökle), a German dish which means ‘little cake.’ Hooker and his wife, using his grandmother’s recipe, began to make the fried dough themselves using a clothes line to stretch the dough and old propane water heaters that ‘float cooked’ the dough in oil. The couple decided to sell the treats for the first time in 1978 at the Killaloe Craft and Community Fair, which embracing returning to its roots with an emphasis on ‘back-to-the-land counterculture.’ It wasn’t until Hooker’s daughter made the comparison of the ‘keekla’ to the shape of a beaver’s tail that the name was officially born, and by 1980, they were selling ‘Hooker’s All-Canadian BeaverTails’ at the ByWard Market.

Can't go to Ottawa without inhaling one of these 😏 #BeaverTails

This sweet indulgence is a national symbol of Canadian culture and cuisine and is sold across the nation, from Vancouver to Nova Scotia – it can even be found in the US. Fun fact: On his first official visit to Canada in 2009, Obama stopped at ByWard Market to grab a BeaverTail, giving media attention to the treat across Canada and the US, aiding in the creation of the ‘ObamaTail.’

The most popular topping is the traditional cinnamon sugar (just how grandma made it), although there are certain cities which boast their own local varieties: in Vancouver, you’ll find the salmon tail, topped with cream cheese and capers; in Mont Tremblant, you’ll be sure to see the much-loved ham-and-cheese tails, as well as the steak tails for meat lovers; there’s even a lobster tail in Halifax (lobster tail + beaver’s tail = magic). The richest tail — not meant for the faint of heart — is the ‘Triple Trip BeaverTail’: peanut butter, chocolate, and Reese’s Pieces candies.

In the words of Hooker himself, eat your BeaverTail ‘one bite at a time, from front to back (or back to front).’

Now, do yourself a favour, and go get a BeaverTail!