The Best Transport Routes: From Toronto to Niagara Falls 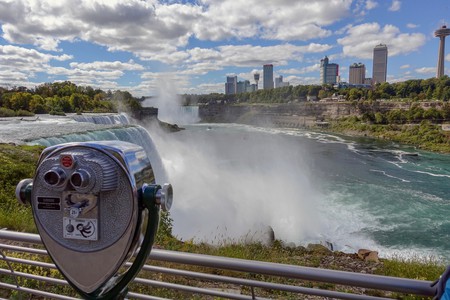 Planes, trains and automobiles are just a few of the ways you can get to Niagara Falls from Toronto. It can be a little confusing at times, so we’ve rounded up the seven best ways to get you to this incredible spectacle with comfort and ease.

One of Torontonians’ most beloved getaways is Niagara Falls. Offering views of one of the most majestic waterfalls in the world, a thriving wine scene and quaint Niagara on the Lake B&Bs – it’s the ultimate destination for rest and relaxation. While there are plenty of ways to make your way from Toronto to Niagara Falls, the routes can be tricky to navigate. We rounded up a handful of the best transportation options to get you onto the Maid of the Mist in no time. 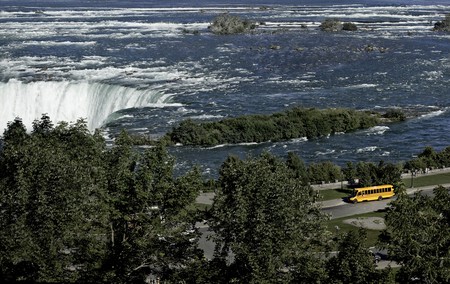 There is only one main bus terminal in downtown Toronto, though it can be tricky to find as it’s hidden around a corner behind Toronto Union Station. The easiest way to find the terminal is to head for the intersection of Bay Street and Dundas Street West. Walk north on Bay towards Edward Street and you’ll find the terminal entrance on the left-hand side.

Once you arrive at the bus station in Niagara Falls, you can walk directly downtown on a sunny day. If the weather isn’t great, we’d recommend ordering a taxi.

The Greyhound route is a great and reliable option. With four departures daily, you’ll arrive at your destination anywhere between 1 hour 30 minutes and 2 hour 30 minutes later, depending on traffic and the number of stops. Check the schedule beforehand, as there are direct routes running a few times a day. Book ahead online for fares of $18–30 here.

This is perhaps the easiest, cheapest and fastest option. Megabus leaves the bus terminal 13 times a day during the week and twice on weekends. These bus departures are also direct, eliminating the confusion that can come with transfers. Fares start at around $14 and go up to $24 during peak hours. The journey typically takes 1 hour 45 minutes, but can take up to 2 hours with traffic. Buy tickets ahead of time here to save a few bucks. 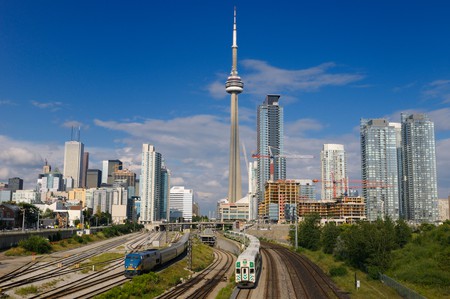 One of the most relaxing and enjoyable options to get to Niagara Falls is taking one of the trains out of the city. There are two providers leaving from Toronto daily: the GO Train (seasonal) and the ViaRail Train, both located in Toronto’s Union Station.

There is currently one daily ViaRail train from Toronto to Niagara Falls. Look for Train #97 on the screen at the station to find the platform number. The train leaves promptly at 8.20am from Union and gets in at 10.16am. There are multiple stops along the way. Ensure you triple-check the schedule for your return trip, as there is only one train back. You can check the timetable and purchase tickets here.

GO recently started offering Niagara weekend service year-round. What was once a special summer train now runs from 9.00am on the weekends, with return trips at 7.20pm and 11.00pm. They also offer a special Niagara Parks travel package including your GO Train ride and WEGO bus connections (local Niagara buses); the round trip between Union Station and Niagara Falls costs $30.

When the Niagara train isn’t available, the Lakeshore West GO Train to Burlington runs daily and from there, you can transfer to GO Bus Route 12 to get to Niagara. It will drop you off at the Niagara Falls Bus Terminal, across the street from the Niagara Falls Train Station. You can purchase your train ticket at the station, or pick up a Presto Pass and top up your card at train and subway kiosks, or at a local Shoppers Drug Mart. Be sure to tap your card at the station before getting on the train.

The address of Toronto’s Union Station is 65 Front St WToronto, ON M5J 1E3.

If you have your own car, getting to Niagara Falls is very easy. Driving between the two cities takes approximately 1 hour 30 minutes, largely depending on the crazy Toronto traffic.

Thankfully, the drive from Toronto to Niagara Falls is simple and quite scenic. From Toronto, hop on Queen Elizabeth Way (QEW)/403 towards Hamilton. Take the same route until you approach Niagara Falls, follow signs and exit onto ON-420/Niagara Veterans Memorial Highway East, which will bring you directly into downtown Niagara Falls. There is plenty of affordable parking to be found in the downtown core, or at your accommodation.

Whether you use Uber, Lyft or Facedrive, there are plenty of riders heading towards the Falls. Save gas and cut down on emissions by sharing a ride, plus you’ll likely get direct transport. Though it is a bit expensive, when split with a friend it will cost roughly $50 each way. Plus, it’s probably the most comfortable way to enjoy the drive.