The Best Places to See Totem Poles in Canada 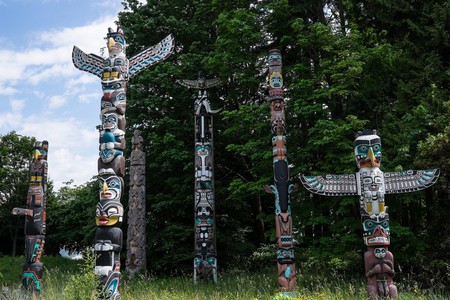 Totem poles are spiritually significant to First Nations people in Canada, as they serve as signboards, genealogical records, and memorials. The First Nations of Canada’s Northwest Coast created them, and that is why so many of them stand in British Columbia. Keep reading to discover where you can see the finest totem poles in the Great White North. 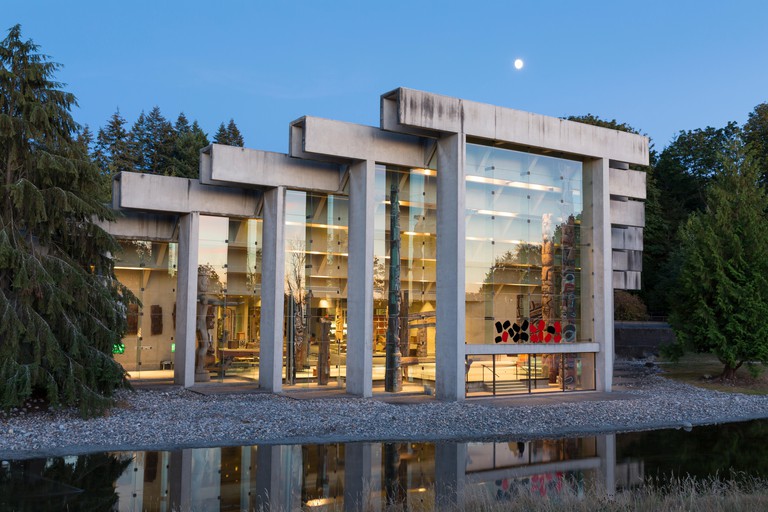 The Museum of Anthropology sits on the University of British Columbia campus | © Paul Christian Gordon / Alamy Stock Photo
Vancouver’s award-winning Museum of Anthropology is home to one of the best collections of Northwest Coast First Nations art in the world. The building itself comes from the mind of famed Canadian architect Arthur Erickson, who drew inspiration from the post-and-beam structures of the First Nations. In the museum’s Great Hall, visitors will find totem poles and other artifacts from the Kwakwaka’wakw, Nisga’a, Gitxsan, Haida, and Coast Salish people. Outside, there are two Haida buildings, as well as many totem poles designed by some of today’s finest contemporary First Nations artists.
Open In Google Maps
6393 Northwest Marine Drive, UBC, Vancouver, British Columbia, V6T 1Z2, Canada
+16048225087
Visit Website
Give us feedback

Kitwanga (also known as Gitwangak) is a small village located in northern British Columbia, near the junction of the Stewart Cassiar and Yellowhead Highways. Kitwanga Fort National Historic Site was the location of battles between local First Nations clans over two centuries ago. There are more than 50 totem poles within an hour’s drive of the village, and some have stood for over 100 years. Neighbouring Gitanyow (also known as Kitwancool) used to have the largest collection of original totem poles of any Coastal First Nations village, with about 20 remaining today.

There are nine totem poles located at Stanley Park’s Brockton Point, which the City of Vancouver says is BC’s most visited tourist attraction. The totem pole collection began in the 1920s when the city bought four totems from Alert Bay on Vancouver Island. Totem poles from Haida Gwaii and BC’s Rivers Inlet were then added to the collection. The most recent totem pole was erected in 2009 and carved by Robert Yelton of the Squamish First Nations. Ensure you find the totem poles in Stanley Park on your next visit to Vancouver.
Open In Google Maps
Vancouver, British Columbia, V6G 1Z4, Canada
+16046816728
Visit Website
Give us feedback

Located in Jasper in the Canadian Rockies, the Two Brothers Totem Pole was erected in 2011 to replace the Raven Totem Pole, which had stood for nearly 100 years. It took many people to erect the 13.7-meter-tall (45 feet) totem pole, which features the traditional Haida colors of red, black, and blue. Jaalen and Gwaii Edenshaw carved the totem pole; they also illustrated a book Parks Canada published, called The Two Brothers, A Haida Story. The book speaks of an “unusual connection between two very different places,” and was published in Haida, English, and French. 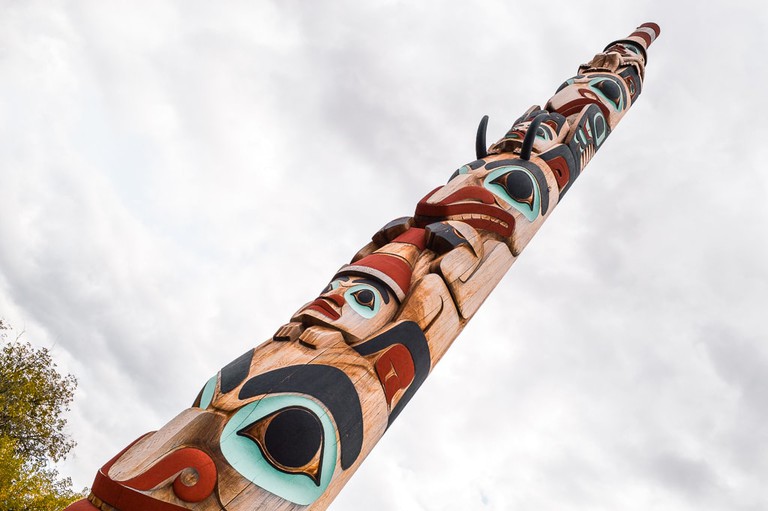 Looking up at the Two Brothers Totem Pole | © Hayley Simpson

In northern Vancouver Island, visitors will find the (disputed) world’s largest totem pole, standing at 52.7 meters (173 ft). It’s disputed as the totem is not carved from one pole, but rather two, which some people believe does not make it the largest. The 13 figures on this totem pole represent the many Kwakwaka’wakw First Nations tribes. There are also many memorial totem poles at the Namgis Burial Grounds in Alert Bay. Visitors are not permitted on burial grounds, but the totem poles are visible from the road. 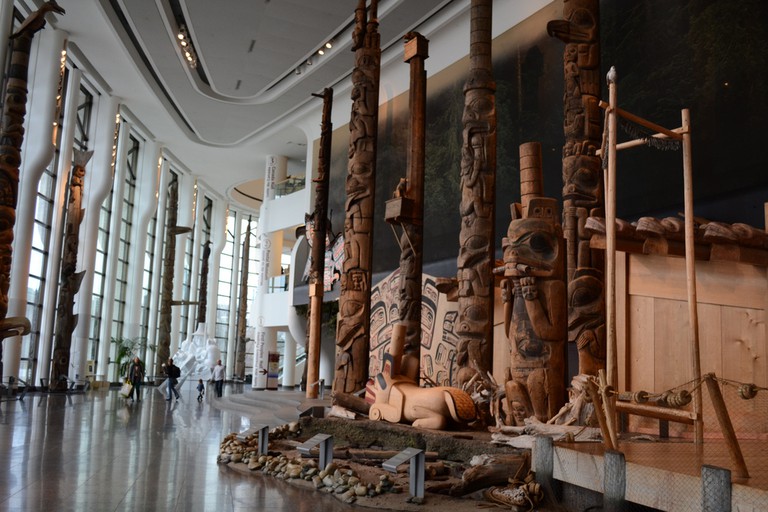 Inside the Grand Hall | © Shankar S. / Flickr
The Canadian Museum of History is the nation’s most visited museum. Located in Ottawa, the museum’s Grand Hall houses the world’s largest indoor collection of totem poles. There are six Native houses represented, plus two exhibitions: First Peoples of the Northwest Coast and From Time Immemorial — Tsimshian Prehistory. The Grand Hall—also known as the museum’s architectural masterpiece—offers visitors a fantastic introduction to the history and culture of the Northwest Coast’s First Nations people.
Open In Google Maps
100 Rue Laurier, Hull Gatineau, Québec, K1A 0M8, Canada
+18197767000
Visit Website
Visit Facebook page
Give us feedback

There are several places around Haida Gwaii (formerly the Queen Charlotte Islands) where you can view totem poles. Firstly, there are many located around Old Massett on Graham Island. Visitors recommend going on a self-guided totem pole walking tour. Many totem poles also stand around the abandoned village sites on Moresby, Hot Spring, and Anthony Islands. The village of Ninstints is home to 26 totem poles, and there are some other examples located outside the Haida Heritage Centre too. 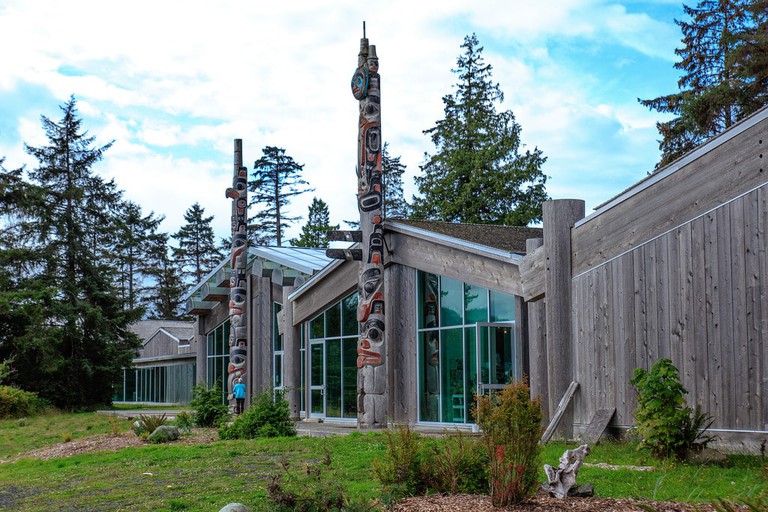 Located on BC’s Sunshine Coast, Sechelt and the surrounding area is home to various totem poles, which depict the cultural history of the Shíshálh (Sechelt) First Nations, as well as other groups. The Sechelt First Nations were Canada’s first band to achieve self-government. Many totem poles include figures of wolves, grizzly bears, orcas, frogs, and eagles, which represent the Sechelt First Nations clans. Sechelt Visitor Centre has published a handy guide for visitors who want to see the various totem poles, but a popular place to visit is Trail Bay, where there are 12 Coast Salish totems.