Breathtaking views at Cypress Mountain © Jennifer C. / Flickr
Whistler is a popular winter destination in British Columbia, as the small ski town has two mountains within walking distance from the village. However, there are many excellent ski mountains and resorts in Western Canada that can offer skiers an entirely different experience; here are ten other places to ski in British Columbia and Alberta.

Ski Resort
A frozen Lake Louise and its resort | © Wilson Hui / Flickrc
Lake Louise Ski Resort is one of three resorts located near Banff, Alberta and is known as the ‘granddaddy’ of ski resorts in Canada. With over 4,000 acres of terrain, 139 runs and nine lifts, skiing in this UNESCO World Heritage Site among the Canadian Rockies is an experience not to be missed.
More Info
Open In Google Maps
1 Whitehorn Road, Lake Louise, Alberta, T0L 1E0, Canada
+14035223555
View menu
Visit website
Visit Facebook page
Send an Email
Give us feedback

Ski Resort, Skate Park, Sports Center
Located 45 minutes north of Kamloops in central British Columbia, Sun Peaks is a large resort known for its family atmosphere. Visitors can easily ski in and out of the village and 80 percent of the accommodation options, which makes for an easy ski vacation. There are eleven lifts on the mountains to take skiers to 122 different runs, so visitors definitely won’t get bored at this resort.
More Info
Open In Google Maps
1280 Alpine Road, Sun Peaks, British Columbia, V0E 5N0, Canada
+12505787222
View menu
Visit website
Visit Facebook page
Send an Email
Give us feedback

Along with Lake Louise Ski Resort and Norquay, Sunshine Village is the final piece of Banff’s SkiBig3 puzzle; it’s located 15 minutes outside of Banff and is in the middle of the pack. Sunshine Village is larger than Norquay and has a steep terrain with plenty of snow (some say the best snow in the Rockies). Ski Canada magazine even awarded the mountain the best view from the best off-piste run for Delirium Dive — just don’t get too distracted! 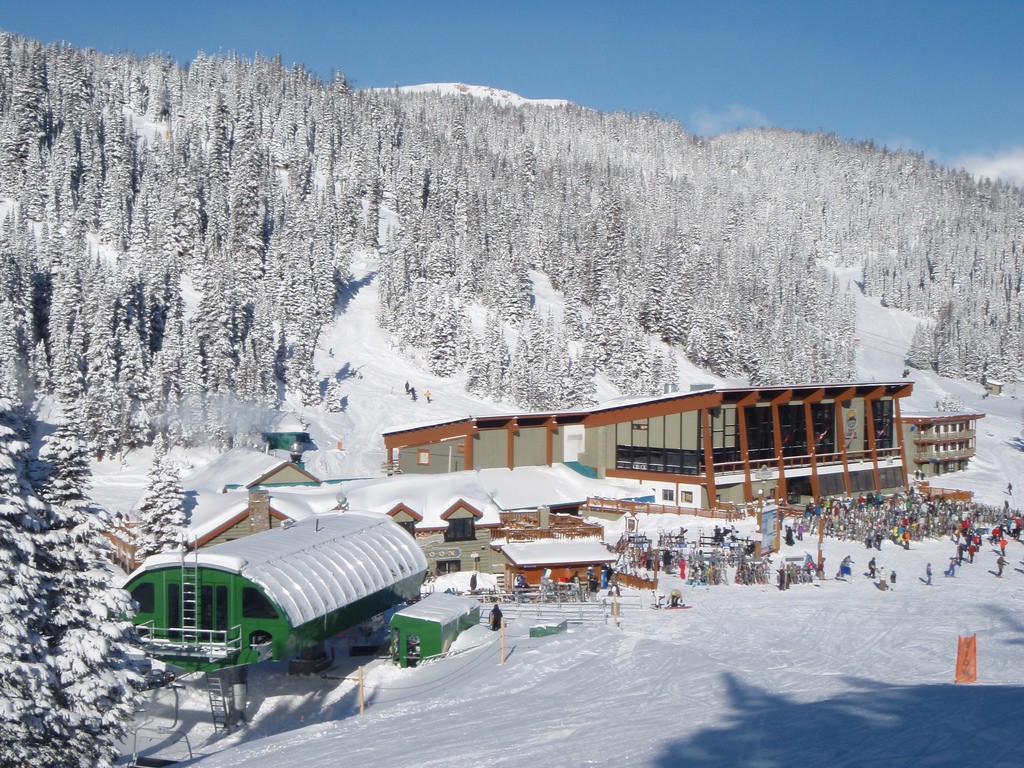 Sunshine Village is known for its incredible views © Sergel / Flickr

Resort, Hotel, Ice Hotel
Many people say that skiing and snowboarding at Kicking Horse Mountain Resort can feel like being kicked by a horse. 60 percent of the mountain’s tracks are for advanced skiers and some slopes used to only be accessible to heliskiers; it has the fourth largest vertical drop in North America, too. When you are finished being kicked by the mountains, you can relax in the town of Golden, which is right on the Alberta border.
More Info
Open In Google Maps
1500 Kicking Horse Trail, Golden, British Columbia, V0A 1H0, Canada
+12504395425
View menu
Visit website
Visit Facebook page
Send an Email
Give us feedback

Ski Resort, Skate Park
Silverstar Village offers a variety of activities | © Chris Davies / Flickr
Although you go to Silver Star Mountain Resort for the skiing, stay for the charm of its village. It was built in the 1980s to resemble a colourful 19th-century mining village. One side of the Victorian-style village opens right onto the slopes too – it doesn’t get any more convenient than that. There’s also a natural ice rink, tubing, snowshoeing, winter mountain biking and more waiting for you at Silver Star Mountain Resort.
More Info
Open In Google Maps
123 Shortt Street, Silver Star Mountain, British Columbia, V1B 3M1, Canada
+12505420224
View menu
Visit website
Visit Facebook page
Send an Email
Give us feedback

Ski Resort
Whitewater Ski Resort is located a 15-minute drive from Nelson in southeastern B.C. With only 20 percent of runs for beginners and an annual snowfall average of 12 metres (39 feet), this is a resort targeted toward intermediate and advanced skiers and snowboarders. Although there is no resort on the mountain, Nelson is known as B.C.’s heritage capital and has plenty of inexpensive accommodation options to choose from.
More Info
Open In Google Maps
602 Lake Street, Nelson, British Columbia, V1L 4C8, Canada
+12503544944
View menu
Visit website
Visit Facebook page
Send an Email
Give us feedback

Ski Resort
Revelstoke is a relatively new resort, as up until the 2007/08 season it was just a hill for locals with only one lift. Now, it’s home to the biggest vertical drop in North America at 1,713 metres (5620 feet) and its longest run is an incredible 15.2 kilometres (9.4 miles). It has also been referred to as the world’s heliskiing capital. The mountain is still undergoing expansions, but when those are complete people believe Revelstoke will be one the world’s top skiing destinations.
More Info
Open In Google Maps
2950 Camozzi Road, Revelstoke, British Columbia, V0E 2S1, Canada
+12508140087
View menu
Visit website
Visit Facebook page
Send an Email
Give us feedback
Give us feedback