Maple syrup snow taffy uses a nifty and innovative method to transform plain syrup into an edible snack on a stick.

Using pure, clean snow, the hot open-pan maple syrup is boiled up and then poured and cooled directly onto the cold snow, which creates a soft, taffy-like food. 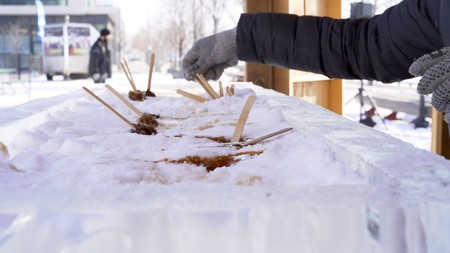 At the Sugar Shack Festival, all things maple syrup are celebrated | © Culture Trip

Maple syrup has many versatile uses and is a fond favorite accompaniment to pancakes, waffles and BBQ dishes. But this new way to consume the tasty treat has really taken off with fans around the world.

While it can come from a number of species, maple syrup is usually made from the xylem sap of sugar maple, black maple or red maple trees. Before winter, these trees convert sugar made by the leaves into starch, which is stored in their trunks and roots, and the starch is then converted back into sugar in late winter and early spring in the sap.

By drilling holes into their trunks and collecting the exuded sap, maple syrup is harvested and then processed by heating it to a temperature that evaporates much of its contained water. The end residue of this process is the concentrated syrup.

The indigenous people of North America were the first to make and use maple syrup. Later adopted by European settlers, various states of refined production came about. The last few decades have seen technological advancements in the processing chain; however, Canada, and more specifically the province of Quebec, still remains the largest producer globally.

The Sugar Shack Festival in Toronto is a celebration of all things maple syrup and has been a crowd favorite for many years. Serving up authentic maple snow taffy isn’t the only treat on offer, with maple-infused treats available across the weekend-long celebration that pays homage to the traditions of the past whilst exploring its French-Canadian roots. Interactive games, activities for families and kids and live music all combine to honor the wonders of maple syrup and this quintessentially Canadian lollipop – all making for an unforgettable day out.