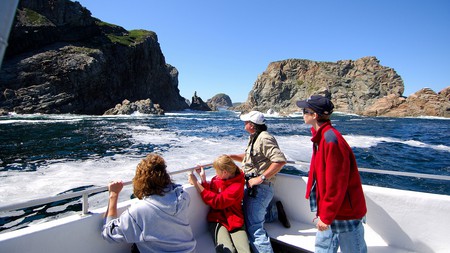 The coastline of Newfoundland and Labrador, Canada’s easternmost province, measures more than 29,000km (18,000mi). Newfoundland’s nickname, the Rock, hints at the rugged stretches of coastline.

Walking along clifftop footpaths and sandy beaches is a great way to explore the coastal landscapes. Participating in whale-watching tours and paddling sea kayaks bring opportunities to view seabirds and marine wildlife. This destination offers a wealth of coastal adventures – here’s our selection of the best.

Its proximity to the Atlantic Ocean has helped forge Newfoundland and Labrador’s unique character. Fishing communities dot the coast and taking to the water is part of life. You’ll find numerous opportunities for boat tours while exploring Newfoundland.

St. John’s, the provincial capital and most populous city, has evolved around its sheltered waterfront. The Narrows guard the harbour entrance like purpose-built sentinels. You can see these craggy rocks from aboard the MV Cetacean Quest during a whale-watching and wildlife-viewing tour. Two-hour round trips to Cape Spear, the easternmost point in Canada, depart from pier six. 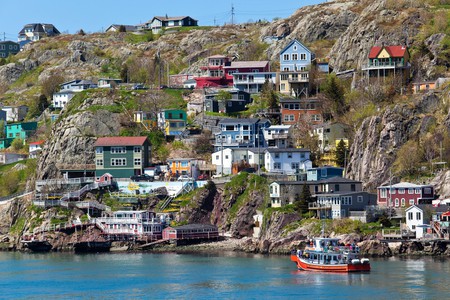 The Battery, in St. John’s, is peppered with multicolored cliffside houses | Courtesy of Newfoundland and Labrador Tourism

As many as 22 whale species, including minkes and orcas, spend time in the waters off Newfoundland and Labrador, making it one of the world’s best whale-watching destinations. The food-rich Atlantic Ocean off the Avalon Peninsula provides an ideal habitat for one of the densest humpback whale populations in the world. The peak time for viewing them breaching is from June until mid-August.

Significantly smaller but no less spectacular, silvery fish known as capelin roll onto the beaches in their thousands while spawning, usually during June and July. Their shoals frequently attract humpbacks to feed closer to shore. The annual spectacle also draws locals to watch and gather floundering fish at the likes of Middle Cove Beach, approximately 12km (7.5mi) north of St. John’s.

Sightings of almost 400 bird species have been recorded in Newfoundland and Labrador, so pack your binoculars. The provincial bird is the Atlantic puffin, easily identifiable thanks to its multicolored beak. From springtime into September, 260,000 pairs of puffins nest on the four rocky islands of Witless Bay Ecological Reserve, 35km (22mi) south of St. John’s. Boat tours departing from nearby Bull’s Bay give you an opportunity to view North America’s largest breeding colony of puffins and the continent’s second biggest population of Leach’s storm petrel. 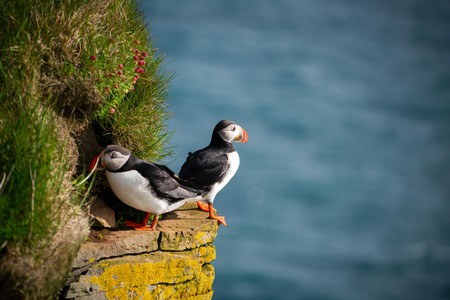 Coastal hiking trails also bring opportunities to spot bird species, marine wildlife and members of one of the world’s most southerly caribou herds. Pack your walking boots and pick your next adventure from the East Coast Trail’s 25 paths. They vary in difficulty – from the easy Silver Mine Head Path, between Torbay and Outer Cove, to the strenuous Piccos Ridge Path.

Enjoy early starts? Feel the warmth of Canada’s first rays of daily sunlight while viewing the sunrise on the Cape Spear headland. Newfoundland and Labrador’s oldest surviving lighthouse was built on the cape in 1836 to warn sailors away from the perilous rocks. Parks Canada guides now lead tours of this National Historic Site. If you appreciate history, set aside an hour to explore the bunkers and concrete tunnels of Cape Spear’s World War II Battery. 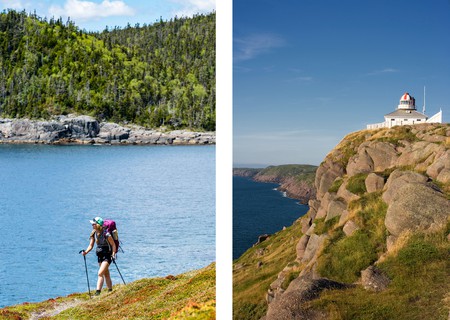 The Colony of Avalon, one of the oldest English settlements in North America, is a 20-minute hike from Ferryland Lighthouse. Construction of the clifftop beacon began in 1870. In recent years the lighthouse has won a reputation for packing one of the province’s best picnic hampers. Pre-ordering is essential. Grab a blanket and nibble sandwiches and cake while scanning the sea for whales and icebergs.

From April into June, you’ll have opportunities to see icebergs drifting southwards in the stretch of ocean known as Iceberg Alley. Boat tours from Twillingate, midway up the island, afford ample opportunity to photograph the mountainous chunks of ice, most of which have calved from western Greenland’s glaciers. Sitting low on the water’s surface on a guided kayak tour gives you a real sense of their enormity, and you’re in a prime position to hear the icebergs creaking. 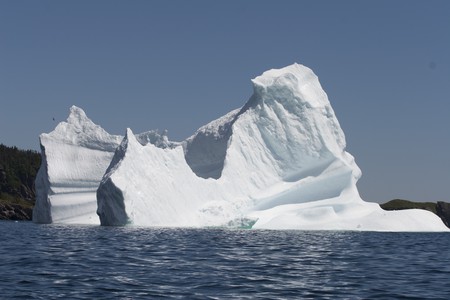 Take a twin-engine boat out from the small town of Springdale with Green Bay Eco Tours, of Hall’s Bay, and you’ll get the chance to see bald eagles; meanwhile, the Newfoundland tradition of a beach boil-up gives you the chance to view marine wildlife while locally grown and caught food simmers over a campfire.

For sea swimming that can help loosen tight muscles after hiking, head to Shallow Bay Beach, in Gros Morne National Park. The sandy beach stretches 5km (3mi) and it’s directly north of Cow Head, where exposed stratified rock – from the Ordovician period more than 400m years ago – juts by the shore. Look closely and you may identify fossilised outlines of early life forms.

Sea-eroded rocks, which give Arches Provincial Park its name, are highly snappable, so if you enjoy photography, consider packing a tripod. Low levels of light pollution make star-speckled night skies in rural Newfoundland a joy for astrophotographers. 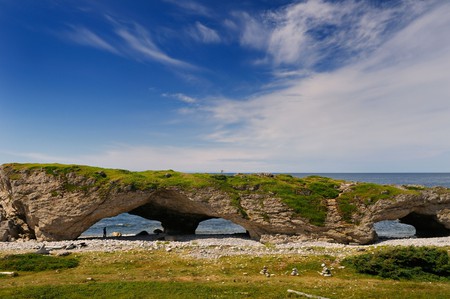 St. Anthony proves a good base for exploring Newfoundland’s historic Norse connections and hiking in Fishing Point Municipal Park. Follow the Dare Devil Trail to peer over coastline from Fishing Point Head. For insights into local wildlife, listen to the naturalist on board a 2.5hr tour with Northland Discovery Boat Tours. Less than an hour’s drive away is L’Anse aux Meadows National Historic Site, the only authenticated Viking settlement in North America and the earliest evidence of European settlement in the New World. The archaeological significance of this Unesco World Heritage site is matched by its rugged beauty and potential for adventure, with re-enactors on hand to guide you through the area’s history and mythology, and help you learn everything from blacksmithing to weaving.

In addition to planning activities, remember to factor plenty of sightseeing pauses that will allow you to really take in the coastal landscapes on the road trip between St. John’s and St. Anthony. 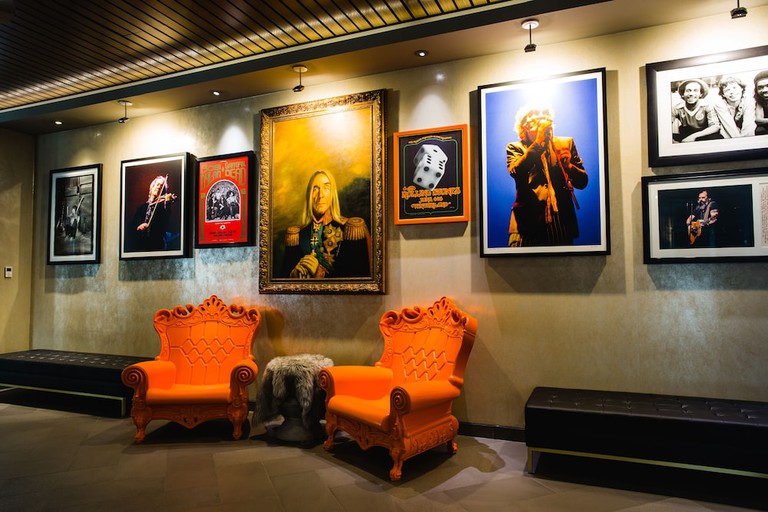 Courtesy of Jag Boutique Hotel / Expedia
View Rooms
From $106 per night per room
Conveniently placed for exploring downtown St. John’s, the JAG Hotel overlooks the harbour. Relax in stylish rooms and listen to JAG Radio before a night out on nearby George Street. Set yourself up for the day with breakfast at the Exile Restaurant, or plan a laid-back weekend brunch.
More info 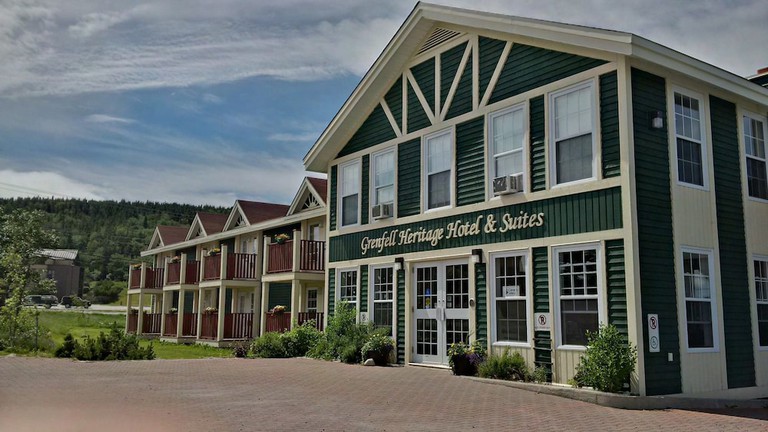 Get inspired and start planning your Newfoundland and Labrador adventure at newfoundlandlabrador.com