Declaring that he was ‘sick of that purity’, Canadian painter Philip Guston abruptly switched from gestural, abstract expressionist paintings to grotesque figurative ones, and has since become an iconic anti-establishment figure in the visual arts. He also became the pioneer of raw, loose figuration at a time when abstraction was seen as the avant-garde visual language par excellence. 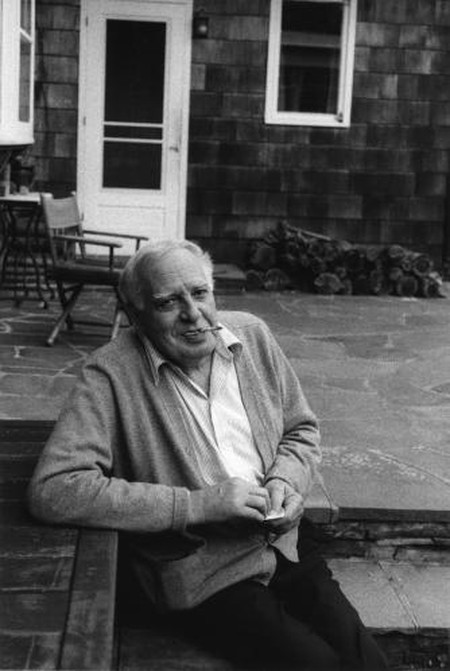 Philip Guston: The Late Works, a retrospective of Guston’s oeuvre that was on view at the Schirn Kunsthalle in Frankfurt, Germany, in early 2014, was organised to commemorate the artist’s 100th birthday. The works in the show marked a decidedly gross rupture with abstract expressionism: a movement with which Guston had achieved early success as one of its practitioners, but with which he was ultimately disillusioned. Already by the end of the 1950s, Guston was veering towards the fringes of the movement, and it seems that he was already feeling as an outsider looking in.

Born in Montreal, Canada in 1913 to Ukrainian-Jewish parents, Philip Goldstein moved to California as a child. Showing skill and talent from an early age, he enrolled in various art academies, but remained largely self-taught. He eventually moved to New York, where he joined the abstract expressionist ranks. His works of the 1940s and 50s are a playful mesh of colour, loose grids, and a limited palette of pinks, whites, and grays that was to be echoed in his later figurative work.

However, after being continuously disillusioned by what he saw as limitations, he moved to Woodstock, New York, diminished by an existential crisis. Focusing mainly on drawing at first, Goldstein (who had by now changed his name to Guston) went on to produce some of the most bizarre and polemic imagery of post-war American art. Proclaiming that he now wanted ‘to tell stories’, the resulting oeuvre remains polarising. 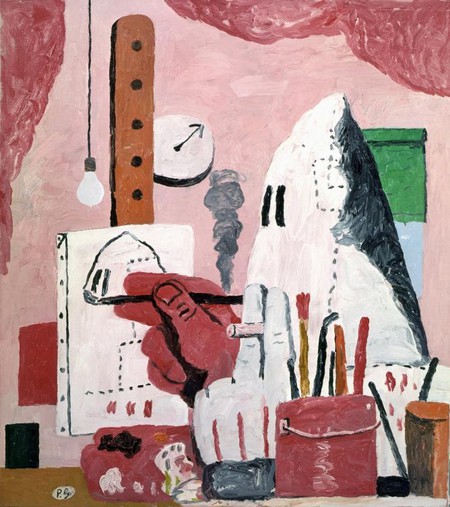 The artist in his studio, 1969, Oil on Canvas | © The Estate of Philip Guston

‘The Artist in His Studio’ makes it hard for us to disagree, at first instance, with the derogatory comments used against Guston as a painter of ugly pictures. A head with Ku Klux Klan attire seems to be focused on painting a self-portrait while smoking a cigarette. A single light bulb is dangling overhead, accompanied by a clock, reminding the painter of outside time. The painting is unrefined, loosely painted, and sombre. The Ku Klux Klan costume is an obscure reference to Guston’s experiences with racism as a Jewish immigrant in early 20th century California. Perhaps this is Guston’s idea of self-mockery and the composition is full of black humor and cynicism. 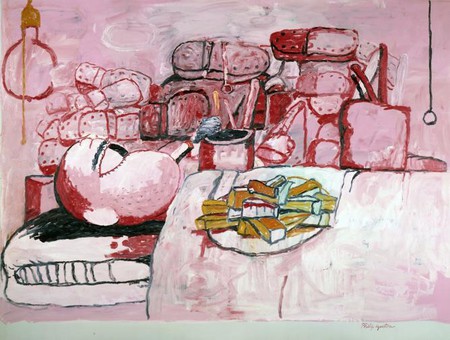 An alternative, more cogent interpretation would be to see these images as references to allegory and vanitas, moral parables and stories told through the use of symbols. In the foreground, for instance, we can see the tools of the painter’s trade: a palette for mixing colour, brushes, and some jars, the reminders of his mortal toil. A loose brushwork of gray paint stands in for cigarette smoke, a favorite pastime of the existentially inclined. Guston clearly leaves all of these objects to be scrutinised and evaluated as symbols of something else, up to the viewer to decide. The Ku Klux Klan head is reminiscent of death’s head, a reminder of his mortality. Considering Guston’s work in the wider context of symbolism, time is frequently represented in painting as a reminder of our limited lifespan. The self-portrait is a metaphor for our obsession with selfhood, a critique of the sheer futility of constantly trying to evaluate how we, and indeed others, see us. 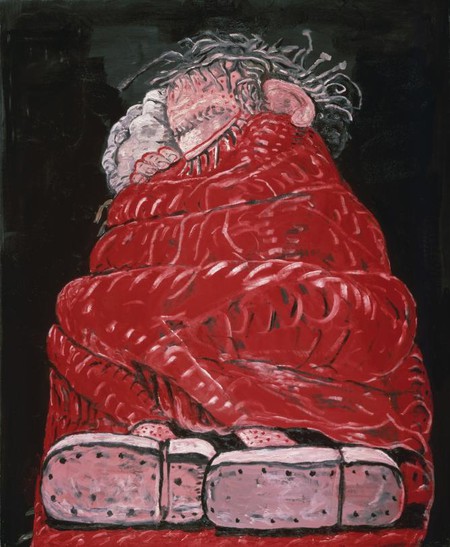 Guston’s existential dilemmas are garishly manifested in The Web, a nightmarish composition of a splayed Cyclops’s head surrounded by arachnids. Guston recurrently employs the motif of the Cyclops, the one-eyed monster, as a brooding, comical stand-in for himself. Sometimes he is seen eating, drinking, smoking, sleeping, unshaven, with hairy arms and legs. Here, a spider’s web stands over the looming eye, apparently lying in a pool of paint: the spiders come to feast, it seems, on the remainders of this poor, fatigued soul. This kind of bleak humour is typical of Guston’s late work: it is a constant search for a visual language to examine his condition as an individual in the midst of absurdity and bleakness. In this sense, it is also apposite to consider the artist’s illustrations of poems, Poem Pictures, where a mixture of comedy and tragedy, text and image, highlight the sensation of Guston trying to ‘mimic’ a poetic language through the use of symbols. 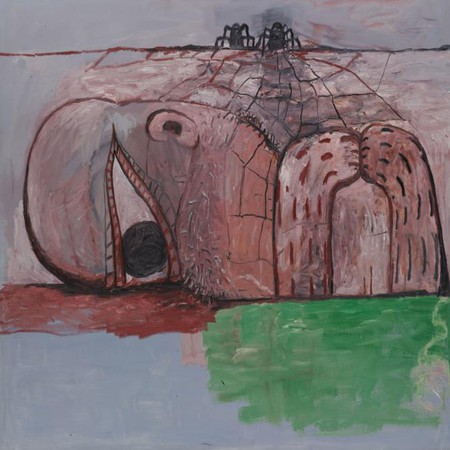 In Discipline, Guston is at his most political. Fists symbolise rage and aggression, while submissive feet tremble under a bloody club. Guston grew up and lived in a very tumultuous social environment, fleeing Jewish persecution in the Ukraine, and having to live under the pressure of racism and prejudice in the USA (a band of Ku Klux Klan members reportedly destroyed one of his exhibitions). He constantly addresses the issues of violence and racism under oppressive regimes, and perhaps it was indeed this political dimension and social engagement of painting that was lacking from abstract expressionism and which Guston wanted to emulate from artists such as the Mexican Muralists. His switch from abstract expressionism to low-brow aesthetics certainly had political undertones, and his unrefined figuration has a sense of wanting to be more ‘of the people’ than the esoteric, high-mindedness of abstraction. 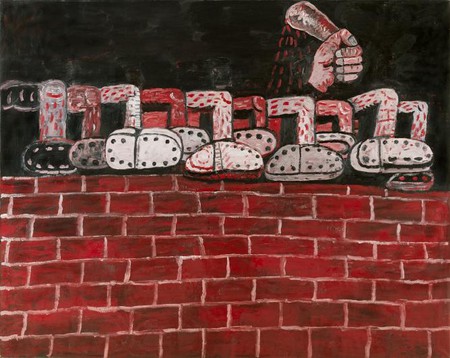 In the end, however, Guston seems to understand that what can be accomplished as a human being is relatively inconsequential. Creation, for Guston, is the only reasonable answer to human discontent, whether political or existential. It appears that telling stories, drawing lines or brushing colour are the only ways the Cyclops can make sense of anything. A giant hand reaching down through the clouds paints a line on the ground as if to prove this point. 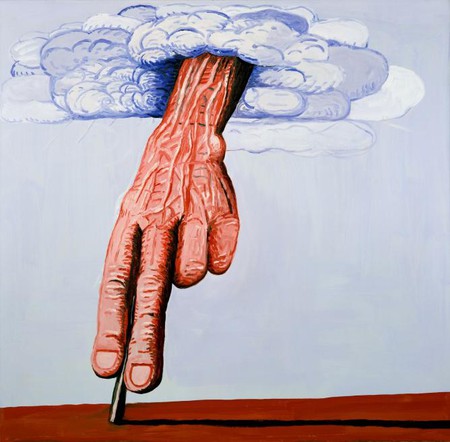 Philip Guston: The Late Works was on view at the Schirn Kunsthalle, Frankfurt, until 2 February 2014.