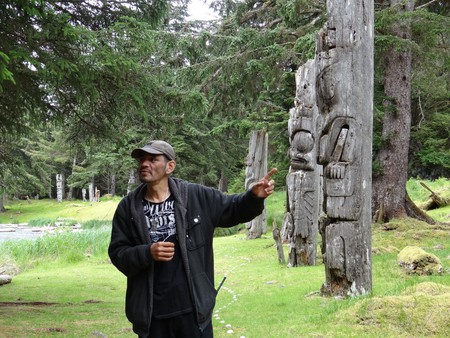 The watchmen of Haida Gwaii have protected the Canadian archipelago for millennia. Today, their descendants return to these rugged islands over the summer months to keep the artefacts of their ancient ancestors safe.

It is hard not to feel guilty while being shown around an abandoned village by the last survivors of a tribe almost exterminated by contact with people like you. But ‘Killer Whale Woman’, or Kelsie to her friends, doesn’t bear any grudges against white folk.

This smiley twenty-something from the Haida First Nations people is a student for most of the year, but in the summer she and several other Haida watchmen and women take up isolated posts, such as Skedans, T’aanuu and SGang Gwaii, on islands cast adrift in the North Pacific.

Kelsie has been posted to Skedans, an abandoned village on Louise Island. It is easy to see why the Haida people chose this place, ranging their longhouses at the back of an idyllic sheltered beach. But their houses have since been reclaimed by carpets of moss and their remaining totem poles are so badly weathered that without Kelsie’s guidance we’d never have been able to identify the multiple carvings of mythical ravens, eagles, bears and thunderbirds. 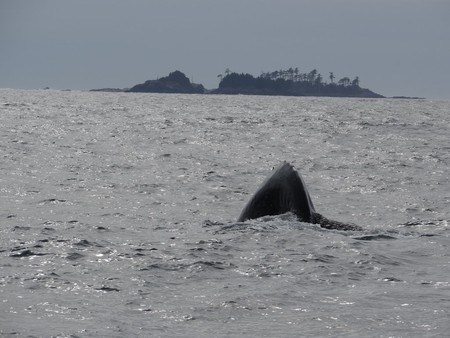 Haida Gwaii has famously diverse wildlife: the waters around these stunning islands are home to humpback whales, colonies of endangered Steller sea lions and tufted rhinoceros auklets, earning it the nickname the ‘Galápagos of the North’.

For an estimated 20,000 Haida people, with their deep respect for all the supernatural beings of the forest and seas as recorded on their poles, this was a bountiful paradise. At least it was until the early 20th century, when the white traders and settlers started to arrive.

Within a handful of decades, the villages had been all but emptied by a mix of smallpox and gunfire, and the best of their totem poles disappeared, too, only to reappear in collections at the likes of New York’s Metropolitan Museum and London’s British Museum. 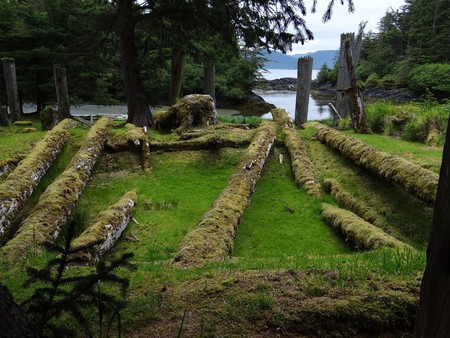 For around 100 years, the threadbare tribe slipped off the radar, until their homelands came under threat from the Canadian logging industry. Confrontations between the Haida and the loggers came to a head in 1987, when their high-profile campaign of resistance became a focus for aboriginal rights across the world.

Some of the tribe were imprisoned during the confrontations, but international outcry led to the formation of Gwaii Haanas, a national park with heritage status. The last enfeebled settlements were evacuated, and today the only remaining inhabitants are seasonal Haida watchmen and women like Kelsie.

For outsiders like me, lucky enough to be one of just 3,000 visitors given permission to enter Gwaii Haanas every year, meeting these Haida guardians and witnessing how they cherish their abandoned homelands is an incredibly moving experience not soon forgotten. 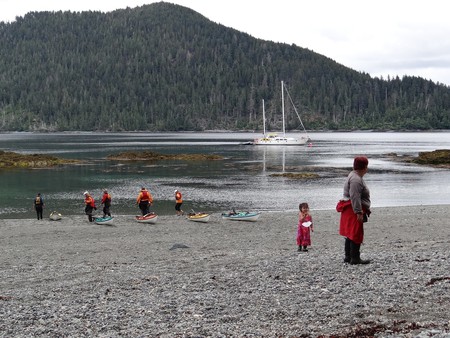 We meet Walter, Mary and their four-year-old granddaughter Raven on T’aanuu, south of Louise Island, where they show us around the skeletal remains of a Haida village.

Raven’s mother was struggling with addiction, so Walter and Mary were raising her in the homelands, among bear and deer. ‘She’s more afraid of dogs and cats.’

On Windy Bay, ground zero for the confrontations in 1987, Sean, a scientist and tree expert, leads us to a Tolkienesque landscape of massive cedar and Sitka spruce – bearded with wispy lichen – and shows us how the Haida used the bark for roofing and weaving.

We then meet Ken at SGang Gwaay, one of the most remote UNESCO Heritage Sites in the world and home to 400-year-old totem poles that are slowly rotting away.

Ken is a totem-carver himself, and as he takes us along the line, he tells us how he learned his trade from his uncle ‘by washing my hands in water under his’. He explains the significance of each figure represented, and describes how, under firelight, they seem to come alive.

He tells us about his daily life on the island and how he still lives on what he can catch or collect, for ‘when the tide is low, the table is set’. This means he lives on a diet of ling cod, pink salmon, halibut and scallops –the sort of food you’d pay top dollar for at a restaurant.

Clearly, for him, the Haida lifestyle was still there to be lived. For us outsiders, it was a rare privilege to be allowed inside this unique community protecting this fairy-tale land for future generations.