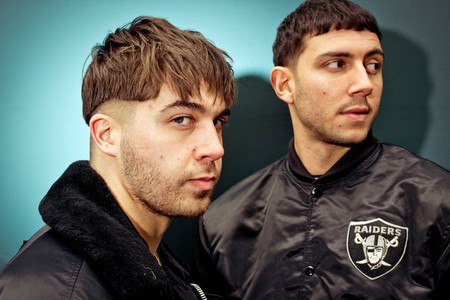 Some people may think that OVO Sound, Drake’s musical project, is just a record label – but it’s more than that. Co-founded along with producer Noah ’40’ Shebib and Oliver El-Khatib, OVO is full of artistic expression and talent. One of the breakout acts of the label is the talented young group, Majid Jordan. This pop and R&B duo may seem like an outlier in OVO’s rap and hip-hop scene, but they’re changing the sound of the label. After meeting at the University of Toronto, Majid Jordan has steadily grown a large fan base not only in Toronto but also around the world, which just might rival that of Drake’s one day.

Read our interview with @nytimes

Majid Jordan is made up of two Toronto locals: singer Majid Al Maskati, originally from Bahrain, and producer Jordan Ullman. They met at Majid’s 21st birthday party in 2011 while attending the University of Toronto and hit it off right away, talking about their like-minded tastes in music and planning studio sessions times together (putting normal awkward party small talk to shame, no doubt). Showing both their ingenuity and drive, Ullman and Majid began working from Ullman’s dorm room and his parents’ basement to create and record music, finally launching their first EP titled Afterhours on SoundCloud under the pseudonym Good People.

Producer Noah ’40’ Shebib was impressed by Majid Jordan’s EP and signed them to Drake’s label, releasing their first official single as a duo in 2014 on SoundCloud. Ten days later, they released their official debut EP, A Place Like This, as well as music videos for three of the songs: ‘A Place Like This,’ ‘Her,’ and ‘Forever.’

MJ officially made their mark on the map when they co-produced and were featured on Drake’s chart-topping song ‘Hold On, We’re Going Home,’ which went on to be Drake’s most successful single in the US, Canada, Europe, Australia and New Zealand (also serving as the anthem of every inebriated cab ride home).

Their first studio album, recorded under the OVO label, was released on February 5, 2016, under the self-titled name Majid Jordan, which features a song with Drake called ‘My Love.’ Even though the title is simple, their new album’s sound is incredibly poignant and distinct to other OVO rap artists. Majid Jordan also released their first-ever North American tour shortly after the release of their album.

How does Toronto influence your sound?

Under OVO, Majid Jordan is creating a new sound with influences ranging from ’90’s Sade to contemporary R&B. A single off the album, ‘King City,’ combines talented vocals with ’80’s synth beats, and the video, recreating a scene from the 2011 film Drive, builds on these ’80’s vibes and tones. It is nostalgic, but modern, with impressively high vocals. The song’s lyrics are simple, starting with the line ‘love makes you crazy,’ and draws out the words to make the lyrics almost indistinguishable, losing the listener to the melody of the operatic voice. The singing is reminiscent of a lullaby but is backed up by a low synth beat, which shows that MJ is reinventing old sounds by adding funk and melodic tunes, bringing a different sound to OVO alongside the usual rap and more aggressive music of the other artists.

Majid Jordan gives a lot of credit for their newfound success to producer and co-producer of OVO sound, Noah ‘40‘ Shebib. MJ says, ‘[…] the first person we usually take our music to is 40.’ With help from producers like 40, and the other OVO talent, Majid Jordan is bound to be a huge Canadian and international success. Catch their three new singles including, ‘Something About You,’ ‘King City,’ and ‘My Love,’ featuring the 6ix’s very own, Drake.

Missy Amato is a writer and Nicki Minaj-like poet from Queens, New York with a passion for the sixth. I’m a professional bread eater, lyric memorizer, and love for all things OVO. Catch more writings from Missy on her facebook. #6god